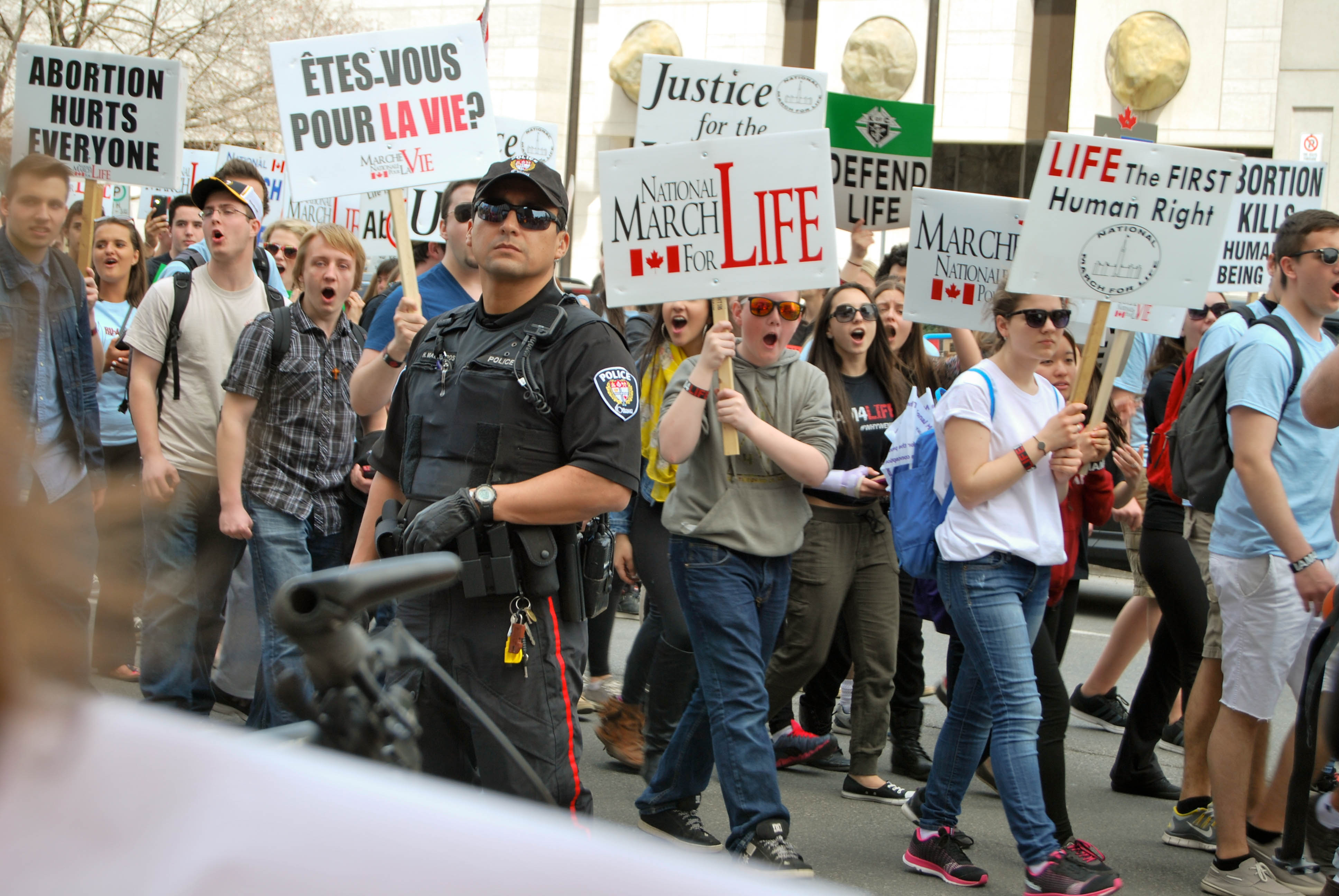 Conservative and Liberal governments alike have historically avoided addressing issues of reproductive rights, particularly abortion. Justin Trudeau changed that in December 2017  by modifying the rules for federal summer jobs funding. Under the new regulations, organizations must include in their applications an attestation that the core mandate of the organization and the main duties of the summer job respect certain established rights, including those found in the Charter of Rights and Freedoms. Groups who do not complete this attestation will not be eligible to receive federal funding for the creation of summer job positions.

The attestation specifically cites “reproductive rights, and the right to be free from discrimination on the basis of […] sexual orientation, or gender identity or expression.” Little controversy has emerged over the presence of an attestation in general. Instead, criticism stems from the specific rights that organizations are asked to attest to, with right-wing groups calling the requirement “an ideology test to support abortion and multiple genders.” Many conservative religious groups have claimed that the attestation of respecting certain rights ironically violates an organization’s right to freedom of belief and expression.

The Trudeau Liberals have been quick to defend their position, arguing that the change in regulations is “about the activities of the organization and the job description”, and “not about beliefs or values.”  The government maintains that their regulation change is constitutional, and that they will “not [roll] back the clock on women’s rights.”

With continued debate on both sides and attempted lawsuits against the federal government, this is an issue that is unlikely to fade away any time soon. The question thus remains: is the government’s change to summer jobs funding rules a step toward protecting fundamental rights, or is it a serious ideological overreach of power?

The Duty to Protect Individual Rights

In liberal democracies, governments have an inherent duty to protect the rights of their citizens. The Liberal Party has historically introduced many of Canada’s hallmark rights-and-freedoms institutions, including the Charter, and policies like official bilingualism. Furthermore, the current government engages in frequent acts of symbolic politics, such as the Prime Minister’s  apology to LGBTQ2A+ Canadians in 2015. Extending the protection of rights to summer jobs funding requirements is not only a strategically smart move in line with Trudeau’s platform; the decision upholds the fundamental rights that should fall under the responsibility of any government, regardless of party. The attestation included in the new applications is therefore a small but important step towards protecting the rights of all Canadians.

The Trudeau administration has made some substantial strides toward gender equality and women’s rights. The historical record of the LPC, however, is far from perfect. While the party is known today for its pro-choice stance on abortion, this has only been in effect for under four years. Prior to 2014, Liberal Members of Parliament were allowed to “vote their conscience” on bills surrounding abortion. This policy resulted in many Liberals, including Liberal Prime Minister Paul Martin, voting against reproductive rights. The 2015 election was the first in which the Liberals required new candidates for the party to be pro-choice. However, anti-abortion incumbents were allowed to run again. While the Liberal party’s contemporary commitment to reproductive rights is admirable, it must not be used to paper over their historical ambivalence on women’s issues.

In light of the historical lack of abortion resources and discrimination against the LGBTQ2A+ community, the Canadian government has a particular responsibility to protect these rights, even at the expense of public backlash. Now, more than ever, the government must work to “prevent youth from being exposed to employment within organizations that may promote positions that are contrary to the values enshrined in the Charter of Rights and Freedoms and associated case law.”

Of course, the argument can be made that individuals can make their own employment decisions regardless of federal funding by choosing not to apply to jobs that don’t align with their individual values. While this might be the case on the surface, government funding delimits the numbers and types of jobs that are available for youth. By providing money for organizations with discriminatory mandates, the government previously risked reducing the number of available opportunities for  marginalized youth. With marginalized individuals already facing challenges in the workforce, it is especially important to eliminate government-imposed barriers to their opportunity for employment.

Moreover, government funding is more than just practical, it also carries symbolic weight. Funding anti-LGBTQ2A+ groups would send a message concerning who is welcome and valued in Canadian society, and who is not. By not funding organizations whose job descriptions or core mandates discriminate against marginalized groups, the Trudeau administration conveys that discrimination will not be a government-endorsed activity (in this instance).

Freedom of Speech and Ideological Overreach

Many religious groups have decried the new policy as an “ideological test” and “coercion on matters of conscience and religious belief,” rather than protection of individual rights. Much of this stems from a misunderstanding of Canadian freedoms and the contents of the new regulation.

The government has not asked prospective summer job employees to agree to being pro-choice, nor has it even asked that the supervisors of the summer jobs hold these values. Instead, it requires that the job description and “core mandate” do not involve discriminatory or anti-abortion activities. A church that wants to fill summer-camp counselor positions will still be able to apply for funding, even if many of the leaders have reservations about abortion. In contrast, a group whose sole purpose is to promote an anti-abortion worldview will no longer be eligible for funding to recruit youth to work for their cause. Ultimately, the vast majority of organizations will still be eligible for summer jobs funding.

What about the groups who are no longer eligible for funding – aren’t their freedoms being infringed upon? Luckily for these organizations, their existence is not being directly threatened. While some groups certainly rely on external funding for their continued existence, summer jobs funding is unlikely to be their main financial source. Furthermore, government funding is not a right. It is a privilege that can be reasonably restricted for various reasons, including ideological incompatibility. The government is banning the existence of anti-abortion or anti-LGBT groups, or preventing these groups from engaging in their usual activities. Organizations can continue to hire, demonstrate, and act as they choose. Under the new regulations, the only thing potentially being withheld is public funds to finance these actions.

Organizations can still host anti-abortion demonstrations. They can still provide misleading anti-abortion “education” to vulnerable pregnant women. The new regulations simply make it harder to acquire taxpayer money to do these things. Nothing in the regulation change stops these groups from financing their own activities or receiving funding from political parties and interest groups. Canadians do have a right to freedom of speech. Organizations do not, however, have a right to access public funds to finance their speech. As such, the new regulations work to protect Canadians’ rights without restricting freedom of speech.

A Lack of Clarity

While some controversy would undoubtedly have emerged from any policy that touches on a hot-button issue like abortion, much of the outrage could have been avoided through clearer policy articulation on the part of the Liberals.

The attestation applies to an organization’s “core mandate.” The government argues that this means that religious organizations with pro-life leanings can still apply. The use of “core mandate,” however, is rather vague, generating understandable confusion. As argued in an editorial by the Toronto Star, the attestation “should limit the conditions to what the jobs would actually involve”, rather than asking organizations to “sign on to a broadly worded values statement.”

Although the government demands that a group’s core mandate respect the right to choose, it maintains that religious groups will still be eligible for funding. This inevitably generates confusion as to the exact extent to which organizations can hold anti-abortion views. Some religious groups are justifiably concerned about the implications of checking what they see as a “pro-choice box” when they have reservations about abortion. Clearly restricting the attestation to the demands of the specific summer job would have clarified the application process and eligibility for organizations, thus reducing the confusion and ensuing criticism against the government.

The government has a duty to protect citizen rights. It also has a responsibility to clearly articulate any steps toward this goal. More careful deliberation and delimiting of the summer jobs regulations would have done the Liberals well. Nonetheless, the change in summer jobs funding is an important step towards a world in which the rights of all Canadians are respected.