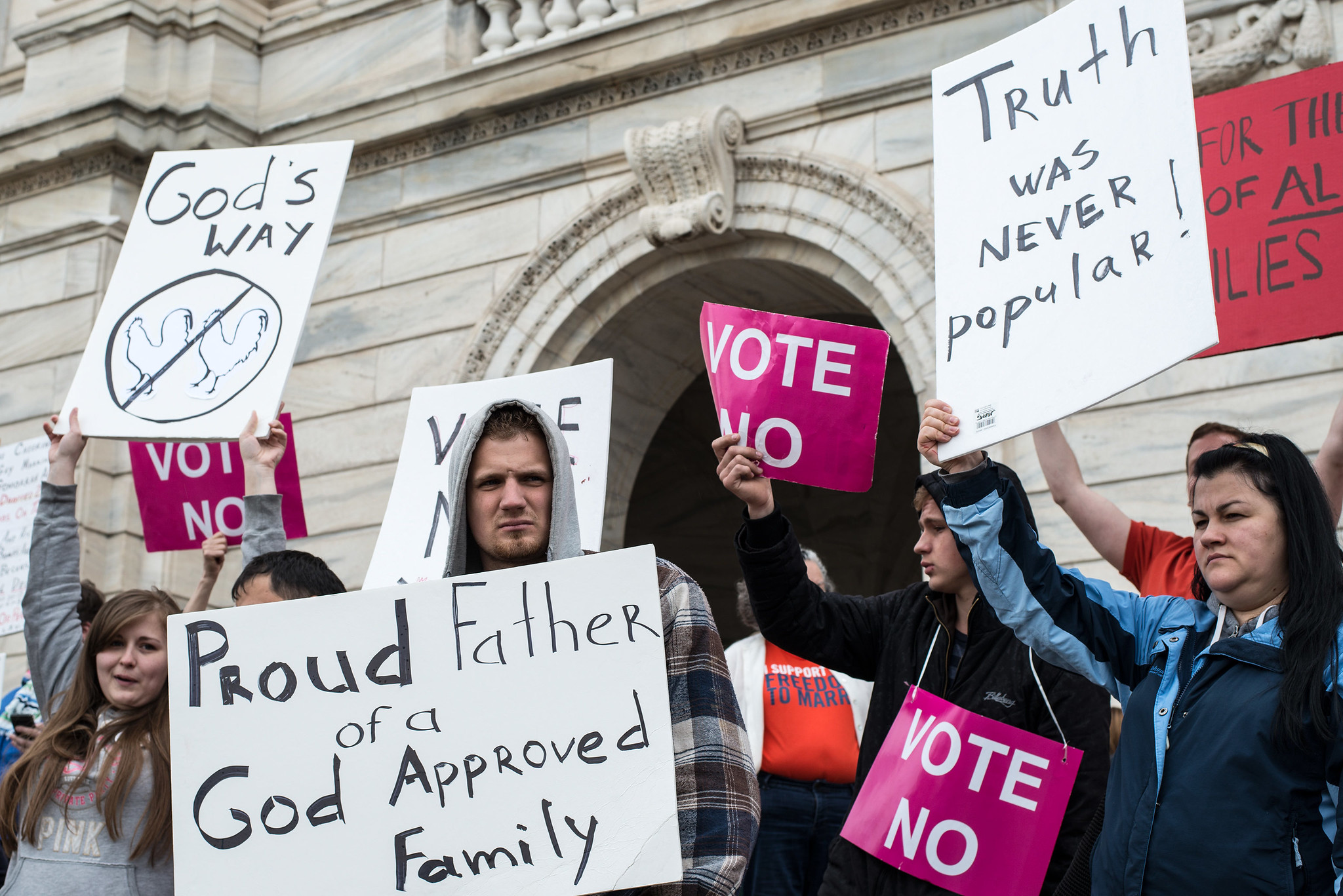 For the past three centuries, the principles of Christian dogma have hampered the secular processes of Western democratic policymaking. From the French revolution to the modern state of the Vatican, Christian dogma (considered Christian principles of civil ordinance based on the bible) and secular governance have continuously competed over legal control. However, following the end of the 20th century, Christian dogma has become less influential toward Western policymaking. Instead, a more secular-humanist approach toward policy has spread consistently throughout the West.

The legalisation of gay marriage represents one of the most revolutionary examples of the West undermining Christian dogma. Within the biblical text of Leviticus, homosexual relationships of any kind are explicitly regarded as an abomination. However, to date, gay marriage has been legalized in a total of 28 countries globally – 25 in the democratic West (Europe, Commonwealth and USA). This ideological shift beginning in Spain, which legalized homosexual marriage in 2005, has sparked a flood of 21st century Western legislation distancing itself from Christian dogma. Yet, within this tide of Western legal secularization, the United States continues to enact laws that uphold Christian dogma. Despite the proliferation of legal secularization in the West, recent abortion legislation demonstrates a return to the United States’ historic utilization of Christian dogma in policy.

The separation of church and state has, at least in theory, been propagated as a cornerstone of American democracy. John Dickinson, a founding father of the United States stated that “Religion and Government are certainly very different Things, instituted for different Ends; the design of one being to promote our temporal Happiness; the design of the other to procure the Favour of God, and thereby the Salvation of our Souls.” As different as these two spheres were imagined during the foundation of the United States, the legal framework of the present day United States demonstrates a fundamental conglomeration of the two realities. As a result of the US’ institutionalization of legal plurality, only certain states have enacted laws indicative of Christian dogma. Although these states do not resemble the nation entirely, they represent an American ideological trend opposing human rights in favour of religious convictions.

According to the Catechism of the Catholic church section 2271, abortion of any kind or circumstance is considered a moral evil. Within the US population, 67 percent of evangelical citizens polled in 2017 believed abortion to be unjustifiable under any circumstances, while 78 percent of secular citizens believe abortion to be justifiable under all circumstances. American senate candidate and former treasurer of Indiana Richard Mourdock in 2012 stated “Women shouldn’t terminate pregnancies resulting from rape because it’s what God intended.” Although restrictions regarding abortion have not passed in Indiana, dogmatic influences upon American policy have proliferated in a series of states forwarding the same sentiment propagated by Mourdock seven years ago.

Currently, the United State’s federal legal structure allows for abortion without restriction. This places the US alongside 61 other nations, or 39 percent of the world’s population. Just over half of the nations within this list are considered to be representative of the democratic West. However, following recent political activity, the US seems to be regressing with respect to the amounts of freedom given to women regarding access to abortions. Ohio, Alabama, Georgia, Louisiana and Missouri over the past week have all passed laws which prohibit abortion to varying degrees. Within Ohio and Georgia, “heartbeat bills” have been passed. These laws state that abortion is only legal until a fetus’ heartbeat can be detected. This law would therefore give women a maximum time frame of only 6 weeks to receive an abortion. This process forces women to make a choice that affects their entire future within a course of weeks. Additionally, it entirely strips the choice from women who do not learn of their pregnancy early enough.

Alabama has passed the harshest piece of legislation regarding abortion prohibition within the US. The roots of religious fundamentalism run deep within Alabama as 90 percent of the state professes a belief in God, with 86 percent of the state identifying as Christian. On May 14th Alabama’s governor Kay Ivey passed into law the “Alabama Human Life Protection Act”. This piece of legislation prohibits abortion under all circumstances as long as the pregnancy does not cause serious health problems for the mother. Even in cases of sexual assault and incest, abortion remains prohibited. The punishment for abortion is categorized within the act as a class A felony. Therefore, both the doctor and the individual consenting to an abortion would face up to 99 years in prison if found guilty. Within the state of Alabama, sexual assault and incest are assigned a class C felony distinction, meaning a maximum prison sentence of ten years.

Following his election as President, Donald Trump pledged to overturn a landmark Supreme Court case which established a precedent regarding the constitutional protection of a woman’s right to an abortion. In the 1973 Roe v. Wade case, a 7-2 Supreme Court decision established a woman’s right to abortion under the 14th amendment’s right to privacy clause. Trump pledged to appoint conservative Supreme Court justices to overturn the precedent set by Roe v. Wade. Therefore, if any of the five state judiciaries mentioned above were to delegate the jurisdiction regarding abortion to the federal level, Roe V. Wade could be overturned nationally. If this initial law were to be overturned, an explicit law motivated and upheld by Christian dogma would be enacted.

As might be expected, abortion is not the only instance of the United States institutionalizing dogmatic law. While the US’s potential nationwide prohibition of abortion undermines the freedom a women has over her body, US state laws regarding capital punishment squander yet another human rights item in favor of religious principles. Within the Bible, capital punishment is cited under the retributive principle of an eye for an eye, in which murderers are murdered, those who steal have their limbs cut off, and those who cheat are also murdered. In 2017 the United States’ Judicial system represented the seventh most murderous country on the globe behind Somalia, Egypt, Pakistan, Iraq, Saudi Arabia, Iran and China. Thirty out of the US’s fifty states uphold capital punishment, while no other Western democratic nation performs judicial killings. The US fundamentally contrasts the entire democratic West in its institutionalization of the retributive forms of justice used within the bible.

The United States’ wave of anti-abortion rhetoric alongside their consistent use of capital punishment demonstrates a pattern of legal principles influenced by Christian dogma. The implications that these religious doctrines have toward the liberties for which the United States were founded demonstrates a new era of American policymaking. Today, apparently, the statements of a book written thousands of years ago take precedence over a woman’s freedom.