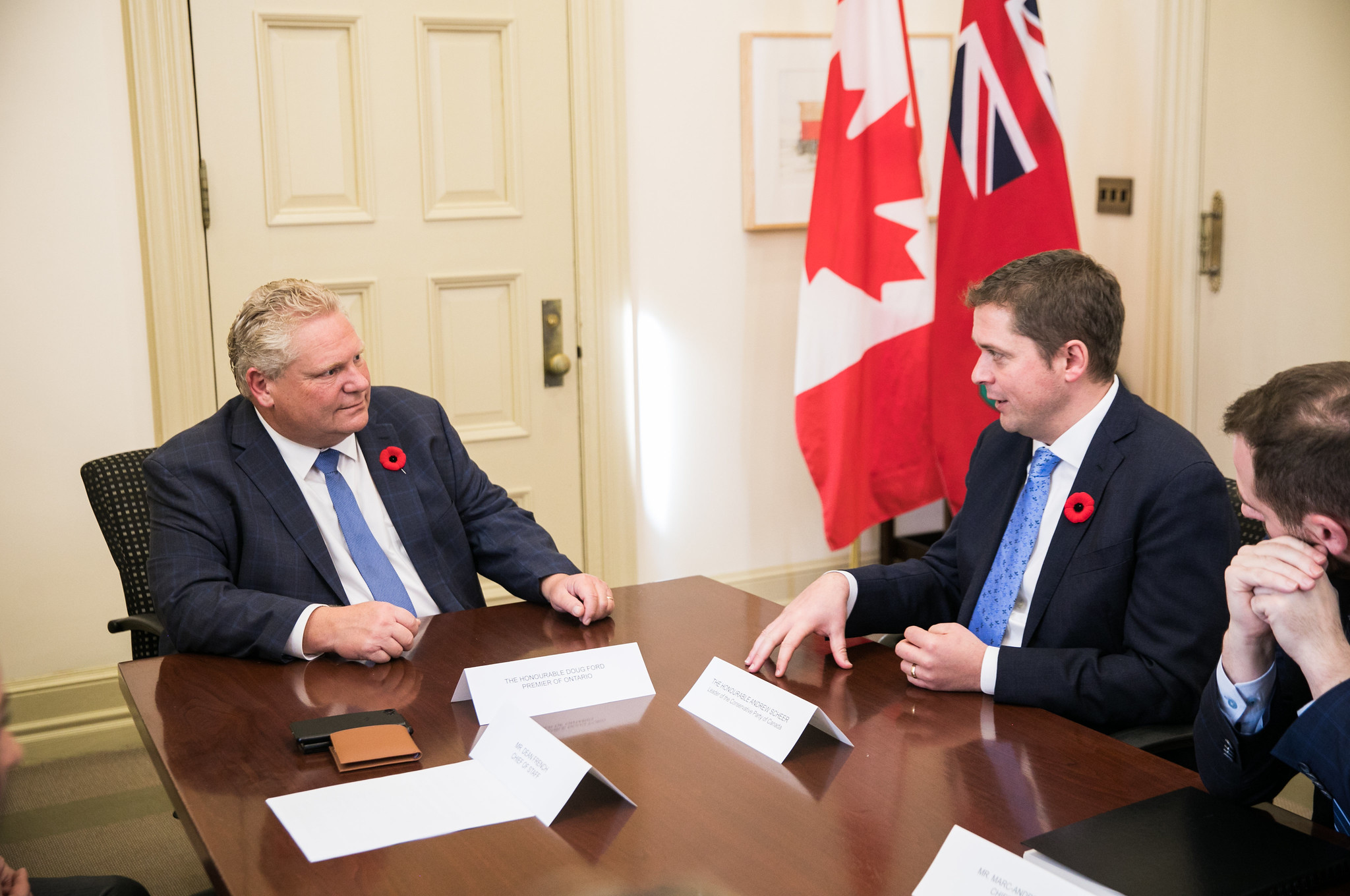 Andrew Scheer has a problem, and it’s not Justin Trudeau. A recent poll by Corbett Communications states that 60 per cent of Ontario voters reported being less likely to support Scheer’s Conservatives due to the policies of Doug Ford’s Progressive Conservatives. With Ford’s unpopularity swelling, and with less than two months until the election, perhaps the federal Conservatives have reason to worry.

Ford as a Liability

Following the release of the 2019 Ontario budget, which included numerous cuts to the health care, education, and social services spending, the Ford government has received extensive backlash and been faced with a barrage of weak polling numbers. With this in mind, Scheer’s strategists are worried that Ford’s inability to stay out of the headlines – in contrast to the lower profile of the federal leader – will cost him.

CPC candidates have also expressed complaints that Ford’s policies have been causing them grief at the doors. The Corbett poll, Ford’s Policy Impact, even reported 21 per cent of Conservative voters saying they were less likely to vote for Scheer in October on account of Ford’s policies.

With the Ontario legislature adjourned until October 28 – one week after the federal election – Scheer’s campaign team had hoped this break would keep the premier out of the daily media cycle. Despite speculation, however, Ford officials state they did not extend their summer break to help the federal Conservatives.

In actuality, the break has not seemed to keep Mr. Ford out of the news cycle. For instance, the Premier’s recently doubling-down on controversial comments made last month about the mentally ill has received extensive coverage.

The Key for Success: Winning over Ontario

With roughly three years to turn public opinion around before his next election, decreasing popularity does not affect Ford to the same extent that it affects Scheer. But with federal Conservatives struggling to make inroads in Ontario, Doug Ford may be to blame nonetheless. Both Liberal and Conservative MPs in Ontario, for instance, have discussed how their constituents are voicing complaints about the Ford government and its cuts.

Seat-rich Ontario is also shaping up to be a battleground province, and is likely to be decisive in October’s final results. Additionally, support lost by the Liberals in Ontario has shifted towards the Greens and the NDP, rather than the Conservatives. With Ontario being instrumental to Scheer’s national success, Scheer is understandably anxious to be connected to some of Ford’s more controversial moves.

To improve his standing in Ontario, perhaps Scheer will have to establish his own identity. In the country’s most populous province, he must disassociate himself from one of its most polarizing premiers – while also forging his own path – should he hope to make gains this fall.

During the Toronto Raptors’ championship series, an ad portrayed Andrew Scheer as a puppet of Ontario Premier Doug Ford, bringing attention to the concerns of many voters. Trudeau’s team additionally has been using Ford to vilify Scheer, with cabinet ministers routinely attacking Scheer as cast in the image of Ford.

Whether these criticisms are fair is up for debate. What is certain, however, is that they are effective. Evidently, Scheer is striving to counter the impression that he would govern in a similar nature to the Premier, insisting he is his “own man.” Scheer has been working to present himself as moderate in an attempt to distinguish himself from his more hardline provincial counterparts. For example, Scheer said his party would not rush to balance the federal budget, but instead, aim to cut the deficit in five years – contrary to the sting of Ford’s provincial cuts.

Though it may be in Scheer’s best interest to separate himself from the unpopular Ford brand, he has yet to do so entirely. The CPC leader has emphasized that he and Ford are on the same page on a number of issues, such as opposing the carbon tax and increasing affordability for Canadians. Through the Ontario PCs and the federal Conservatives are distinct entities, there is still much overlap in policies, ideology, membership, and voters. Whether this will help or hurt Scheer will have to be seen on election day.