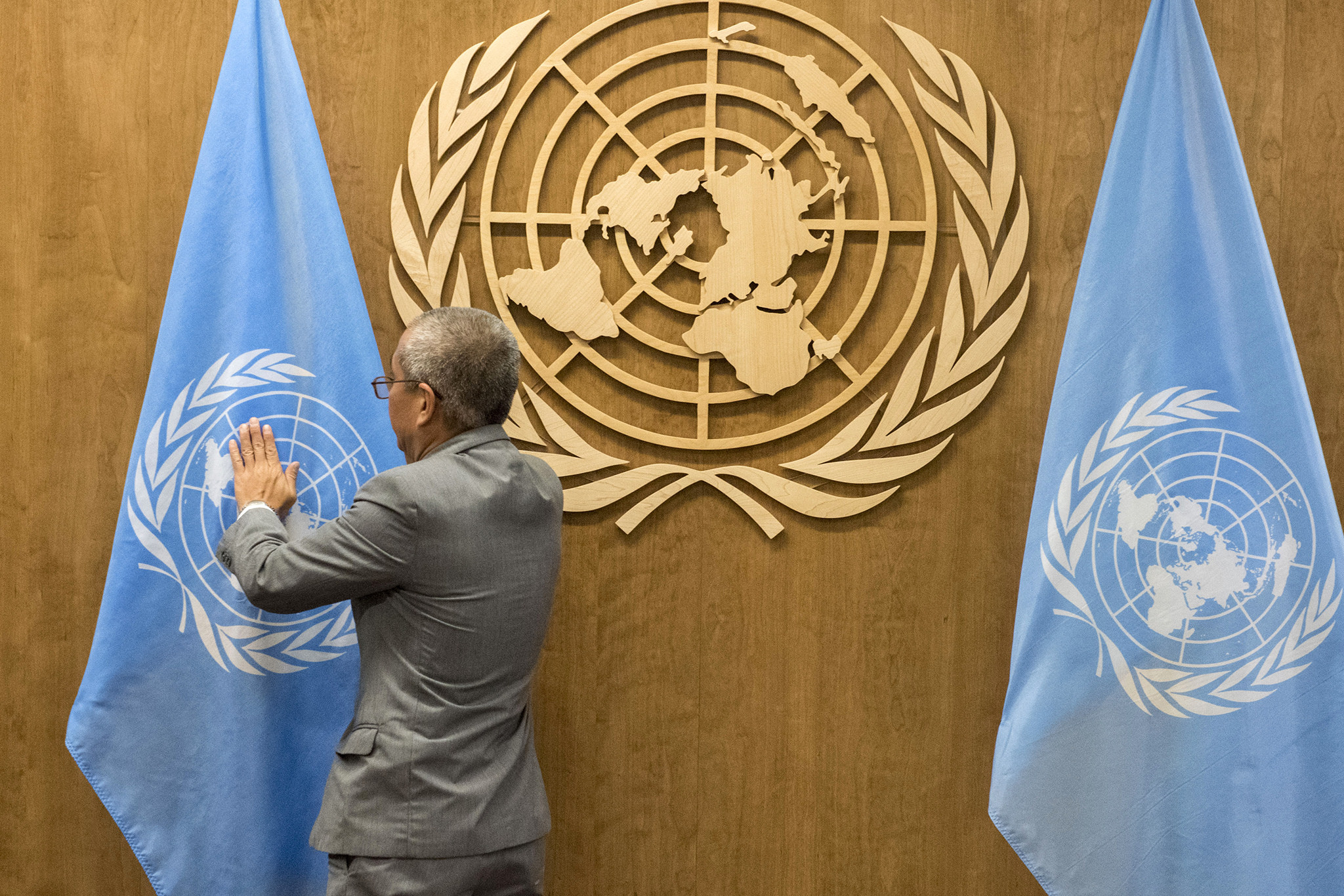 Before Trump officially assumed office, foreign policy pundits were deeply divided. Half believed that Pax Americana was history, and so was the global liberal order. The other half deemed the liberal order resilient, and argued that the stories of its demise were greatly exaggerated.

About a year and a half into Trump’s term, it is safe to say that the liberal order as we know it has eroded considerably. Two things stand out here. First, although it will not be entirely liberal, some form of global order will survive. Secondly, Trump did not cause the erosion of the liberal order, he just helped exacerbate that process.

In a Hobbesian world, there is no leviathan to assume authority at the international level. Unlike domestic governance, global governance is all about overcoming the challenges of collective action and coordinating on matters of transnational importance.

History of an Idea: Liberal Order

In the immediate post-war era, the term “liberal order” was only a Western idea. A group of similar liberal democracies, led by the US, established a set of multilateral institutions. The power within those institutions was distributed only among these states, with the lion’s share reserved for the US. These institutions in turn were used to provide global public goods such as freedom of seas and free trade facilitation. Additionally, the US became the lender of last resort and deployed military forces abroad –  underpinning the new global economic and security order. Institutions such as IMF, GATT, NATO and the UN were the basis for the new liberal– rules based order.

It is important to mark three distinct features of this initial post-war order. First, the  idea of liberal democracy was the heart of this new order and shared amongst the members, all like-minded democracies. Secondly, a globalized, interdependent world was explicitly linked to achieving favourable domestic economic outcomes in each of the transatlantic states. This new order was neither universal nor entirely liberal. Large nation-states such as India, China and the Soviet Union were explicitly left out. And the US often used illiberal means to contain adversaries.

Finally, with the end of the Cold War and rise of several other emerging markets, the post-war order was expanded. The liberal order became more universal with the introduction of states such as India, China, and the ASEAN states. Consequently, the rules-based order became more flexible to allow greater multilateral participation.

The Road to Current Crisis

Since then, a myriad of issues have contributed to the erosion of the liberal order. The most significant was the 2007 financial crisis and its aftermath. The blow to the global economy led to the rise of populist politics across the transatlantic region. This core linkage of democracy and free-markets, which underpinned the global order, was destroyed.

Second, the past few decades have seen the rise of several emerging powers. For a long time now there have been calls for reforming the power-sharing structure within institutions of global governance. The resistance  to reform continues to diminish the legitimacy of these institutions.

Third, while the institutions of global governance continued to exist, multilateralism was coming to an end. The past two decades have seen the rise of several regional powers such as Brazil, China, India, and Indonesia. Additionally, a range of multinational corporations, non-governmental organizations, and civic associations has gained substantial global influence. Given these developments, a plethora of regional, smaller, less ambitious, and more ad-hoc institutions proliferated across the globe. The forum for negotiation has moved from large transatlantic institutions to these smaller, more flexible ones. While their mandates are less ambitious, they have succeeded in facilitating some basic interstate cooperation.

Fourth, the rise of Trump in the US significantly damaged the very liberal order America created seven decades ago. He has either pulled out of long serving global institutions such as UNESCO, UN Human Rights Council, and UNRWA, or worse, severely undermined the credibility of vital institutions such as NATO and WTO.

In the case of the WTO, the application of tariffs using the national security clause has brought the world economy on the brink of a trade war. This clause is a tool of last resort, and there had been a long-held precedent of not using it. In reaction, the retaliatory tariffs by the EU and China completely by-passed the WTO dispute resolution process, undermining the role of WTO as the regulator of global trade.

The ramifications of undermining NATO have even graver consequences. Even during the heyday of the Cold War, the idea that the US would come to the defence of Europe in case of Soviet aggression was a hard sell. By actively undermining that security alliance, deterrence credibility with respect to Russia was thrown out of the window.Moreover, it is unreasonable to expect that the US will come to the rescue should any of America’s European allies face conflict.

Effectively, with these developments, global free trade and a stable security environment in Europe have become fundamentally unstable.

Lastly, the rise of illiberal states is a constant threat to the existing liberal order. While Russia does not have the  resources to form an alternative global order, it has used every possible opportunity to undermine the existing one. On the other hand, China is trying to challenge the liberal order by its set of alternative institutions such as AIIB and the Belt and Road Initiative.

Future of the Liberal Order

There has been a contrasting set of reactions to these developments of the international system. One set of scholars, such as Joseph Nye and John Ikenberry, argue that the liberal order is more resilient than most of us think. Ikenberry rests his argument on the idea that democracy is what underpins the liberal order. And if democracy has survived for more than three centuries, so will the liberal order. However, he does  admit that liberal internationalism has lost its connection with economic and social advancement within western countries and believes that western states need to adopt more social democratic models to fix that.

On the other side, scholars such as Amitav Acharya believe that the hegemony of the liberal order is coming to an end. He argues that we will have a ‘multiplex world’ where liberal internationalism would just be one of the competing ideologies.

In this period of unprecedented flux, it is important to distinguish between matters of speculation, credibility, and the more substantive aspects of the liberal order.

In that regard, the credibility of the US as the guarantor of the liberal order is under severe  threat. But there has not been a major shift in core American policies. The US continues to maintain forward military positions from Western Pacific to the testy waters of Gulf of Hormuz. Further, the American economy continues to be at the heart of the global economy.

A less-discussed  aspect of the liberal order is the behavioural change it has facilitated even among non-liberal states. Today, even states such as China are deeply invested in the global economy, and global institutions such as UNSC, WTO, IMF, and UN Peacekeeping. National interests of the Chinese state have evolved through  its participation in the liberal order. While some aspects of its new global institutions seek to overturn American interests, there will be major overlapping interests with the US. Therefore, it remains an open question, whether the new Chinese institutional setup completely undermines the existing liberal one.

Speculation regarding China underwriting a new global have picked up over the last few years. It needs to be acknowledged that China is presently funding a multitude of developmental projects across the world. Additionally, emerging Chinese naval aggression in the South China Sea is undermining the rules of free navigation. While it can be argued that the Asian order under China is rapidly changing, China neither has the economic means nor the tools of power projection to underwrite the global order just yet.

Putting all the pieces together, an ambiguous picture of the liberal order emerges. While America continues to abdicate its leadership role as a superpower, China is still not ready to completely supplant the American-led global order. Some of the key international institutions have been weakened. But a range of new institutions are emerging and providing a limited but insufficient supply of global governance. Given these trends, the global order will continue to get more fragmented and less multilateral. Unless the western world undergoes a political and economic transformation, the future of global order as a liberal one remains uncertain.