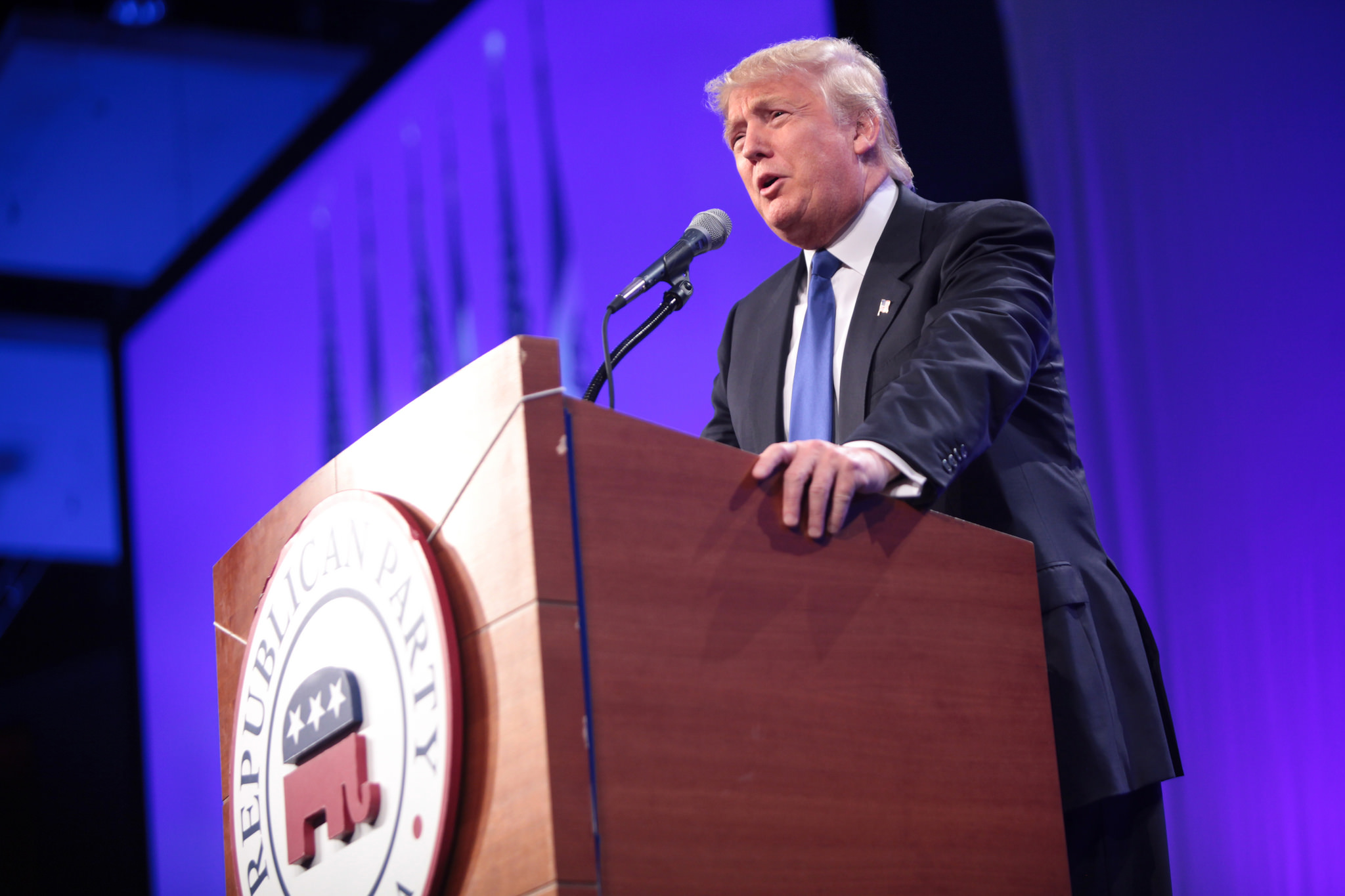 The Republican Party is no longer the party of Lincoln and Eisenhower. Nor are its congressional seats filled by liberal Rockefeller Republicans.The GOP has become the party of Donald Trump, and nobody else. Historians and lifelong Republicans alike wonder the same thing: How did this happen?

Donald Trump’s rise in the Republican Party was made possible by a long term rightward shift that has culminated in the alt-right’s ascendance in the modern GOP. By spurning governmental assistance policies, resisting regulation, and adopting exclusionary immigration policies, the GOP moves closer and closer to the far right, and arguably risks reinforcing it.

It Wasn’t Always This Way

Despite the party’s rightward lurch in recent decades, the GOP has its roots in progressive abolitionism. After the civil war, the “Radical Republican Congress” was responsible for the abolition of slavery and the passage of civil rights bills designed to protect black civil rights (over the objections of Democrats). In the 20th century, although much of the party opposed the New Deal, a prominent faction of liberal and moderate Republicans supported a collection of policies that would place them firmly in the Democratic Party should they run for office today.

These Republicans were known as “Rockefeller Republicans,” with former Governor and Vice President Nelson Rockefeller a prominent leader of the faction. These Republicans (along with Republican moderates) joined hands with liberal Northern Democrats to pass the landmark civil rights legislation of the 1960’s.  Furthermore, a prominent minority supported President Lyndon Johnson’s Great Society agenda, a cascade of anti-poverty policies that included Medicare, Medicaid, and public housing programs.

The GOP’s moderates and liberals survived well into the 1970’s. Because Republican President Richard Nixon is remembered more for corruption than his actual agenda, many Americans are unaware of the infamous President’s credentials as a moderate Republican. In fact, many of Nixon’s policies were so moderate, they would make him a Democrat today. Unlike the contemporary party, Nixon firmly supported environmental protection and regulation, signing the bill that created the Environmental Protection Agency.

In addition, Nixon’s proposal for healthcare reform, a traditional Democratic priority, involved government intervention in the private insurance market, subsidies, and a massive expansion of Medicaid to achieve greatly expanded healthcare access. In fact, Nixon’s healthcare plan is widely regarded as more “liberal” than President Obama’s Affordable Care Act because it would have used taxpayer dollars to cover more people. Finally, although Nixon ultimately vetoed a bill passed by Congress to establish a multi-billion dollar universal child care program for working women, he was convinced to do so by his administration’s conservative faction; the White House had helped write the bill and Nixon considered signing it.

The question naturally arises: how did the Republican Party shift from the party of Presidents who believed in environmental protection and considered sweeping child care entitlements to the party of Trump? With a political realignment catalyzed by the unabashedly liberal agenda of the Johnson Democrats, the Republican Party began actively courting conservative Southern Democrats who opposed civil rights legislation and sought to preserve Jim Crow.

Dubbed the “Southern Strategy,” Nixon and his allies quietly welcomed former Democrats into the Republican Party in an effort to end Democratic dominance in the South and fracture the New Deal Coalition that had won Democrats the White House in several successive elections. While effective in its aims, this strategy ultimately moved the party significantly to the right, pushing out moderates and liberals like Nixon and Rockefeller.

Furthermore, the 1980’s ushered in the age of the “Moral Majority,” a hardline conservative political movement seeking to restore family values and religion as the centre point of American life. Comprised of highly religious evangelical Christians, the movement quickly came to dominate the GOP and brought millions of anti-abortion voters into the party. Their alliance with the Republicans helped propel Ronald Reagan and every subsequent Republican President to the White House. In addition to cementing the GOP as a firmly anti-abortion party, this development also hastened the GOP’s move to the right on welfare, economic regulation, and taxes.

Agreeing with traditional fiscal conservatives and neoliberals, the GOP Evangelicals blamed the welfare state for what they considered to be the erosion of family values and the traditional family-centric social safety net. They believe that welfare and other government assistance encouraged the birth of children out of wedlock and brought the demise of the traditional family unit. For these reasons, it is not surprising that Republicans of the 1980’s began to warn of lazy African American “welfare queens” supposedly living grand lives on the taxpayer dole.

Fast forward to the current era, the Republican evolution is complete – the party zealously and aggressively oppose taxation and anti-poverty spending at every turn. During the previous Congress, Republicans let funding for the Children’s Health Insurance Program (CHIP) lapse for several months despite dire warnings from states that their emergency funds were running dry. Created in 1997 by Democrat Ted Kennedy and Republican Orrin Hatch, the program provides healthcare to poor children with incomes too high to qualify for Medicaid.

However, if proposed today, CHIP would most likely garner very little Republican support. Many denounced the program as a new left-wing “entitlement” in the 1990’s. Perhaps that is why Orrin Hatch himself declined to prioritize CHIP funding while debating the 2017 Republican tax cuts.

The Republican policy shift can also be seen in the present day debate over healthcare reform. President Obama won the Presidency with a promise to create a universal healthcare system. Upon entering office, Obama proposed something unusual: Romneycare. Mitt Romney, who would later run against Obama in 2012, worked with the Democratic legislature in Massachusetts to pass a healthcare overhaul that subsidized and regulated private insurance companies, sending the the state’s uninsured rate plummeting.

President Obama took Governor Romney’s law, modified it, and proposed it to Congress, anticipating Republican support. He was wrong. Republicans balked en masse, and even the most moderate Republicans in the Senate, Susan Collins and Olympia Snowe, refused to endorse Obamacare. Even in retrospect, Obama had a good reason to expect Republican cooperation: significant parts of his law were taken from a proposal from the Heritage Foundation, a leading conservative think tank with significant influence in the Republican party.

The group had launched the proposal as a free market alternative to Bill Clinton’s regulation-heavy healthcare reform proposal that ultimately failed in the 1994. However, despite the proposal’s previous support from prominent Republicans like Orrin Hatch, the party had moved even further from the center since 1994, and Obama was forced to pass a conservative healthcare bill without a single Republican vote.

Coming off a historic midterm election loss, the Republican Party will need to reevaluate its ideology. Much of the exodus of moderate suburbanites in 2018 was due to their belief that the party had shifted too far to the right for their tastes. Elected officials are taking notice: In deep red Kansas, three Republican legislators have switched their party affiliation to Democratic, citing Donald Trump as well as polarizing Kansas figures like Chris Kobach and Sam Brownback. While Kobach led an unfounded crusade against voter fraud, Governor Brownback passed tax cuts that bankrupted the state and drained its education system.

Although right wing politics may have worked for the party in the past, the GOP may be inclined to reverse its rightward drift unless it wishes to be permanently known as the Party of Trump.