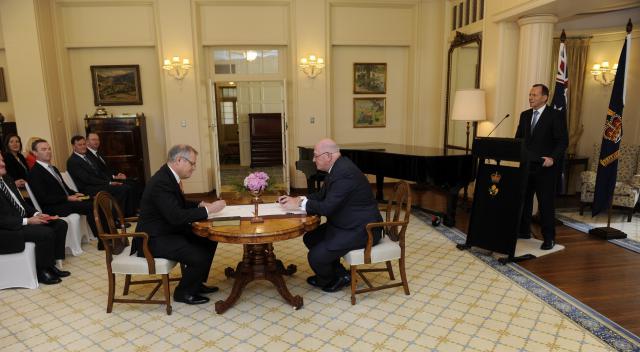 “I’ve always believed in miracles, mate” were the first words uttered to a reporter by re-elected Prime Minister Scott Morrison when it became clear the centre-right Liberal-National Coalition would be returned to government.

Indeed, no opinion poll taken since the last federal election in July 2016 had shown the Coalition to be in a winning position. The Opposition Leader, Labor’s Bill Shorten, expected to win this election as a vindication of both Labor’s intra-party discipline and its comprehensive social-democratic policy agenda. The public expected him to win as well, but it is now clear that the majority did not want him to win. What appeared to Morrison as a miraculous outcome was, in fact, the result of pervasive preference falsification that misrepresented the priorities of the Australian people.

Disunity Isn’t Death After All

When the Coalition changed leaders last August from Malcolm Turnbull to Morrison, it reached its lowest two-party preferred voting intention at 56-44, Labor leading. The last poll before the election showed a 51-49 split, with Labor expected to form the government. Such a divergence from the election result, with the Coalition expected to gain two seats for a three seat majority in the 151 member House of Representatives, suggests the polling was inaccurate or that respondents weren’t telling the truth. The Coalition expected voter retribution for changing leaders twice while in government, continuing the revolving door prime-ministership of six leaders in ten years. Consequently, it ran a small-target campaign, running on a “business-as-usual” platform that shifted focus to Labor.

This could have been a misstep for the Coalition, with Labor convincingly assuming the high ground on a number of issues. Stability is a strength for Labor, Shorten having led the party in opposition for six years. It also has a more comprehensive approach to climate change, pledging to reduce emissions by 45 percent on 2005 levels by 2030. The main source of Coalition instability has been disagreement on climate policy, with the conservative wing of the party populated by denialists or those wishing to do nothing. Turnbull, a moderate, was removed partially in response to his effort to increase investment in renewable energy sources. Labor was punished at the ballot-box in 2013 for its expedience, changing leaders twice over its six-year period in government. Yet it may be that Australians are now so accustomed to leadership change that it is no longer such an egregious act.

Drought conditions in the outback continued in 2018 and intensified as a result of climate change. Dried out inland rivers caused widespread “fish kills,” pastoralists were forced to kill their livestock or watch them die slowly due to lack of feed and water, and dry topsoil caused more frequent dust storms. The following summer was marred by scheduled power-outages across major cities, as energy supply failed to meet the burgeoning demand for power to cool homes. In the effort to fulfil emissions-reduction targets, some older coal-fired power stations have been closed, yet the reliable supply they provided has not yet been replaced by renewables. This is a result of Coalition malaise on the issue. Coupled with retail power price increases that have outstripped wages growth, it is evident that the economic cost of acting on climate change still trumps the moral imperative in many voters minds, whether they will admit it publicly or not.

Coincidentally, Abbott made his comment in his concession speech, having lost his “blue ribbon” seat to a centrist-independent who ran on climate action amongst a suite of progressive positions. The loss is indicative of a broader ideological and demographic shift in voting patterns. As voters in inner-city electorates, including Abbott’s former seat, have become increasingly wealthy and progressive, the social conservatism of the Coalition has made these once-safe seats marginal. Wentworth, Turnbull’s former electorate and the wealthiest in the country, was taken by another centrist-independent in a by-election after his resignation. The current Liberal candidate standing for the seat saw it necessary to brand himself in election material as “a modern Liberal,” distancing himself from the party’s conservative wing and won the seat back by a very slender margin.

However, the outer-suburbs told a different story. Labor expected seats on the outskirts of Sydney, Melbourne, and Brisbane – supposedly “working class” territory – to fall their way uniformly. They did not. Building on the popularity of the state Labor government in post-industrial Victoria, Labor expected to strengthen their position and swing safe Liberal seats such as Kooyong, the state’s wealthiest electorate. In the end, the only gains made there were two seats with sitting Liberals that had been made nominally Labor leaning after boundary adjustments. Morrison campaigned extensively in structurally conservative Queensland, reclaiming one suburban and one regional seat from Labor. Add two seats that swung to the Coalition in forestry-dependent Tasmania, with no net change in the other states, and the Coalition’s “very narrow” path to victory was realized.

Labor ran an avowedly redistributive campaign, pledging changes to the taxation system to close loopholes that currently favour property-owners and retirees over young people and wage-earners. The Coalition demonized Labor’s plan as a “Retiree Tax,” and warned that Labor’s policies would lead to a dramatic fall in real estate values. Labor calculated that these policies would play well amongst young people and the middle class, who populate outer-suburban electorates and face prohibitive housing unaffordability. Dwelling prices relative to annual income in Sydney and Melbourne, where over a third of Australians live, are closest to Vancouver and San Jose, CA respectively.

Yet the Coalition regained the seat of Lindsay in outer-suburban Sydney with a swing of more than six percent. This traditionally working-class electorate has been marginal for more than a decade, but Labor’s characterization of the Coalition as the party of big business and vested interests failed to resonate there. This is indicative of further demographic change in Australia’s major cities. Many low-income earners and unionized workers have been priced out of the housing market, their place taken by small business owners and university-educated professionals. These voters are more receptive to the Coalition’s planned income tax cuts, and perceived economic responsibility in protecting Australia’s uninterrupted 27 years of growth, and less so to Labor’s social agenda.

Notable too is Scott Morrison’s personal popularity. Throughout his tenure, the PM has maintained a consistent lead over Bill Shorten in ‘preferred Prime Minister’ polling, and has cultivated a ‘suburban dad’ image: church-going and football-loving. Contrasted to Shorten, a former trade union leader who relied heavily on his front bench talent to present leadership capacity, Morrison’s connection with the increasingly diverse Australian populace is anomalous in its traditionalism. The Labor front bench consists of more women and non-white Australians than the Coalition’s, and the right has been plagued by a perception of its being racist and sexist. Yet again these concerns did not translate into vote-winning issues for Labor. The Coalition carried urban electorates with sizable majorities of Asian-Australians, the largest ethnic minority group.

Australia’s first evangelical-Christian PM may see his most unlikely win as miraculous, but it is a result of a misguided Labor campaign. Australians may signal publicly that action on climate change, and more compassionate treatment of refugees and indigenous people, is important to them. Yet privately, they have voted in their economic self-interest. In this respect, Labor failed to recognize that middle-Australia would still prefer its taxes lower than social spending higher. Since the 1980s, Labor has only ever been elected on a ‘third way’ platform. To win in future, Labor needs to find out what that ‘way’ is in today’s Australia, and beat the Coalition at their own game.