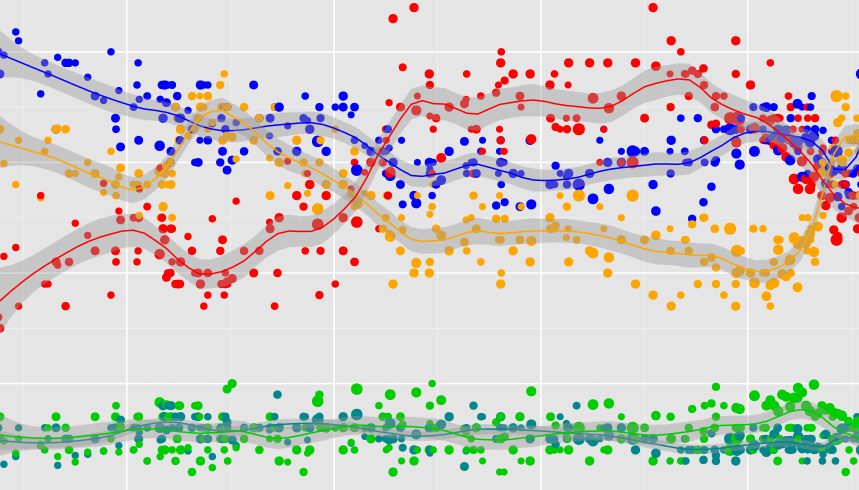 When Philippe J. Fournier took his first political science course, he was so bewildered by the professor’s rambling that he didn’t realize the class had begun. Today, Fournier is Canada’s most up-and-coming political polling analyst, with projections regularly featured in L’actualité and Maclean’s.

When we sat down with Fournier at a cafe near McGill, it became immediately apparent that he was not a typical political analyst. In fact, he was quick to tell us that he isn’t a political analyst at all, and that what he provides are “numbers, and impressions based on numbers.”

This emphasis on numbers makes a lot of sense when you look at Fournier’s past⁠—and present. By day, he teaches astrophysics at Cégep de Saint-Laurent in Montreal. Although you would never guess it from his success, political projection is only his side hustle.

He got his start at McGill, where he studied physics (and almost gave up – but more on that later). At the end of his undergraduate degree and throughout his graduate studies in astrophysics at Laval University, Fournier used math and computer science to analyze data from telescopes. He eventually started playing around with game simulations, predicting the outcomes of hypothetical poker and blackjack games. Once he became a teacher, he used physics simulations to keep his students engaged in the classroom.

Over time, Fournier became skilled at computer simulations. “Compared to a real programmer, I know nothing,” he told us, “but compared to the average person, I’m a really good programmer.” Eventually, he decided to use his computer skills to explore his personal curiosities with politics, first setting out to see how different voting systems would impact the outcomes of elections.

The rest is history.

Using hypothetical data points, Fournier began creating simulations for different types of voting systems, including proportional representation and first past the post. “It was like playing a video game,” he explained enthusiastically.

After getting interesting results in his hypothetical simulations, Fournier decided to use real data. Taking historical data from Quebec, he worked on creating a model that accurately projected the results of the 2014 provincial election.

Building that initial model didn’t come easily. On several occasions, Fournier would work late into the night, adjusting the model until his wife woke up for the day and he realized it was morning.

Those sleepless nights led to the creation of an incredibly accurate electoral model, which has correctly predicted the winner of over 90 percent of seats in the Ontario, Quebec, and Alberta elections. Of those seats which Fournier’s model failed to predict, most were within the margin of error.

Much of this accuracy comes from the attention Fournier pays to the specific histories of individual ridings. Historical trends are used to generate a “floor” and often a “ceiling” of support for each party in the riding. Then, when new polls come out, he deconstructs each region to determine how to adjust the projection for individual ridings. Fournier also makes significant use of demographic data, which is key in predicting some of the more surprising results. In the Quebec provincial riding of Sherbrooke, left-wing Quebec Solidaire won for the first time in the riding’s history. Without accounting for the party’s targeting of the riding’s high student population, most models wouldn’t even list the party as competitive, which Fournier’s model did.

Although Fournier resists being called a political analyst, his profound grasp of the challenges and advantages of each party was made obvious when we picked his brain about the upcoming federal election.

For the incumbent Liberals, he believes their struggle will be maintaining the weak electoral coalition of youth and left-leaning voters that just barely brought the party over the majority threshold in 2015. “Trudeau promised electoral reform. He promised to be greener. Can he hold that four years later, with broken promises?” questions Fournier. If not, “Trudeau might be left with only the Liberal base, and that’s not enough.”

For the Conservatives, it’s also about scraping together an extra layer of voters beyond the base. For right now, predicting a majority for either party is very difficult.

Neither the Conservatives nor the Liberals should spend too much time worrying about the remaining third parties, says Fournier: “It’s the ground game that counts, and it isn’t the Greens or the NDP that have it.”

Fournier questions the Greens’ strategy, wondering if they have one at all. Even with the relatively higher support in the polls, he doesn’t believe they will be a serious threat until the party starts targeting specific ridings. In his mind, “you can cry all you want about proportional representation, but to change the system you have to beat the system.”

As for Jagmeet Singh? “If he’s still leader of the NDP on October 22nd, I’ll be very surprised.”

Beyond the parties’ shifting strategies, certain regions have the potential to tip the balance on election night. The biggest barometers are the South Shore of Montreal and the 905. These “suburban areas in Montreal or Toronto could make or break the election,” warns Fournier. The Vancouver area will also be interesting to watch, due to the region’s extremely competitive races. In fact, we shouldn’t be surprised if there are a few ridings in Vancouver where the seat is won with just over 25 percent of the vote.

With all of these contingencies, Fournier is nervous heading into the upcoming federal election. As he warns his readers, “if I call 90 percent of the ridings right, that means I miss 30.” In an election as close as this one is shaping up to be, 30 seats can completely change the game.

Beyond the 2019 election, Fournier has plans to cover the upcoming American presidential election. When we asked if he plans to cover any other elections around the world, he told us “it’s a boring answer, but I have to survive.” Although he has discussed it with his wife, leaving his day job to pursue projections full-time is not in the cards. Without being able to dedicate additional time, Fournier is skeptical about covering more elections than he can confidently follow. “One bad result can cost you,” he explains.

Impressed with Fournier’s ability to juggle his growing political projections gig along with a regular life, we asked him what advice he has for university students. “Early in my undergrad at McGill, I wanted to quit everything and completely change degrees,” he recalled. After his parents told him to tough it out, Fournier pushed through the harder times and finished his degree in the field he loved. His advice for us? “Follow your passions, but keep going. Oh, and learn to code.”

More generally, Fournier advocates for taking the high road. In practice, this means not getting into Twitter fights – something he learned from fellow polling analyst Eric Grenier. Fournier admits that this is easier said than done, and something he still struggles with. “Being online is hard,” he says. “And I know I’m a white male, so I get it easy, but it still hurts.”  He described it as the worst part of running 338Canada.

Philippe J. Fournier’s projections can be found at 338Canada.com.