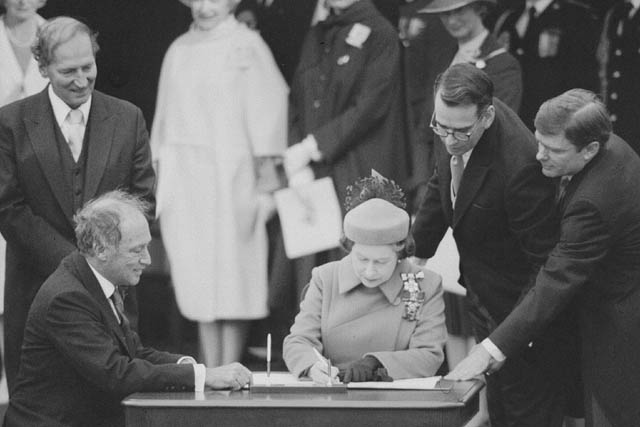 Constitutions, in essence, are expected to be relatively unchanging in order to enshrine and uphold the rights of the population to which they apply. However, constitutional amendments can also significantly improve the ability to protect those same rights.

In Canada, the Constitution Act of 1982 is arguably an example of such a successful amendment, known for its enumeration of rights called the Charter of Rights and Freedoms. While many of the rights and freedoms included in the Charter were scattered across various statutes prior to 1982, such statutes were not constitutionally entrenched, and were thus liable to be overruled by the legislature. By constitutionally entrenching rights such as freedom of speech, freedom of religion, security of person, and the right to life, the Constitution Act set limits to government activity and left Canadian citizens better protected under the law. [1]

Such a decision to alter the original constitution is an implicit nod to the school of thought known as living constitutionalism. One of the most prominent proponents of this perspective is Andrei Marmor. In Marmor’s work, “Constitutional Interpretation,” he argues that constitutions are intrinsically tied to moral values. [2] By establishing rights that need to remain free from government infringement, constitutions contain statements about the types of values that should be fostered and prioritized in a particular society.

Marmor argues that it is unclear why citizens should be bound to the moral values that the founders of such constitutions prioritized. Since individuals have such disparate but equally valid views of morality and conceptions of the good, it is dubious to claim that the founding fathers had superior moral knowledge that authorized them to bind future populations to the same principles. [3] Rather, it is more reasonable to adapt the constitution as moral values evolve over time. In doing so, the constitution remains relevant to the citizens that it protects.

While this argument may appeal to our modern intuitions, some question whether altering the constitution to fit the sentiment of the majority erodes the constitution’s function as a protector against the majority. Originalism, a position defended by Antonin Scalia in his work, “A Matter of Interpretation,” is the view that the constitution should be invoked according to its original content and intentions. [4] To originalists, such practices would limit the “tyranny of the majority,” or the decisions made by the majority that risk harming the minority. [5] Constitutions constrain the actions of the populace, in order to guarantee rights for each individual, regardless of one’s place in society. [6]

In reconsidering the Charter, originalism may not appear to apply. It is unrealistic to argue in this case that the rights enshrined in the Charter, such as freedom of speech, political equality, and the right to liberty, can be considered as an unjustified appeal to prevalent moral ideals, thereby compromising the capacity of the constitution to defend against the power of the majority. Rather, the living constitutionalist argument that, by granting these rights to all citizens, such an amendment rightfully expanded constitutional rights for Canadians seems more plausible.

Nonetheless, some cases may draw different conclusions. Consider the case of the 1984 attempt to introduce a constitutional amendment that would grant the Senate a suspensive rather than absolute veto on legislation proposed by the House of Commons. [7] While the power of absolute veto allows the Senate to require amendments to legislation before it can be passed, the suspensive veto would limit senatorial power by allowing a rejected bill to become law if the House of Commons simply passed the bill for a second time with a majority vote. [8]

Based on the arguments supported by living constitutionalism, this proposal to increase the power of elected officials would reflect the democratic value that the input of voters is the most important, and thus, would justify an amendment to the constitution to better reflect the values widely held in society.

In contrast, supporters of originalism would find this potentially dangerous. Decreasing the power of the Senate in relation to the elected majority might hinder the chamber’s capacity to act as a “chamber of sober second thought”: a chamber in which officials can credibly review legislation and its potential impact on Canada as a whole, regardless of their identification with the majority. [9] Thus, to modify the constitution based on prevalent opinion would act counterintuitively to the constitution’s original goal of protecting individuals against the potential abuse of power.

Given the applicability of both theories, it is clear that both hold validity in constitutional interpretation. While the application of originalism would be valid in the case of potential Senate reform, it is an overstep to claim that updating the moral values of the constitution is undemocratic. In fact, constitutional amendments have historically increased the democratic quality of society. Without them, many individuals would not be guaranteed the same political rights and liberties, thereby violating the fundamental notion of democracy: that the input of all citizens should be treated equally before the law.

Conversely, while living constitutionalism has historically helped to expand rights and freedoms for Canadians, constitutional amendments are not guaranteed to do so. In other words, it is naïve to claim that the opinions of the majority are always morally justifiable, if concerned with morality at all. To a certain extent, it is prudent for the constitution to maintain a degree of separation from prevalent moral ideals. Overall, lawmakers must continue to balance the application of both theories in order to preserve constitutional quality.