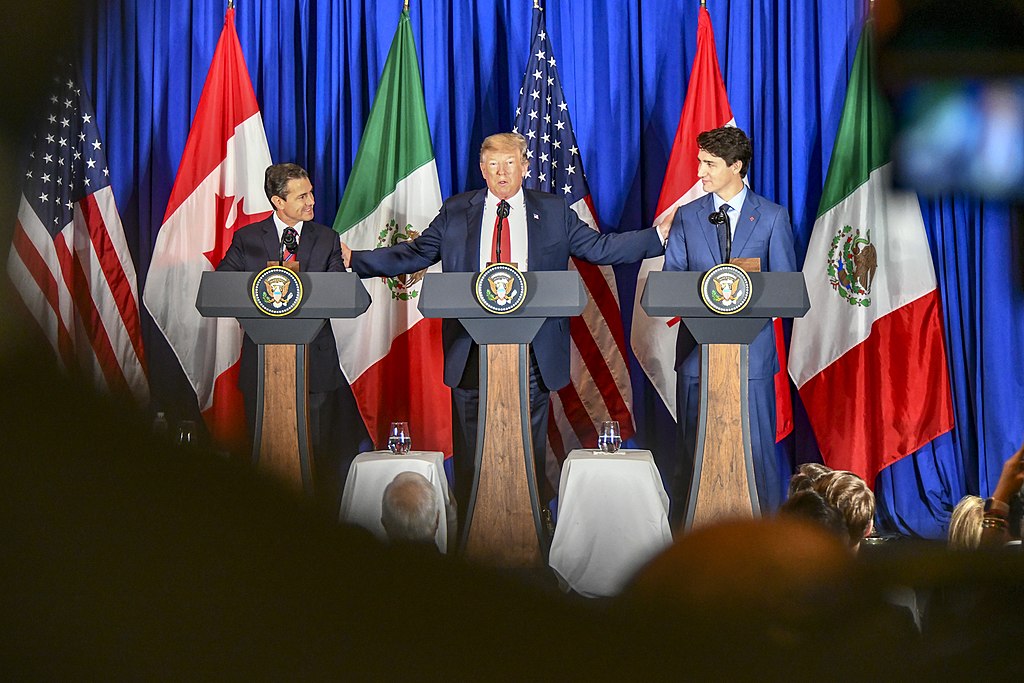 In 2018, President Trump signed a landmark trade agreement that could potentially define his political legacy: the US-Mexico-Canada Agreement, otherwise known as the USMCA. A revised version of NAFTA, the USMCA governs the economic relationship of the three countries comprising North America: the United States, Canada, and Mexico.

Central to his popular campaign pledge to reign in the free trade agreements he views to be detrimental to long-term American prosperity, this important agreement would allow President Trump to check off a major agenda item in the midst of his administration’s otherwise unsuccessful effort to reduce America’s trade deficit with foreign rivals like China.

What is the USMCA?

The USCMA marks the culmination of efforts that began in the early 1990s with the negotiation and ratification of the North American Free Trade Agreement (NAFTA) in 1993. This original trade agreement, which the USMCA significantly revises, removed protectionist trade barriers in the US, Mexico, and Canada, and allowed a large degree of free movement of goods and capital across the continent.

Despite skepticism and even outright opposition from labour unions, protectionist interests, and liberal Democrats, NAFTA passed Congress with broad bipartisan support. This was largely a result of the Democratic Party’s drift to the ideological centre and the bipartisan establishment consensus on pro-corporate neoliberal foreign trade policy.

However, this support has wavered in recent years as NAFTA has been credited with the loss of tens of thousands of manufacturing jobs to Mexico and the decline of America’s industrial sector. It has also been criticized as disproportionately beneficial for Canada at the United States’ expense. For this reason, protectionist factions in both parties, embodied by Bernie Sanders and incumbent President Donald Trump have campaigned on overhauling or repealing NAFTA.

The Trump administration’s renegotiated version of NAFTA (USMCA) thus extracted concessions from Canada and Mexico designed to end the flow of jobs out of the US and create fairer terms of trade between the US and Canada.

Among its many revisions, the USCMA attempts to force Mexico to enforce much stricter minimum wage floors and labour regulations than currently in place in a bid to increase labour costs in Mexico, thus reducing corporate America’s habit of outsourcing to that country. It also mandates that a certain percentage of automobile parts be manufactured in the US. Additionally, the agreement gives the US agricultural sector increased access to Canada’s dairy market, which the US has criticized as being unfairly and hypocritically protected from American competition.

The USCMA faces an uncertain future. Rather than rushing the deal through in the last few months of the Republican-controlled 115th Congress, President Trump chose to wait and seek ratification after the new divided Congress was seated in early 2019.

This means that Trump is now tasked with convincing House Democrats, most of whom campaigned against the president’s policies, to support the most significant rewrite of US government trade policy in decades. With the days of bipartisan legislating long gone and Washington increasingly consumed by partisan toxicity, this will be a heavy lift for some Democrats.

Indeed, talks on a multi-billion dollar infrastructure package, a rare area of bipartisan agreement, suddenly broke down earlier this year amid rising tensions between the president and House Speaker Nancy Pelosi.

To make matters worse for President Trump’s hard-won agreement, House Democrats appear increasingly likely to impeach the president and seek his removal from office in a Senate trial. Despite the apparent merits of Democrats’ case against Trump in the impeachment battle, impeachment undoubtedly carries the political benefit of weakening Trump heading into reelection.

Given this, Democrats may not want to give the President a major bipartisan (and thus legitimizing) accomplishment to tout on the campaign trail, as they simultaneously seek the premature end of his presidency.

As well as this, President Trump has on many occasions indicated he will not work with Democrats intent on investigating his scandals, even if it means the demise of his legislative priorities. The confluence of these factors may explain the now-stalled talks between Nancy Pelosi and the White House regarding gun safety legislation that spawned cautious optimism prior to the Ukraine scandal.

Despite these seemingly worrying developments, murmurs of a potential deal on the USMCA have nonetheless spread across Washington. This stems from a political calculation among Democrats that working with the President on NAFTA may present a rare departure from the typically zero-sum nature of modern legislating.

In addition to pleasing pro-labour Democrats with working-class constituencies as well as the party’s populist wing, passing the USMCA would allow freshman Democrats in swing districts to tout a major legislative achievement as they run for re-election in 2020.

House Democrats have quite literally passed zero signature bills into law, given that virtually all Democratic legislation has died in the Republican Senate. Representatives hungry for a way to signal to voters that they have delivered on their promise to improve life for ordinary Americans in a collaborative rather than combative fashion may be tempted to vote for the bill.

Cognizant of this, Republicans seem open to incorporating Democratic amendments and unrelated sweeteners into the USMCA ratification bill, such as a potential provision strengthening pensions for seniors, a long-delayed Democratic priority.  As Nancy Pelosi and the White House cautiously continue negotiations, it remains to be seen which of the aforementioned factors ultimately doom or boost President Trump’s signature trade policy’s chances for passage.

Image by the U.S. Department of State via Wikimedia Commons