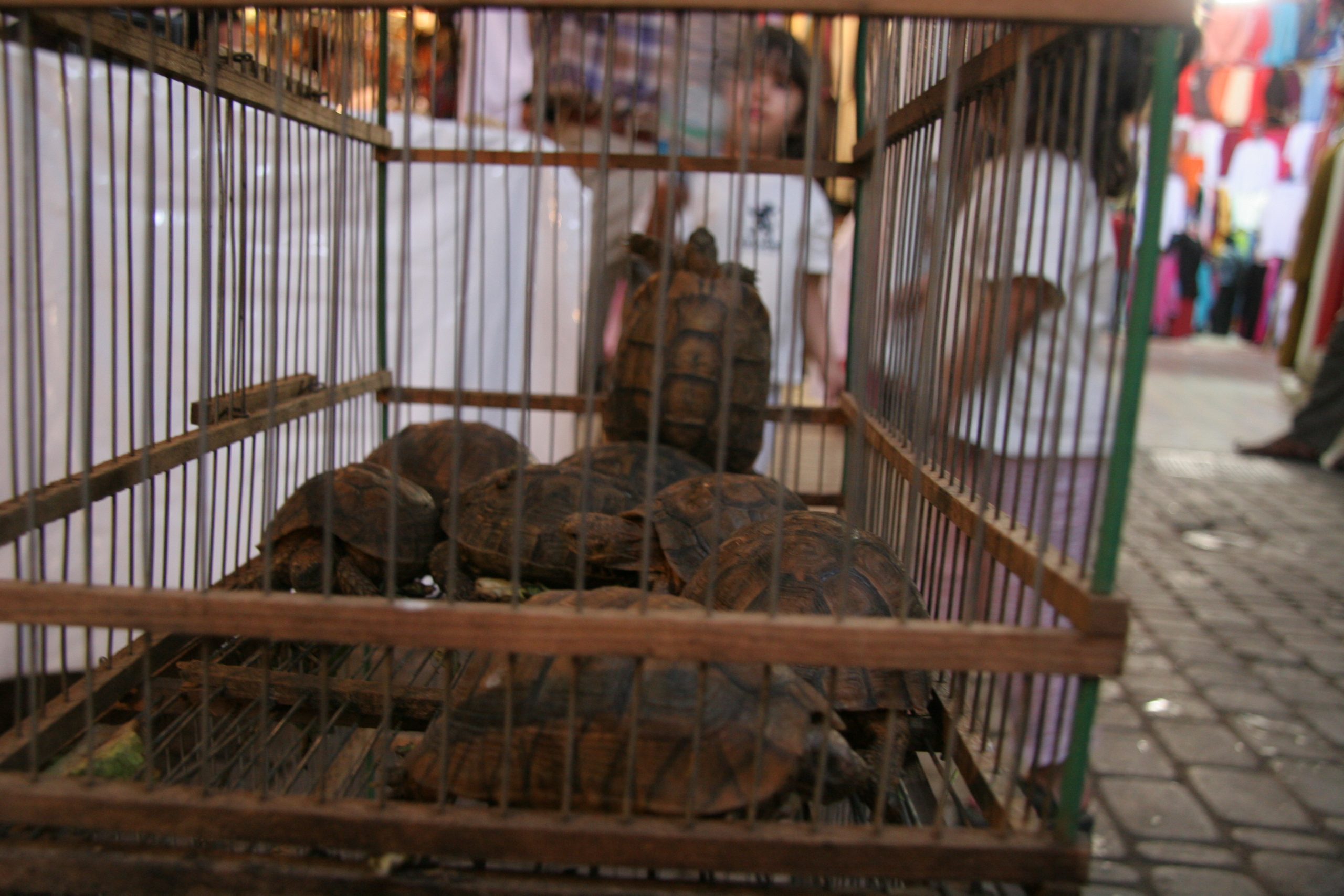 On Sunday, March 28, 185 baby tortoises were found in a suitcase at the Galápagos Ecological Airport. The luggage was heading to the port city of Guayaquil in Ecuador when airport officials noticed the animals in a routine inspection. Ten of them had already died, five more perished by Monday. All of them were less than three months old. Ecuador’s environment minister, Marcelo Mata, described the deed as a “crime against the country’s wild fauna and national heritage.”

Police officer Nixon Alejandro has been arrested and charged with committing a crime against wild flora and fauna, which carries a three-year prison sentence if found guilty. It seems likely that this was not Alejandro’s first stunt. Using plastic wrap is a technique commonly used by smugglers to immobilize animals in the luggage to reduce risks of being caught. Additionally, the tortoises were taken from the wilderness, not the highly controlled breeding centers in the Galápagos National Park. They are a valuable commodity as a single hatchling tortoise can bring up to USD $5,000 to a seller on the international markets.

Understanding the Turtle and Tortoise Trade

The trade of tortoise and turtles is not only illegal under Ecuadorian national law, but also at the international level. The global trade of all marine turtle species is prohibited in the more than 160 countries that have signed the Convention on International Trade of Wild Species of Fauna and Flora (CITES). Moreover, several more species are protected in the treaty’s appendixes, including the Indian star turtle, the ploughshare tortoise and the radiated tortoise.

However comprehensive, CITES faces a significant enforcement problem. Indeed, the wildlife trade shows no signs of slowing down. It is also not limited to the South American continent. The turtle and tortoise trade is most important in South East Asia, particularly Malaysia, India and Bangladesh. In most cases, sting operations can catch thousands of turtles. While the most recent Galápagos case shocks due to the general sanctity of the islands, it is a minuscule part of a much larger phenomenon.

The trade is driven by increased demand for these animals from the growing middle class across Asia, but also from European and North American buyers of exotic pets. Other species, such as the Indian soft shell turtle, are also commonly used in Chinese traditional medicine. This desire for these foreign creatures has had significant consequences on the overall population of turtles and tortoises. Indeed, since they reach maturity quite late, they often do not have the opportunity to reproduce before being caught and sold. In Madagascar, the population of radiated tortoises was cut down in half between 2013 and 2018, from 6.5 million to 3 million. Other species like the ploughshare tortoise are now endangered on the African island. Needless to say, trading in wildlife animals can also have disastrous consequences on human health, as seen with the COVID-19 pandemic.

The supply chain for turtles and tortoises is similar across the world. In India, traders recruit poor fishermen in Uttarakhand, Uttar Pradesh and Bibar provinces. As they have experience navigating the territory, they can easily catch the animals and bring them to collectors who then carry the turtles to underground collection centers from where they will be shipped across the continent. Smugglers use a series of transportation methods depending on their location. In India, the train is predominant. Individuals also walk or take a boat through the porous borders with Nepal, Bhutan, Myanmar and Bangladesh. In other places, airports are the most prominent trading point, as in the Galápagos.

Once they obtain a certain number of animals, smugglers will turn to social media, especially Facebook, to reach potential clients. Payments are often done through PayPal. This virtual openness has caused scholars such as Tanya Watt from Northumbria University to call for greater collaboration between social media, insurance companies and banks to catch perpetrators who are often far from subtle with their dealings.

One case study is the December 2020 arrest of Kang Juntao, a Chinese man who ran a $2.2 million smuggling ring between the US and Asia. Operating from China, Kang recruited individuals, mostly Chinese college students, across five states to collect turtles and tortoises. Kang then connected with various buyers through social media and organized the animals’ transfer to their final destination. He was extradited to the US from Malaysia where he will face trial.

Such large operations, however, can only exist due to a significant level of corruption. Indeed, border officials are often paid to overlook suspicious shipments. Port Klang in Kuala Lumpur is known to smugglers and environmental activists as the most corrupt.

Activists and non-governmental organizations have tried to remedy the problem with mixed success. Eco Activists for Governance and Law Enforcement (Eagle) is one such organization. Founded by Ofir Drori, an Israeli army veteran and former freelance journalist, Eagle brings cases against poachers that are so strong they are immune to corruption attempts. Their first mission was in Cameroon in 2003 where the organization supported the entire chain of supply, from informants to prison wardens, to ensure that the prosecution had strong evidence and that sentences were served out. After getting 500 convictions for wildlife traffickers in Cameroon between 2006 and 2013, the project expanded into eight more countries with funding from the US Fish and Wildlife Service. However, during their project in Madagascar, several convictions were overturned after only months, freeing the perpetrators.

Due to the lack of enforcement and rising demand, it is unlikely that the trade will halt anytime soon. However, the problem can be addressed at the local level. Indeed, in Madagascar, the trade of turtles and tortoises boomed after a military-backed coup in 2009 and a severe drought that pushed many in already precarious economic conditions towards the lucrative smuggling business. Another unlikely victim is ex-rugby player Martin Kennedy who was convicted of wildlife trade, including exporting turtles to Thailand, in 2019. In 2016, Kennedy was banned from playing rugby due to a doping scandal. With large loans he took to afford his legal fees, he turned to smuggling out of desperation. By elevating people out of poverty, one could cut down the supply of animals.

As Watt notes, most smugglers are white-collar criminals, as seen in the Kang case. Hence, as mentioned, greater collaboration between wildlife officials, financial institutions and social media companies can help bring these middlemen to justice, especially in jurisdictions where the rule of law needs to be enforced in the long term.

Featured image by destinyuk* and obtained via Creative Commons under a CC BY-SA 2.0 license.