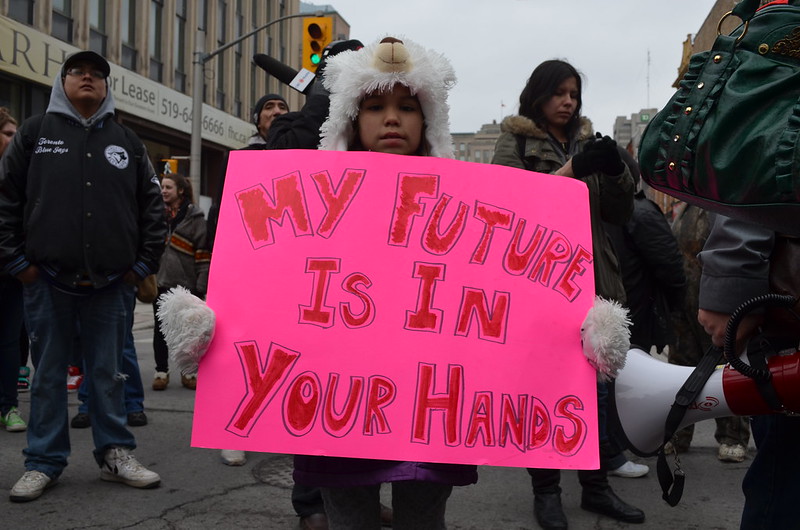 Child welfare services in Canada are designed with the intent of protecting children and encouraging family stability. However, state-sponsored child welfare services respond to reports of children in physical or emotional danger primarily through intervention; for many Indigenous families, the idea of state-sponsored intervention into family life is deeply alarming, as it echoes historical practices of state intervention during the residential school era. Throughout Canadian history, generations of Indigenous peoples have grown up without their families, communities, and culture, which were denied to them through interventions by the Canadian state. In 2016, Statistics Canada reported that, despite accounting for around 7 per cent of the overall population, Indigenous children represented roughly 52 per cent of the children in foster care. In recognition of this statistic, it is necessary to look at what is being done to address the disproportionate representation of Indigenous children in the current child welfare system.

The Trudeau government recently passed Bill C-92, titled “An Act respecting First Nations, Inuit and Metis children, youth and families.” This bill affirms Indigenous jurisdiction over child and family services in Indigenous communities. The legislation was co-developed with Indigenous provincial and territorial partners, with the intention of improving the health and well-being of future generations of Indigenous children by reducing the number of children in state care and avoiding family separation. This bill allows for Indigenous communities to develop policies and laws based on their own particular cultural norms and circumstances, while transitioning towards exercising partial or full jurisdiction over child and family services.

The establishment of this bill addresses the Truth and Reconciliation Commission’s Calls to Action for both Indigenous and non-Indigenous peoples, an effort to repair the damage to the relationship between Canada and Indigenous peoples caused by residential schools. The bill specifically addresses calls number one, the commitment to reducing the number of Indigenous children in care, and four, the call to enact Indigenous child-welfare legislation establishing national standards for Indigenous child custody and to affirm the right of Indigenous governments to maintain their own child-welfare agencies. Bill C-92 was also a response to the Canadian Human Rights Tribunal’s 2016 report finding severe inequalities in on-reserve child and family services programs, inequalities driven by underfunding from the federal government.

Since Bill C-92 was passed, Cowessess First Nation in Saskatchewan has made a monumental step in reclaiming jurisdiction over child welfare through the passing of the Miyo Pimatisiwin Act. This act will allow for Cowessess First Nations to self-govern and make decisions in the best interest of their children and families, and will enable  children in care to stay connected to their communities. Chief Cadmus Delorme explained that the plan is to reset the way in which child welfare is approached, by focusing on preventing the separation of children from their families, as well as taking proper steps to identify each case from a psychological, emotional, and spiritual perspective.

As the damages of the residential school system are still felt and reinforced through intergenerational trauma, many Indigenous peoples today suffer from increased mental health issues and substance abuse problems, making parenting increasingly difficult. A study conducted in Vancouver sought to better understand intergenerational trauma by examining the relationship between familial residential school exposure and personal child welfare system involvement among those who use drugs. The researchers concluded that having a parent or grandparent who attended a residential school significantly increased a person’s odds of being involved in the welfare system, therefore suggesting that intergenerational trauma is a major factor in the disproportionate representation of Indigenous children in state care. Bill C-92 can be seen as a step in the right direction in healing this trauma and addressing the need to end the cycle of state-intervention into Indigenous family life.

Cowessess First Nation’s steps to self-govern based on children and family needs demonstrate  one way in which Bill C-92 has succeeded.  However, the bill is not without flaws. While it allows for Indigenous jurisdiction over child and family services, it fails to guarantee funding for Indigenous communities to implement their own child and family services laws. Without clear legal requirements for funding, the stability and long-term sustainability of Indigeneous-operated welfare services will likely be negatively affected. Funding is left to be determined in negotiations between the Indigenous governing body and the provincial and federal governments. An agreement with the Assembly of First Nations signed by Indigenous services minister Marc Miller established a forum in which Ottawa and Indigenous peoples can negotiate funding agreements in order to support Indigenous communities, but this agreement lacked specification of an explicit monetary amount. Miller has also stated that the federal government will be working closely with Indigenous communities to determine funding based on individual needs.  This has raised concerns for many Indigenous peoples, due to the long history of broken promises from the Canadian state.

There has also not been unified support across the country surrounding Bill C-92. In December 2019, only a few weeks before the bill was set to pass, the Quebec government announced it would be contesting the constitutionality of the law. Premier Francois Legault argued that the bill interfered with the province’s jurisdiction over social services and youth protection, demonstrating a failure to recognize how the current system is failing Indigenous families.

Featured image “Idle No More” by The Indignants and obtained via Flickr under a CC BY-ND 2.0 license.