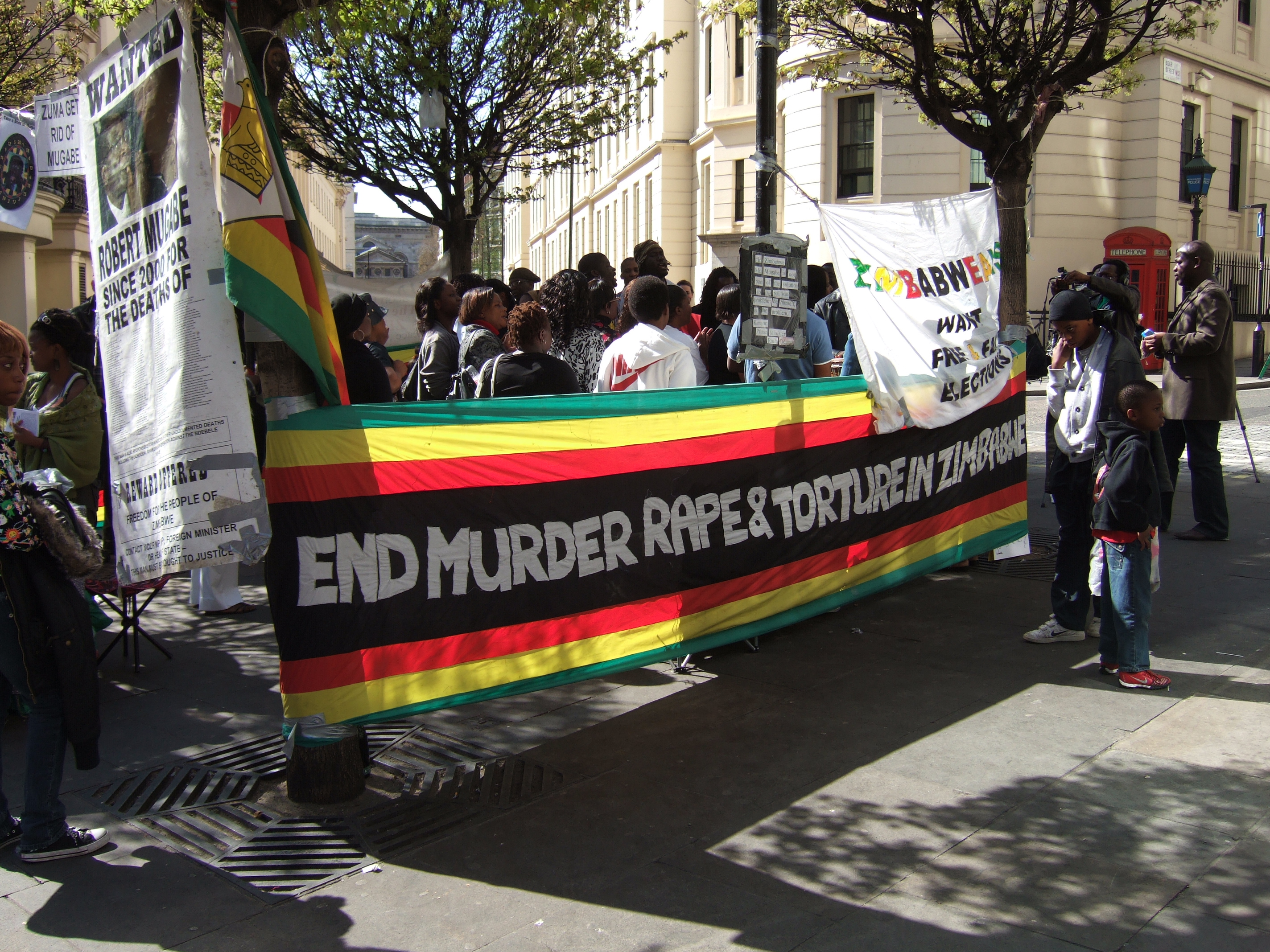 In 1980, the Zimbabwe African National Union (ZANU) led by Robert Mugabe gained independence from the white supremacist state of Rhodesia. Mugabe won the first elections in Zimbabwe and had been in power ever since, Until a series of events over the past month forced him out of power on November 21st.

On November 6th, Mugabe, now 93, astounded his nation and the world with the firing of his long time right hand man, Emmerson Mnangagwa. It was a move to secure the spot of his successor for his wife, Grace Mugabe. Grace Mugabe is widely disliked and is deemed to be unqualified to lead a country she has taken advantage of. Mnangagwa’s removal started a political crisis which escalated to a point where  army commander Chiwenga announced that the army would not hesitate in “stepping in” to prevent crisis. Two days later, Mugabe was placed under house arrest in what appeared to be a coup. In the following days there was speculation as to whether this was a complete seizure of power or whether Mugabe would still find a way to retain control.

There were celebrations on the streets, including an anti-Mugabe demonstration, which was attended by over 1.5 million Zimbabweans. This massive public support for a transition of power led to Mugabe being disowned by his party and a call for his impeachment. Just as the impeachment proceedings were beginning on November 21st, Mugabe resigned from his post, leaving the office of President to the people’s favorite, Mnangagwa. Mnangagwa, a veteran politician in Zimbabwe, has the potential to be either a great leader for Zimbabweans, or a corrupt dictator akin to Mugabe.

To understand the potential magnitude of this transition of power, it is essential to look at four elements: the condition of Zimbabwe under Mugabe, Mnangagwa’s track record, potential effects of the coup on military power and potential reactions by the international community.

Mugabe’s rule of Zimbabwe has been highly controversial, drawing deep criticisms from the west while being mostly supported by fellow African nations. In the first years of his rule, Zimbabwe was seen as a viable, resource-laden nation, even given the moniker “The Break Basket of Africa”. This economic success was not long lasting and did not facilitate democratization of Zimbabwe. Mugabe is infamous for overseeing of the ‘Gukurahundi’ – the ethnic cleansing of Ndebele people, amounting to tens of thousands of deaths within the span of a year. It is claimed that Mnangagwa was the one orchestrating this brutal campaign on his boss’ orders.

Mugabe’s rule crippled the state’s economy and society. Zimbabwe’s economy collapsed to the point where inflation once reached 79 billion percent. Violence grew sharply as indigenous land reclamation of white owned farms was carried out. There was rampant corruption, which led to an extended participation in the Second Congo War. The war effort was carried out to steal mineral wealth from DRC. Health crises by way of famine and malnutrition were recurrent themes.

Throughout all these horrors, Mugabe was seen as a dictatorial figure by the west and by many of Zimbabwe’s citizens who were not a part of his patronage. Mugabe played his role in Zimbabwe’s struggle for independence, but there is no justification for his long and vicious rule. The symbolic significance of the ousting of Mugabe and his wife has given the people of Zimbabwe a newfound hope for a strong nation.

Mnangagwa has held many positions of power in the ZANU-PF led government, ranging from Minister of Defense to Vice President. While one cannot definitively speculate about the consequences of his rule, his past record serves as a helpful guide. Unfortunately, his  past does not paint a pretty picture. As aforementioned, Mnangagwa was said to be deeply involved in the planning of the Gukurahundi, although he maintains that he had played no part in it. From before independence to until very recently, he was a close ally of Mugabe and showed no reservations with Mugabe’s harsh rule and corruption. His only issue was with Grace Mugabe’s grasp for power. Mnangagwa himself faces allegations of corruption, especially in the looting of diamonds from the DRC.

Despite a murky, at best, political history, Mnangagwa offers some hope to the Zimbabwean people – the possibility of change. The Zimbabwean people have been under Mugabe’s rule for decades and the potential of change has brought them together. While Mnangagwa has much to do to prove his democratic credentials, for now he enjoys the support of his people. He has the power to enact meaningful change in a country desperately in need of a leader they can believe in.

Over the years, the Zimbabwean military has been extremely loyal to Mugabe. He has maintained popular support in the military not only by giving the reclaimed farmland to his military allies, but also by allowing the army to stay involved in the DRC for much longer than necessary. This allowed military officers to  abuse the mineral wealth of the Congo  For this reason, it is important to analyze why the military abandoned and essentially deposed him, and the long-term implications of military power in Zimbabwe.

The military had shown a clear preference towards Mnangagwa as successor to Mugabe. When Mnangagwa was fired, many feared losing jobs and patronage under the less popular Grace Mugabe. It is primarily for this reason that the military intervened, not, as some would suggest, in the name of democracy and change. For now, the military is likely to remain relatively less active, as their preferred candidate is in power, but this may not last forever.

In 2018, elections will be held for next president of Zimbabwe. If Mnangagwa wins, it is likely that the military will do little other than stand behind him and ZANU-PF. But if he were to lose, another military intervention remains a possibility. The military in Zimbabwe remains a strong political force and it has shown no fear in taking power away undemocratically to pursue its own interests. As the rest of this transition unfolds, one should keep a watchful eye on the military and understand that it is not a guarantor of democracy.

In the past, African countries have stood by Mugabe despite international criticism, particularly South Africa and other members of the Southern African Development Community (SADC). They have been careful even while criticizing Mugabe, showing him respect not only as an elder statesman, but also as one of the few remaining independence leaders still in power. The SADC was strongly opposed to Western interference, in an effort to maintain regional stability and a cohesive anti-colonial ideology. Thus, support of local regimes was the strategy of these countries, and justifiably so. However, stability and ideology must be balanced with social and political responsibility.  Reconciling the responsibility to a unified and stable Africa with protection of  human rights has been an issue for many countries. Supporting dictators in the interest of stability is not a sustainable or ethical solution, and Zimbabwe has struggled with this for years. Now that Mugabe is out of the picture, the SADC will hopefully have to commit fewer resources to supporting a despotic leader in the name of regional stability and security, though this is dependent upon Mnangagwa proving himself to be a better leader than Mugabe.

Another aspect is foreign aid. Under Mugabe, Zimbabwe could not feed the population and was dependent upon foreign aid, with many still suffering from malnourishment. Zimbabwe once had the resources to provide for its people, so if Mnangagwa is capable of rebuilding the agriculture that was stunted by Mugabe’s land redistribution, then Zimbabwe could gradually reduce its dependence on aid. This could be the first step in building a strong economy, which creates better jobs and provides education and healthcare to the citizens. But this depends upon Mnangagwa’s ability to build infrastructure, attract foreign investment, keep corruption at bay, and retain wide public support.

As of now, it is for the best that Mugabe is no longer in power. It remains to be seen if Mnangagwa will prove to be a good leader  He has many things going for him: massive support domestically, militarily, and internationally, extensive experience in government, and fertile land. But he will need to show vast improvement upon his character and governance methods to reinstate Zimbabwe as the “Bread Basket”. It is also not entirely certain whether he will retain power after the 2018 elections, in which case the military might launch another grab for power. If this were to happen, it would certainly result in the continuance of an undemocratic society. At this point, it’s really just a waiting game.