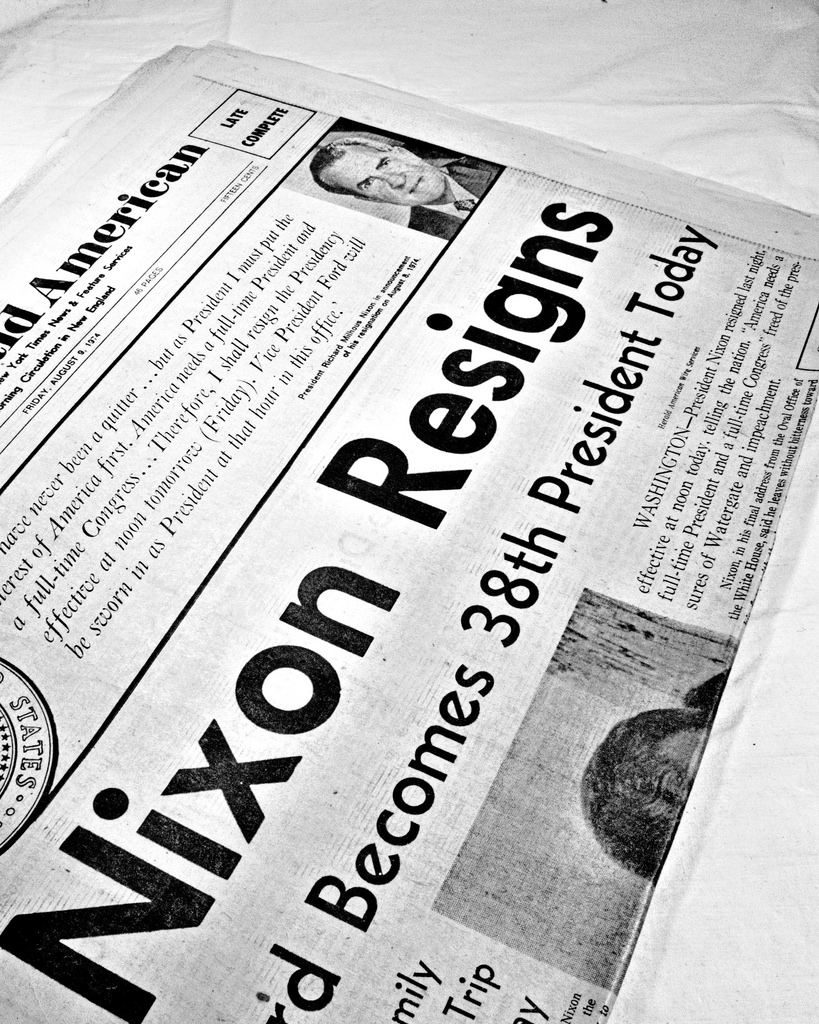 On the morning of October 27th 1787, a trio of New York newspapers, including the Independent Journal, published the first of a series of articles that would eventually become the Federalist Papers. Nearly ten months later, Madison and Hamilton (and Jay) concluded their series with Federalist #85. Having argued at length in favor of the ratification of the US Constitution, their closing remarks were dedicated to pointing out its apparent defects. Chief among them was the lack of constitutional protections for the freedom of the press.

This defect was formally recognized three years later with the adoption of the First Amendment, providing precedent for what would become a democratic standard. Indeed, a free and independent press is seen as a cornerstone of liberal democratic governance in the contemporary era. Journalists are often seen as a crucial “fourth estate” by sacrificing themselves for the public good along the lines of Jacques-Louis David’s idealized subject.

The press and its freedom to report on contentious topics is important for the maintenance of good government for a variety of reasons. First and foremost, it facilitates the spread of ideas among the populace. Hobbes explains in Leviathan that communication between men allow them to formulate ideas. This in turn leads to general understanding and cooperation between them which permits the formation of government and civil society.

Hobbes’ reference to the development of printing underscores the idea that a prolific press is the main mean of transmitting such ideas across a large swath of citizens. Thus, the press and its corollaries (that is, other forms of communication which fall under the purview of constitutional/legal protections for the press) are essential to promote participation in the creation and maintenance of government.

Building on this thesis, the spread of knowledge that occurs with the dispersal of ideas works to educate and inform the populace of diverse issues affecting the polity. By doing so, the press directly contributes to civic education within the state, which leads to increased participation among citizens and intelligent management of the country.

John Stuart Mill in Considerations on Representative Government highlights the need to restrict the franchise to those who are capable of exercising basic reason and intelligent enough to comprehend the issues to be decided upon. Discarding restrictions based on wealth or sex, he argues that the best way of extending the franchise would be to promote education for citizens and cites this reason inter alia for denying representative government to the ostensibly uncouth populations of India. Since this principle is legitimately applied today, as in the denying of the franchise to school children, it can be reasoned that the the expansion of knowledge post-ludus­ brought by the free press works to not only extend the franchise but also to improve it.

Another important way the free press promotes good government is its existence as a check on the government. As Lord Acton’s old adage explains, power tends to corrupt those that wield it, and the expansion of government over an invasive amount of public life has provided politicians with many avenues to abuse their privileges. In his near exhaustive history of the eponymous phenomenon, Carlo Alberto Brioschi in Corruption explains that the free press is crucial in curtailing crimes, patron-client exchanges, and other forms of corruption that might occur in political society.

By constantly being in the spotlight and under the scrutiny of reporters, politicians are forced to moderate their behavior in public and, to a lesser but still important degree, in private. He argues that investigative journalism more often than not becomes what prevents an elected official from accepting a bribe or payoff from a corporation or lobbying group.

The free press therefore becomes the moderator for the court of public opinion which takes the lead in forcing politicians to behave when the traditional governmental institutions are incapable of doing so. Indeed, the free press has contributed and continues to contribute to uncovering scandals with political consequences, including a variety of abuses, ranging from sexual misconduct to political sabotage that lead to investigations and resignations.

An unrestricted and unregulated press with the aforementioned role as diffuser of information is not entirely without its drawbacks. For one, the coexistence of the press and the economic institution of capitalism creates opportunities for ambitious businessmen to co-opt the journalistic freedom by promoting sensationalism in articles as a means of making money. Indeed, media corporations and their owners, the so-called “moguls,” often rise to the top of the economic pyramid and wield considerable power and influence over society.

William Randolph Hearst, whose five grandchildren currently rank among the top twenty-five richest media moguls, pioneered this practice at the turn of the century. By publishing unsubstantiated stories on the “nefarious effects” of cannabis, whose appellation by the Spanish term “marijuana” was popularized by Hearst, he intentionally prompted fears of “Reefer Madness.” By doing so, he encouraged the State and Federal restrictions on cannabis which greatly increased the value of his timber holdings, and which persist to this day.

Another risk is that legitimate and well intentioned news outlets may report on developments that may be seized on by iniquitous actors. Criminal actors have been known to use the media in order to advance their agendas, such as the Zodiac Killer and the Unabomber. Legitimate actors also risk using reported news for nefarious purposes. It was a brief article on page six of the January 7th 1876 edition of The Times that launched King Leopold II’s crusade for a colony in Africa that would devolve into the most morally corrupt and abusive state on the face of the earth.[1]

Furthermore, reports concerning troop movements and military preparations at home have often fallen into the hands of enemy nations through the medium of newspaper outlets. In fact, a contributing factor for the failure of the naval invasion of Gallipoli in 1915 was that the German-led Ottoman garrisons knew that Commonwealth forces were preparing a landing.[2] Thus, Donald Trump may not be so ill advised when he chose to withhold information on his plan to defeat ISIS.

Despite these drawbacks, a free and independent press is essential to promoting and maintaining good governance, especially in democratic regimes where the populace (and decision makers) become more informed by their activities. The current US president’s attitude towards the media, his supporters’ calls to curtail the press, and the ubiquitous presence of (real or false) allegations of “fake-news,” make understanding the importance of a free press a vital contemporary issue. As a reference, on June 15th 1971, the New York Times received an order by a District Judge on behalf of the Nixon administration mandating that they suspend publication of the Pentagon Papers, citing national security concerns. The subsequent Supreme Court case New York Times Co. v. US reaffirmed the American commitment to the freedom of the press, and provided a precedent that should be remembered today.