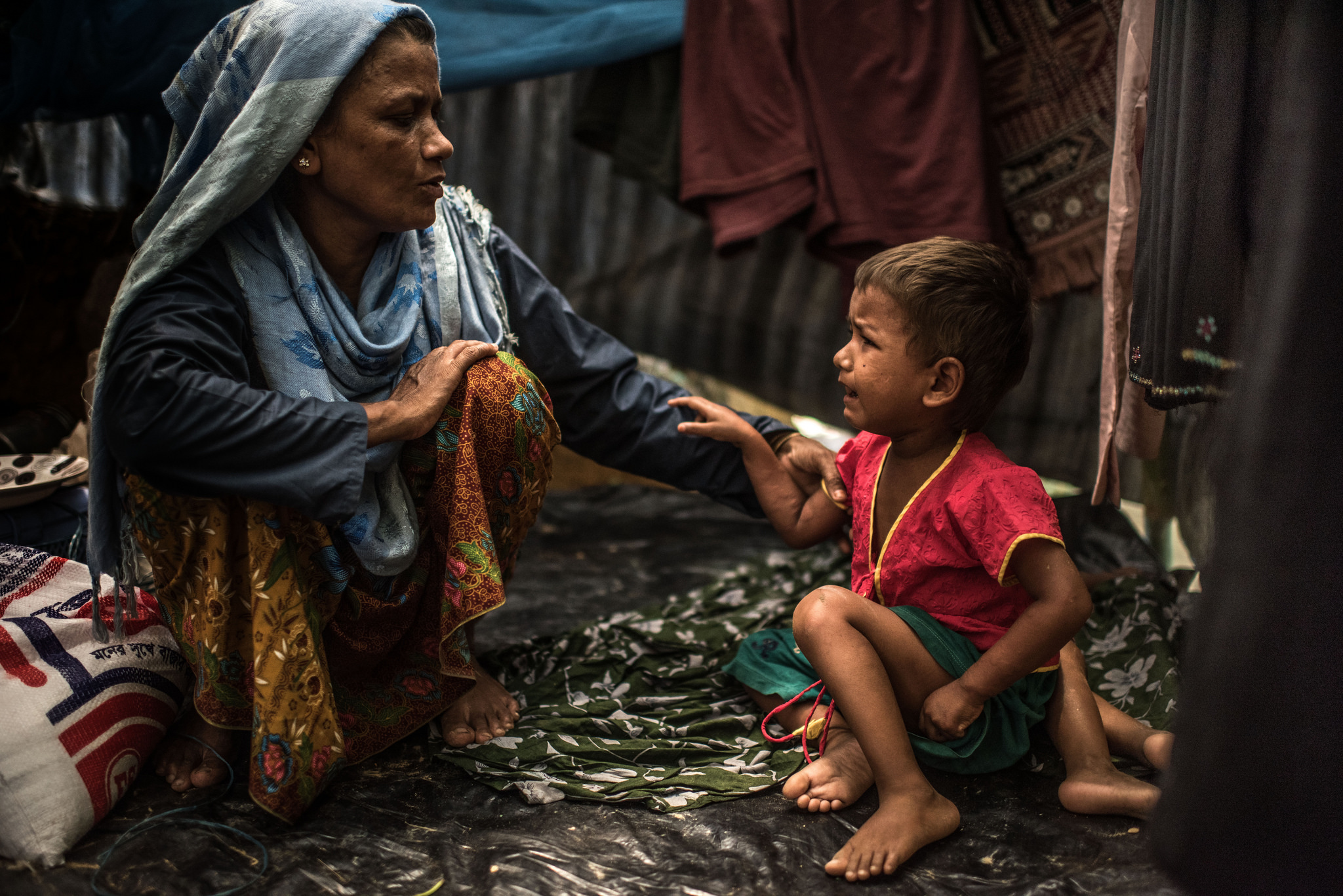 On 25 August 2017, renewed violence in Myanmar’s Rakhine state led to the exodus of hundreds of thousands of Rohingya civilians from their homes. The crackdown on the Rohingya by the Tatmadaw, Myanmar’s military forces, followed attacks on police posts and an army base by a small faction of Rohingya militants called the Arakan Rohingya Solidarity Army. Testimonies from Rohingyas in neighbouring refugee camps recount burned villages and deliberate killing of civilians by the Tatmadaw. Myanmar’s military has responded to the international outcry by claiming such security operations are part of a legitimate counter-insurgency campaign strategy.

Just six weeks after the escalation of the tensions in August, 655 000 Rohingya fled their homes and sought refugee in camps, settlements, and host communities – further adding to the 307 500 Rohingya refugees displaced before the recent escalation.

To make matters worse, a report released in October 2017 by the Office of the United Nations High Commissioner of Human rights (UNHCHR) revealed that Myanmar’s security forces had maneuvered to “effectively erase all signs of memorable landmarks in the geography of the Rohingya landscape and memory in such a way that a return to their lands would yield nothing but a desolate and unrecognizable terrain.” The UN report also claimed that the persecution in Rakhine had “targeted teachers, the cultural and religious leadership, and other people of influence in the Rohingya community in an effort to diminish Rohingya history, culture and knowledge.”

Villages, houses, fields, food stocks, crops and livestock in areas inhabited for generations by Rohingya Muslims have been destroyed or burned by security authorities. New Myanmar military bases and villages have been built on destroyed Rohingya – and also in areas that are still occupied, often forcing villagers to leave their homes. This makes any prospects for Rohingya returning to the area even bleaker.

Discrimination and repression are nothing new for the Rohingyas, a stateless minority group who have endured decades of repression and persecution under successive Burmese governments. The Rohingya population has been declared one of the most persecuted minorities in the world by the United Nations.

The Rohingya are a predominantly Muslim ethnic group who have lived for centuries in  Myanmar, a majority Buddhist country. They differ from Myanmar’s dominant Buddhist groups linguistically, religiously and ethnically. Almost all of the Myanmar Rohingya live in the western state of Rakhine – one of the poorest states in the country – and must obtain government permission to leave. The Rohingya’s roots in the region date back to the 15th century, when thousands of Muslims arrived in Myanmar and established the Arakan Kingdom. During the years of British rule (1824-1948), Rohingya labourers migrated in significant numbers to Myanmar from India and Bangladesh. This migration of labourers was widely rejected by the native population and has been deemed illegal by successive Burmese governments since the country’s independence in 1948.

Previous regimes have refuted the Rohingya’s historical claims, refused to officially recognize the group as one of Myanmar’s 135 ethnic groups, and effectively denied citizenship to the majority of Rohingya under the 1982 Citizenship Law. These policies have rendered  the Rohingya one of the largest stateless populations on the planet. As a result of the law, the Rohingya have been, and continue to be, constrained in their rights to work, travel, marry and access healthcare services. Further, the Rohingya are widely considered Bengali by the Buddhist Myanmar population, who believe the term Rohingya was created for political purposes.

While the Rohingya have long been a persecuted minority, the recent renewal of violence has been unprecedented in proportion. However, unlike previous years, international outcry has proven more persistent and more vocally widespread, being expressed by influential leaders such as Malala Yousafzai, a prominent Pakistani activist.

Myanmar’s current government, led by Aung San Suu Kyi, has often depicted military crackdowns in Rakhine as necessary means of defending the country against “increasing terrorist activities.” Suu Kyi has demonstrated neither the political will to address the humanitarian crisis in Rakhine, nor a sufficient understanding of that crisis to be able to address it. Aung San Suu Kyi has been internationally criticized for her failure to condemn the persecution and ensure the protection of the Rohingya, despite the fact that she does not exercise functional control over the military. The Nobel Peace Prize laureate and her government do not have sufficient power to move the military under civilian control. The power of the Tatmadaw, established long before Aung San Suu Kyi’s election, grants it the right to appoint 25 percent of seats in parliament and veto power over constitutional amendments.

Hoping to deflect UN efforts to investigate the country, Aung San Suu Kyi commissioned Kofi Annan to lead an investigation earlier in 2017. Despite the fact that the commission’s mandate did not include investigating allegations of human rights violations, the commission issued recommendations on how to  address restrictions on Rohingya freedom of movement, religion and citizenship. It is highly unlikely, however, that the recommendations will be implemented because of the the Tatmadaw’s veto power over the government decisions.

Further deterring domestic government leaders from addressing the plight of the Rohingya is widespread anti-Rohingya sentiment in Myanmar, which makes it politically unsafe for the government to take any step in that direction.

The recent escalation of violence is of particular importance for the international community in that it constitutes the tipping point in a long series of violations of human rights which have demonstrated the difficulty of implementing the Responsibility to Protect (R2P) principle on the ground. As in many previous cases, efforts to implement the principle are often insufficient and have failed to deliver on the intended objectives.

The failure to go beyond verbal condemnations have ultimately perpetuated the status quo and signaled the international reluctance to actively do more than that. Such a failure to prevent large-scale crimes against humanity raises the question of whether or not the credibility of R2P doctrine  has reached a point of exhaustion, especially given war crimes in Syria, Yemen, and more.

The current crisis in Myanmar has also demonstrated that increasing global integration does not necessarily facilitate the coordination of humanitarian international efforts, especially when the political will to do so is absent. Entire regions are dragged under the economic influence of regional superpowers, such as China and Russia, with the international community’s tacit approval of the formation of spheres of influence impervious to international intervention.

Although institutional barriers and problems of coordination on a unified peace strategy have doubtless contributed to the retreat of the humanitarian action on the global stage, they fail to account for the absence of independent initiatives undertaken by other countries to defend the human rights of the Rohingya.

That being said, international efforts to alleviate the plight of the Rohingya have been most remarkably undertaken by neighbouring countries, most notably Bangladesh, who continue to open their doors to Rohingya refugees. In light of the recent exodus and rise of Rohingya refugees, countries like the United States, Canada, Norway, and South Korea have increased their humanitarian assistance.

The international community has condemned  Myanmar’s military campaigns and the government’s silence. The US has called for the Tatmadaw to “respect the rule of law, stop the violence and end the displacement of civilians from all communities.” China has told the international community that it “should support the efforts of Myanmar in safeguarding the stability of its national development.” The UNHCHR has referred to Burma’s Rakhine State as a “textbook example of ethnic cleansing.” The United Nations Security Council (UNSC) appealed to the Myanmar government to put an end to the violence.

UN officials and Human Rights Watch have described Myanmar’s persecutions of its Rohingya minority as an ‘ethnic cleansing’, although many insist it is more accurately defined as genocide. There has been a widespread hesitance to brand the persecution as genocide, however , since such a formal recognition by the Security Council would legally bind the UN to intervene.

Despite international condemnation, sanctions have yet to be imposed by the UNSC. Unilateral agreements on punitive measures within the UNSC have proven difficult to reach. Russia and China have vested interests in Myanmar that prevent unanimous agreement from being reached; the latter is currently building a branch of its New Silk Road infrastructure that crosses through Rakhine state. Both states have often obstructed initiatives to act on the persecution of the Rohingya through the use of their veto votes at the UNSC.

Despite the difficulties of reaching an agreement within the UNSC, international governments should at least impose targeted sanctions against military officials engaged in abuses of human rights. Concerned governments should not wait for the Security Council to unanimously approve actions to address the crisis in Myanmar. Broad-based economic sanctions require consensus and multilateral negotiations, which may stall and prove ineffective.

Although condemnations are necessary to put pressure on and raise the political price for Myanmar’s government and security forces, the continuation of large scale human rights abuses in Rakhine State have shown that these are not sufficient to address the political crisis. They must be accompanied by committed punitive measures, even if they are mostly symbolic.

International efforts to establish mechanisms of accountability, and to establish a Commission of Inquiry mandated by the UN Human Rights Council could prove difficult to realize, but they would nonetheless demonstrate the consternation of the international community with regard to abuses of human rights on Myanmar’s soil. Such efforts could also be a stepping stone for an eventual truth and reconciliation programme.

So long as key domestic actors and the international community fail to muster the political will to offset the current stalemate in Myanmar, the Rohingya humanitarian crisis will ultimately continue to escalate.