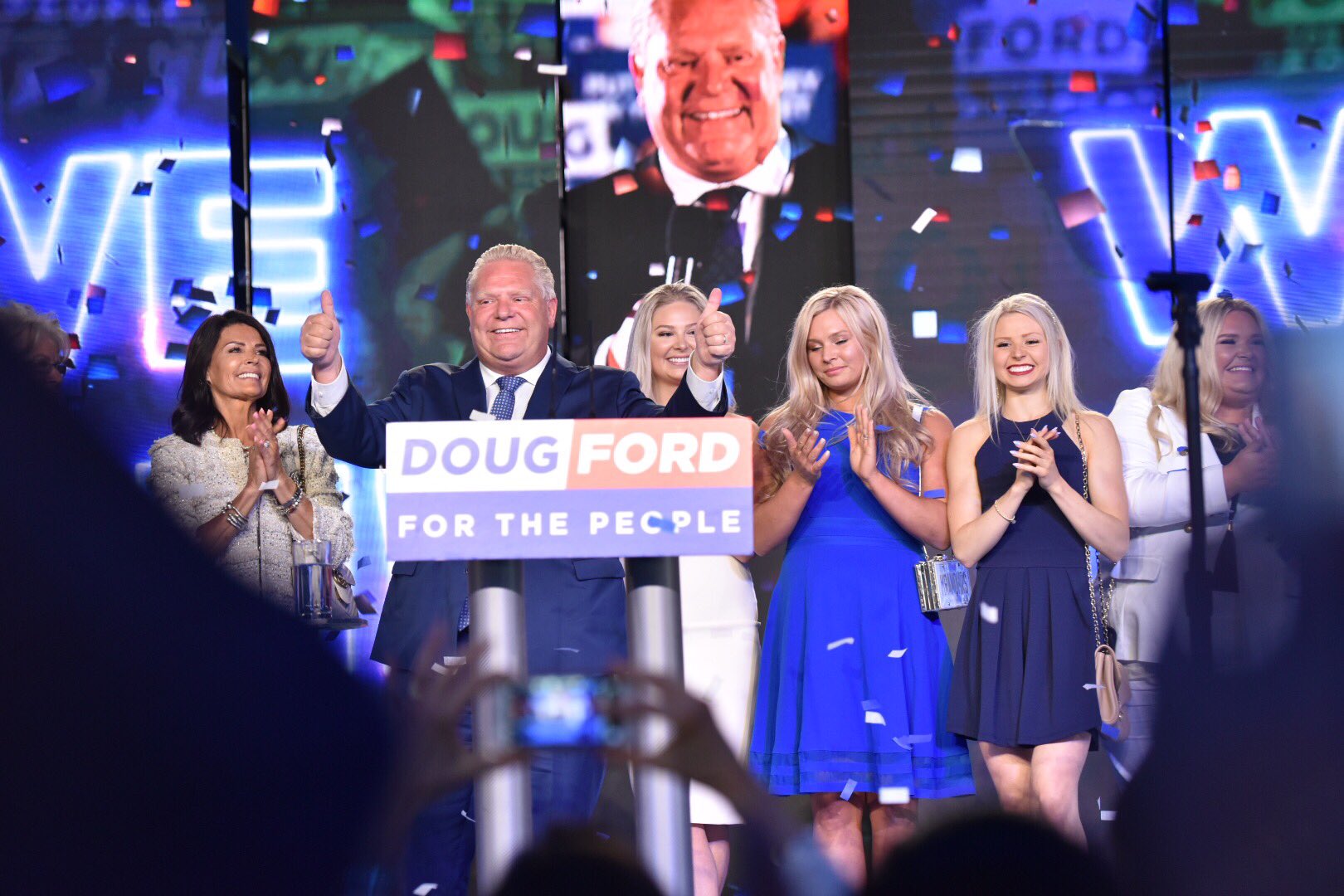 This is a collaborative article written by the Canadian Politics authors: Samuel Moir, Katherine Cuplinskas, and Catharina O’Donnell.

On September 10th, Ontario Premier Doug Ford announced his intention to proceed with the Better Local Government Act, also known as Bill 5. Earlier that day, the bill was struck down as unconstitutional by Ontario Justice Edward P. Belobaba. Using the Constitution’s notwithstanding clause, Ford aims to override the court’s decision and continue with his plans to reduce the size of Toronto City Council from its current 47 councillors to a mere 25.

Ford’s Progressive Conservative government was elected in June 2018 on a platform of “restoring responsibility, accountability, and trust.” Although Ford emphasized finding “inefficiencies” within government, his vague plan never mentioned cuts to Toronto’s city council. Despite this, Ford has made it clear that he intends to use every available measure to pass the Better Local Government Act.

Several legal challenges were initiated soon after the tabling of the bill, with one from the City of Toronto reaching Ontario Superior Court Justice Belobaba. Belobaba ultimately ruled that introducing Bill 5 in the middle of the municipal elections “substantially interfered with […] the freedom of expression that is guaranteed under s. 2(b) of the Charter of Rights,” because it caused chaos and confusion which detracted from the key political issues of the campaign. This ruling prompted Premier Ford to announce that he would use the notwithstanding clause to override the court’s decision.

The notwithstanding clause was introduced into the Canadian Constitution in 1982 as Section 33. Under its provisions, a federal or provincial government may legally infringe on certain specified constitutional rights contained in Section 2 and Sections 7-15.  These rights include fundamental freedoms, legal rights, and equality rights. In order to do so, the government must pass an Act declaring that the law will be in effect despite its violation of the Charter. Importantly, this Act must be renewed every five years.

Due to its controversial ability to override the Charter and court decisions, the notwithstanding clause has been used sparingly by politicians. Since its introduction in 1982, the clause has been invoked approximately 15 times; the most famous of which was by the Quebec government on the issue of minority language rights. Politicians at all levels of government are wary of the immense political costs associated with the clause’s enactment. In many cases, the use of Section 33  risks being perceived as a government valuing its power over the fundamental rights and freedoms of its citizens.

Although Ford is technically eligible to invoke the notwithstanding clause, using it for the first time in the province’s history to push through a controversial bill is likely to carry serious political consequences. Ford’s plan to reduce the number of Toronto city councillors from 47 to 25 was heavily criticized for being arbitrary and for causing undue confusion in the middle of Toronto’s municipal election period. While the act of downsizing the council itself has both supporters and opponents, using the clause in an unprecedented manner to violate constitutional rights is unlikely to boost Ford’s popularity. Ford’s move is especially flawed in that it impacts residents of the Greater Toronto Area, many of which voted for Ford in June.

Beyond upsetting voters, Ford’s rushed decision could further damage the relationship between the City of Toronto and Ford’s government. One City Councillor called Ford’s threat to invoke the clause “terrifying” and reminiscent of a “dictator,” while another dubbed it a “nuclear attack” on Toronto. Considering the interconnected nature of municipal and provincial policy, especially on timely issues like handling asylum seekers and mitigating effects of a growing trade war with the US, making enemies with Toronto should not be high on Ford’s to-do list.

Regardless of the merits or drawbacks of reducing city council, it is clear that overriding a court decision and forcing drastic changes in the middle of an election has already created chaos. Interestingly, Belaboba’s court ruling did not find that the act itself of reducing council was unconstitutional. Instead, he argued that the timing of the act created “widespread confusion and uncertainty” which left candidates unable to conduct their political campaigns in a way that allowed for free speech. It was ultimately the timing of the act, and not the act itself, which violated candidates’ rights to freedom of expression.

With this in mind, it is unfortunate that Ford declined to take the middle ground and simply appeal the decision or delay the passing of the bill. Had Ford chosen either of these options, he could have passed the act without creating further controversy through use of the notwithstanding clause. Admittedly, this would likely have meant that the number of councillors could likely not be cut until Toronto’s next election, thereby delaying Ford’s elusive reduction of “inefficiencies.” While that option might not save Ford any money, it could have saved him from committing political suicide just three months into his mandate.

The controversial bill passed its first reading on Wednesday and is expected to pass subsequent votes with no issue, considering the Progressive Conservatives’ large majority in the Ontario Legislature. According to Government House Leader Todd Smith, the bill could come into effect as early as next week.

Ultimately, Ford’s use of the notwithstanding clause is both entirely constitutional and entirely unwise. While Ford appears steadfast in his belief that using the clause would represent a rightful assertion of a democratically elected government, such action could have political consequences beyond repair.