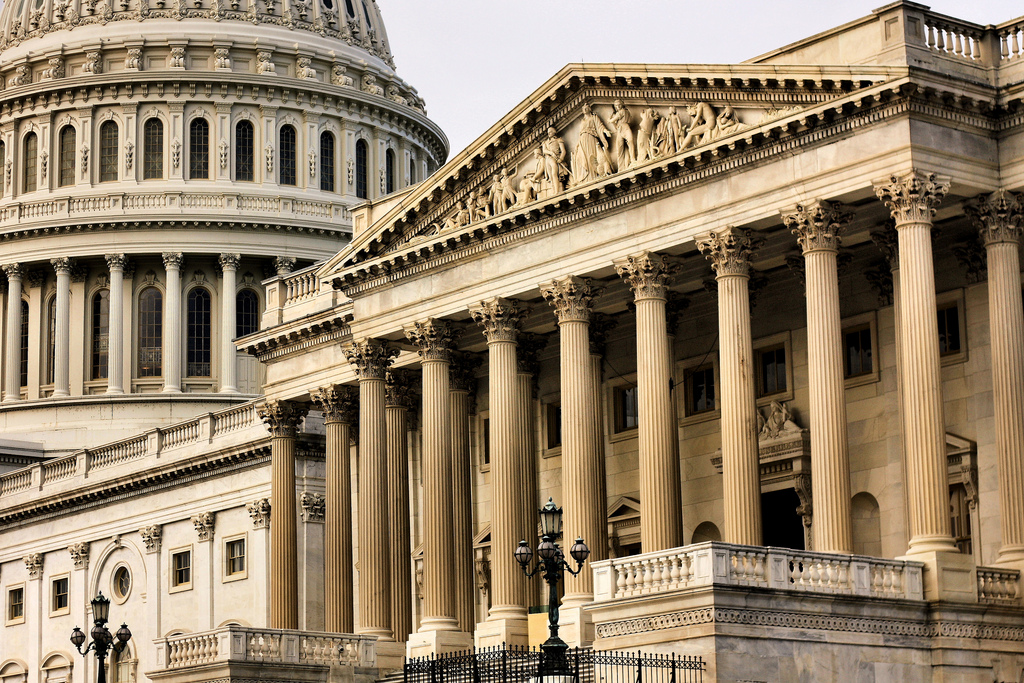 No matter which party wins, the US will soon hold a historic general election in which 36 governorships, 435 House seats, 33 US Senate seats, and all state legislatures will be up for grabs. With growing left-wing voter enthusiasm, 2018 increasingly appears to bring a “Democratic wave.” Following intense Republican gerrymandering following the 2010 Census, the US House of Representatives appears to be competitive for the first time in eight years. However, a red wall is likely to stop the blue wave in its tracks: a Republican Senate.

The Senate map currently favours a Republican majority, with the Democrats being forced to defend 10 incumbents in states that President Trump won. In addition, the “Kavanaugh effect” placed some previously leading Democratic Senate candidates behind their Republican opponents. If election predictions pan out, the 116th US Congress will be a divided one. One possible scenario is outlined below.

According to current data, Democrats are virtually guaranteed control of the US House for the first time since 2010. The federal government has since been plagued by policy paralysis, with a divided Congress and Democratic president unable to come to a compromise. This continued into 2017, with the newly elected Republican government perpetually sparring over it’s major initiatives.

These constituted little beyond an unpopular and unsuccessful Obamacare repeal bill and a tax cut that was seen as non-beneficial by the vast majority of American voters. A potential Democratic majority will take office against the backdrop of an unpopular outgoing Republican House.

This does not guarantee success in 2020. Democrats should bear in mind the 2010 midterm elections in which the Republicans won 60 House seats while Democrats retained a 53-47 Senate majority. Swept into power by discontent with President Obama’s unpopular healthcare law and a weak economy, House Republicans allowed opposition to Obama’s policies define their legislative agenda. The new Republican majority spent its time squabbling with the Obama administration about Obamacare and the federal debt, thinking its jaw-dropping turnout 2010 would preface a 2012 Republican landslide. It did not.

President Obama was re-elected, the Republican House majority shrunk, and the Democrats expanded their Senate majority. This is why the Democratic Party must present a tangible agenda beyond its opposition to Trump if it hopes to convince voters that Democrats can govern. Mindful of this, Democrats are gearing up to pass a slew of ambitious legislation, understanding that each and every one will fail in a Republican Senate. Although Democrats will struggle with divides over polarizing issues like transgender rights, abolishing ICE, and Medicare for All, it is very likely that the party’s caucus will coalesce around issues on which there is consensus.

One such issue is healthcare. Democrats in competitive districts are using Obamacare’s increased popularity to accuse their Republican opponents of ripping away healthcare access for the poor. With Senator Sanders’ single payer proposal pushing the Democratic healthcare debate to the left, it is probable that a Democratic majority will pass a “public option” as a part of a package to stabilize the Obamacare exchanges in which low income Americans can purchase subsidized private insurance. Under this proposal, the US government would either allow citizens to “buy into” Medicare by paying monthly premiums, or operate a state-owned nonprofit health insurance company that would sell coverage on the exchanges.

A public option is often seen as cheaper for consumers because it lacks a profit incentive, would not pay bloated executive salaries, and can use the weight of the federal government to negotiate favorable terms with healthcare providers and pharmaceutical companies. This alternative was considered too liberal by Senators to be included in the final iteration of Obamacare, and its omission incensed House Democrats in 2010. This perception has faded away, with many of the most conservative Democratic candidates campaigning on a public option.

There are other issues beyond healthcare that are consistent with the theme of “kitchen table” issues. A Democratic House is likely pass a substantial increase of the federal minimum wage that currently stands at $7.25 an hour. It is not clear if there will be enough votes for a 15 dollar minimum wage, but the party will most likely pass at least a 12 or 13 dollar wage for which there is universal support, to project a united front against income inequality.

Finally, another popular proposal is some sort of tax reform. This could be implemented by either expanding the earned income tax credit to give poor and middle-class families more money to spend, or by repealing the Republican tax cuts for the wealthy and redirecting the new tax revenue to working class initiatives. All of these proposals are popular and non-polarizing. Their passage will help Democrats reverse the defections of working class workers in 2016.

However, these policies stand no chance of passing a Republican Senate. This means a continuation of the current legislative gridlock well into 2020. The Republican Party vehemently opposed a public option in the 111th Congress and will no doubt do so again. They also rejected an Obama-era proposal to raise the minimum wage to $10.10 an hour. Lastly, the Republicans will be anything but willing to undo their signature accomplishment to pay for middle class tax credits. In addition to this, the filibuster continues to complicate policy making in Washington, with non budgetary matters requiring a supermajority of 60 Senators for passage.

With a Democratic House likely intent on passing its own policies, grand bipartisan compromises on healthcare and taxes are unlikely. Rather, the increasingly common phenomenon of government shutdowns will likely continue with a Democratic house, complicating the authorization of basic federal spending. However, this does not mean the Senate will sit idle. Facing policy paralysis in the elected branches, both parties have increasingly relied on the judiciary to score policy wins.

Senate majority leader Mitch McConnell has made stacking the federal courts with conservative judges a major priority, which will no doubt continue with a Republican majority. By delaying the confirmation of Obama appointees and fast-tracking the confirmation of Trump’s picks, McConnell has filled one-eighth of the entire federal judiciary with Trump appointees. And with Ruth Bader Ginsburg turning 86 next year, it is possible that President Trump will have a loyal Senate majority to count on to confirm another nominee to the Supreme Court.

There does seem to be a few areas in which a Democratic House and Republican Senate can work together to pass meaningful legislation: drug prices and trade. Donald Trump bucked decades of conservative orthodoxy by endorsing controls to prescription drug prices and protectionist trade policies. The USMCA contains provisions that will most likely boost domestic automobile manufacturing as well as reducing tariffs on American dairy entering the Canadian market. This makes the re-worked trade deal appealing to both progressive Democrats promising a manufacturing renaissance as well as establishment free-traders in both parties. Thus, the USMCA will most likely be ratified by Congress through such a coalition.

In addition to USCMA, Democrats who bemoan high drug prices may join forces with populist Republican Senators to pass some moderate legislation through a Republican Senate. Bernie Sanders’ proposal to import cheaper, identical drugs from Canada holds surprisingly strong Republican support. President Trump has stated he would be open to Medicare negotiating drug prices, indicating that this policy could become law with bipartisan support. This would deliver a clear win for House Democrats hoping to pass strong healthcare bills while allowing Trump to fulfill a key campaign promise that he has so far left on the back burner.

Although these areas retain potential for policymaking cooperation, bipartisan productivity in the new Congress will nonetheless be low, with a Democratic House determined to pass progressive bills and a Republican Senate intent on blocking them. The coming two years will be a trial run for Democratic Party, and it remains to be seen if they can convince the American people to choose them come 2020.