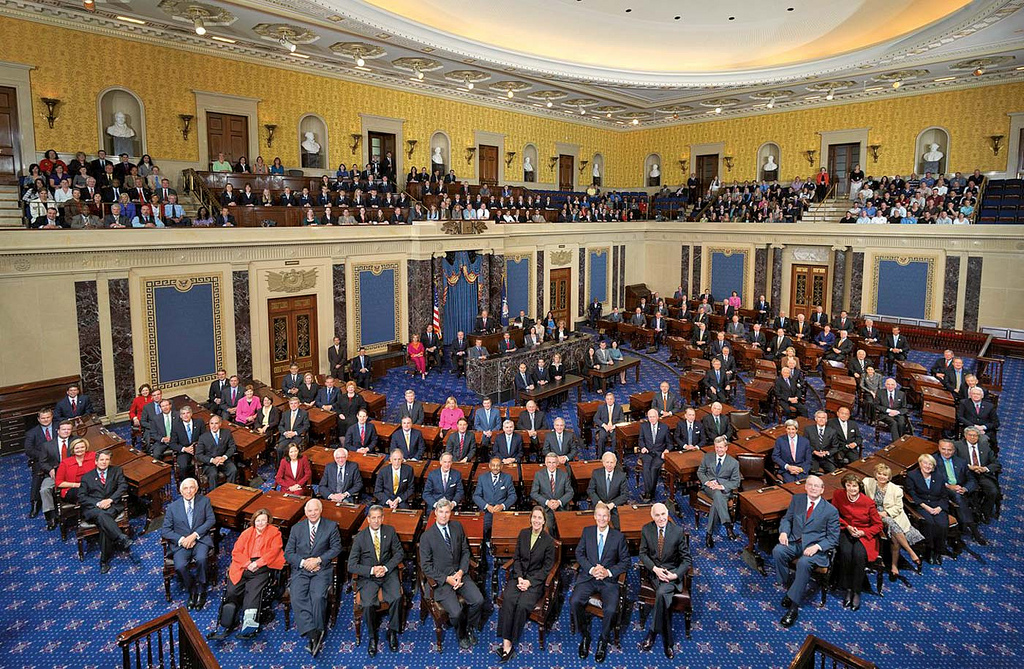 Policy approaches toward fairness present themselves in a variety of ways. Some policies value equal contribution and devalue circumstantial differences; others value circumstantial differences and devalue equal contribution. Since neither strategies guarantee just outcomes, they can create unintended consequences that act contrary to their initial goals. Senate apportionment in the United States demonstrates this discrepancy. Polls and predicted outcomes in the upcoming midterm elections demonstrate that these elections can potentially exacerbate the inequality of representation of citizens in the Senate. The midterm elections can act as catalysts for such complications in policy, as voters with disproportionate influence can re-shape the relative representation of individual opinion.

Senate apportionment was an outcome of the set of negotiations known as the Great Compromise of 1787. Negotiators in Delaware and New York advocated for an equal number of votes for all states because they wanted equal representation in order to stand up to newly-expanding Southern states. In contrast, Southern states argued for proportional representation, with one representative per fixed number of citizens in the state. These opposing strategies resulted in a proportionally-representative House and equally-representative Senate, as laid out in Article I, Section 3 of the United States Constitution. Two senators per state are to be elected to the Senate, with each Senator receiving one vote. [i]

A consequence of this decision was that, given the variation in state population and geographical size, Senators represent a different number of voters in each state. Senators in sparsely-populated areas represent fewer people when voting about policy, but are given the same value to their vote. In light of this disparity in relative representation, the views of individuals in states with a lower population density would be institutionally overrepresented by their Senators. Depending on the similitude of voting patterns, policies could potentially favour political views of citizens in states with lower population densities. [ii]

Unequal relative representation in the Senate demonstrates that neither equal nor equitable policy approaches are completely suitable to establish fair outcomes. Equal policy determines actors as equal in status and uses this premise as the basis for all participants deserving the same degree of aid. In government policy, the Fifth and Fourteenth Amendment are examples of equality that established equal national and state protection of citizens before the law, respectively. While this may promote fairness superficially, a study featured by the University of Chicago Law School notes that declaring all citizens as equal can heighten the standards with which judges use to identify discrimination, thus portraying differences as inherent and precedent of systemic inequality. [iii]

In contrast, equitable policy assesses need based on individual circumstance, in an attempt to provide each participant with the same opportunity to achieve favourable outcomes. In this case, an example of equity in government policy is graduated income tax, as it determines the degree of taxation in relation to one’s economic status. Although this policy allows the government to impose demands on its citizens based on their economic capacity, which is often not entirely within citizens’ control, this comes at the expense of subjecting poorer and more affluent citizens unequally to the law.

Since none of these strategies explicitly establish fairness, conflict can arise when deciding which strategy to adopt. By adopting an equal strategy in the Senate, states received equal representation and opportunity to contribute. However, ignoring state differences could leave certain states at an advantage. Despite this strategy’s flaws, it is not guaranteed that an equitable strategy would have been more suitable.

With a method such as proportional representation, states would receive differing degrees of help based on their varying circumstances. However, with no mechanism to equalize players, the extreme diversity in state population densities leaves the potential for an abuse of power by more densely-populated states. Although equity can recognize variation to a greater degree, proportional representation does not necessarily prevent domination of certain states. In short, vulnerability in each strategy can create unintended consequences that act opposite to what the policy strives to achieve. Senatorial policy that was meant to ensure each state to have equal say, did the opposite to its residents in practice.

While this rural advantage by itself is enough to cause concern, the midterm elections on November 6th have the potential to exacerbate relative inequality in the Senate, as voters in more rural states’ views are comparatively inflated by the two-senator rule. Not only do they determine which states have seats up for election, but also which party gets elected by voters with more relative power. In other words, since political parties represent the views of their voters, they can also be overrepresented by this rural bias.

The capacity for systemic overrepresentation of a particular party is increased when a majority of sparsely-populated states follow a similar voting pattern. Based on voting power percentage, or the probability that a single vote will determine the party in power, rural districts make up 46% of the most competitive races in the upcoming elections. On one hand, this suggests that races in the most overrepresented states also have the most unpredictable outcomes, so they are unlikely to follow a collective voting pattern that could lead to over representing a particular party. On the other hand, many of these rural states were previously secured by Trump in the 2016 Federal election, which could suggest an inclination to vote for Republican senators.

This previous propensity coincides with predicted outcomes based on polling across the country. As of October 31, Republicans have a 6 in 7 predicted chance of controlling the Senate. Such predictions can be partially attributed to the disproportionate number of Democratic seats up for election compared to Republican seats. Among the 35 Senate seats up for election, 27 are formerly Democrat and only 8 are formerly Republican.

One of the clearest examples of a vulnerable incumbency is North Dakota.  North Dakota, ranked the fifth-least populated state in a 2017 US census, houses some of the most overrepresented voters in this year’s election. This state, a strong supporter of the party, voted Republican in both the 2012 and 2016 federal elections. In addition to this red climate, Democratic incumbent Heidi Heitkamp’s opposition to Brett Kavanaugh’s Supreme Court nomination worsened her chances of gaining support from middle-ground Republican voters. As such, Republican candidate Kevin Cramer increasingly challenges the Democratic Senator’s incumbency.

It is not overwhelming Republican vote, but overwhelming rural Republican vote, that has the capacity to distort representation in the Senate. Similarly, those states predicted to re-elect Democratic incumbents, such as Pennsylvania, Ohio, and Michigan, are also some of the most densely-populated states in the country, ranked 10th, 11th, and 19th, respectively. In other words, the states most likely to re-elect Democratic incumbents are also some of the most underrepresented, which merely adds to the disparity in ideological representation.

Apportionment in the Senate acts as a case study in examining the discrepancy between both equality and equity, and theory and practice. The two-senator rule demonstrates that policy using theoretical measures of equality can recognize actors as equal in standing, yet in practice ignore variation in said actors that foster inequality, regardless of such declarations. In contrast, while policy using measures of equity can recognize this variation, it can fall short in ensuring non-domination. Although such strategies have a degree of usefulness, unintended consequences that arise in practice can act contrary to the initial theoretical goal.

Feature image by the US Senate via Flickr Creative Commons.