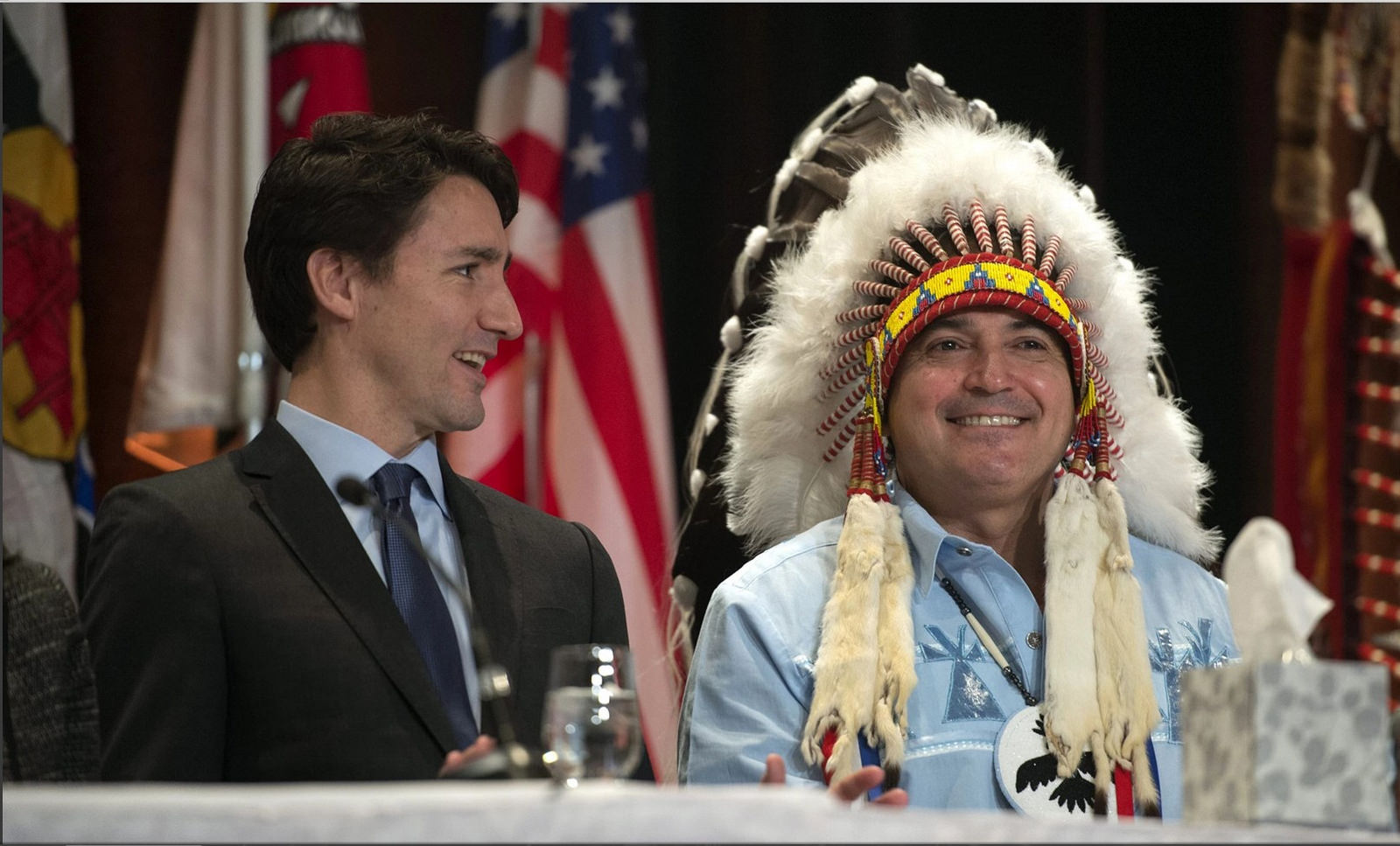 Since the first European settlers arrived in 1534, Crown-Indigenous relations have been tumultuous. Marked by centuries of colonialism, imperialism and forced assimilation, the relationship has been tense at its best. Only in recent decades has the Government of Canada engaged in reconciliation efforts. Aboriginal and treaty rights received formal constitutional recognition in 1982, and in 2008, an official apology for the residential school system was delivered to the House of Commons. This led the Truth and Reconciliation Commission to be consequently established. An independent National Inquiry into the Missing and Murdered Indigenous Women was also launched in 2016. Despite these federal initiatives, however, Crown-Indigenous relations remain tense.

In 2015, Justin Trudeau came to power with what was widely regarded as an extremely pro-Indigenous message. In their electoral platform, the Liberals promised quality First Nations education, improved quality of life for the Métis nation, an immediate launch of a national inquiry into missing and murdered Indigenous women, and the fulfillment of all 90 recommendations from the Truth and Reconciliation Commission. In essence, Trudeau pledged to “renew the relationship between Canada and Indigenous Peoples.”

It has now been three years since the Liberals took office, and the question remains: what has been the impact of the Trudeau administration on Crown-Indigenous relations? Have they deepened or become estranged? With respect to Aboriginal rights, it is evident that tense historical legacies continue to affect the relationship. However, the Liberal government’s new legal framework demonstrates a successful effort to move beyond this tumultuous past, and strengthen relations between Canada and its Indigenous peoples.

The Changing Relationship Under Harper

Section 35 of the Canadian Constitution Act of 1982 recognizes and affirms existing Aboriginal and treaty rights. Despite this constitutional recognition, ensuring the true protection of Aboriginal and treaty rights continues to form a core part of Indigenous politics and activism. Many court cases and political mobilizations have surrounded pleas that these constitutionally guaranteed rights have not been upheld. This has pushed recent federal governments to attempt to reconcile these feelings of injustice. In particular, several efforts were made during the Stephen Harper era to satisfy Indigenous calls for action. Notably, the Conservative government delivered a historic official apology for the residential school system to the House of Commons in 2008.

Despite the inevitable rapprochement of Crown-Indigenous relations following the 2008 apology, the relationship also suffered setbacks with respect to rights under the Harper government. The Conservatives’ attempt to institutionalize Aboriginal and treaty rights, through First Nation control over education, was largely unsuccessful. In 2014, then-Prime Minister Stephen Harper announced that the federal government would allocate $1.9 billion to First Nations education. Despite that this was the result of backroom deals “between the [then]-governing Conservatives, chiefs and Assembly of First Nations (AFN) then-national chief Shawn Atleo,” the bill remained unpopular among several First Nations chiefs. Its divisiveness ultimately led to the resignation of Atleo as the AFN’s National Chief, as well as the overhaul of the bill.

When Trudeau came to power in 2015, he thus inherited a legacy of failed efforts to further institutionalize Aboriginal and treaty rights. There is no doubt that the ramifications of this historically tense relationship continue to present a setback to Crown-Indigenous relations. This can be seen when examining statements made by Opposition Members of Parliament, as well as the recent Supreme Court decision in Mikisew Cree Nation v. Canada (2018).

In September 2018, Indigenous NDP MP Romeo Saganash exclaimed during Question Period that the Prime Minister “doesn’t give a fuck” about Indigenous rights. Despite later apologizing for the use of unparliamentary language at the insistence of the Speaker of the House of Commons, Saganash maintains that the governing Liberals are “willfully [violating] their constitutional duties and obligations.” He primarily argues that they have failed to accommodate Indigenous interests with respect to the Trans Mountain pipeline expansion project. This outburst in the legislature showcases that the tumultuous historical legacies continue to influence how Indigenous groups perceive their relationship with the Crown.

The recent Mikisew Cree Nation v. Canada (2018) Supreme Court case further exemplifies the continued impact of these legacies of estrangement on Crown-Indigenous relations. Writing for the majority, Supreme Court Justice Karatkatsanis argues that the Canadian legislature has no “duty to consult with Indigenous people before introducing legislation that might affect constitutionally protected Indigenous and treaty rights.” Only when acting in its executive capacity could the government potentially be required to fulfill its duty to consult, as defined in the 2004 landmark case Haida Nation v. British Columbia (Minister of Forests).

The Mikisew Cree Nation v. Canada ruling ultimately posed another division in the relationship. While it was welcomed by the federal government which argued that the duty to consult would be too onerous when tabling legislation, Indigenous groups saw this is a major blow to the protection of their Aboriginal and treaty rights. The First Nations involved and the AFN’s Manitoba Regional Chief Kevin Hart have claimed that, regardless of the Court’s decision, Indigenous people will continue to defend and assert their rights in the legislative process. The aftermath of this judicial ruling thus highlights the continued dissonance between the perception of Indigenous rights by the Crown and by Indigenous groups.

Despite these ongoing legacies of tumultuous Crown-Indigenous relations, the Liberal administration has succeeded in some ways to deepen the government’s relationship with Indigenous peoples. In February 2018, Trudeau announced his government’s plan to introduce a new legal framework aimed at strengthening Crown-Indigenous relations. Historic broad-sweeping legislation will be tabled with respect to Aboriginal and treaty rights: the onus will no longer be on Indigenous groups to prove to the Courts that they have rights in need of protection. Instead, federal legislation will guarantee which rights fall under the parameters of Section 35.

According to the Liberal government, this will allow “Indigenous peoples to pursue greater self-determination, with the ultimate goal of addressing entrenched economic and social problems in Indigenous communities.” While there has been some pushback from experts on this new legal framework, it can nonetheless be seen as a step toward stronger Crown-Indigenous relations. Its significance is found in its removal of the onus placed on Indigenous communities to navigate the judicial system in order to define their rights. As explained by Justice Minister Jody Wilson-Raybould, this legislation will ensure “that Section 35 [of the Constitution] is a box full of rights to be filled up by First Nations, Metis and Inuit across the country.” Despite the legacies of tumultuous relations, this new legal framework proposed by the Trudeau administration is a clear example of rapprochement in the relationship between the Crown and Indigenous peoples.

Tumultuous historical legacies continue to impact Crown-Indigenous relations, as demonstrated by MP Romeo Saganash’s recent comments about the governing Liberals, and the diverging reactions to the recent Supreme Court ruling in Mikisew Cree Nation v. Canada (2018). Justin Trudeau’s Liberals have however inched toward rapprochement with their recent announcement of a new legal framework surrounding Aboriginal and treaty rights. While far from negating the historical tensions that continue to paint the relationship, it demonstrates that the Trudeau administration has somewhat succeeded in its goal of deepening Crown-Indigenous relations. Although many different facets exist to Crown-Indigenous relations, examining this relationship through the lens of Aboriginal and treaty rights highlights both the successes of recent governments and the challenges that remain.