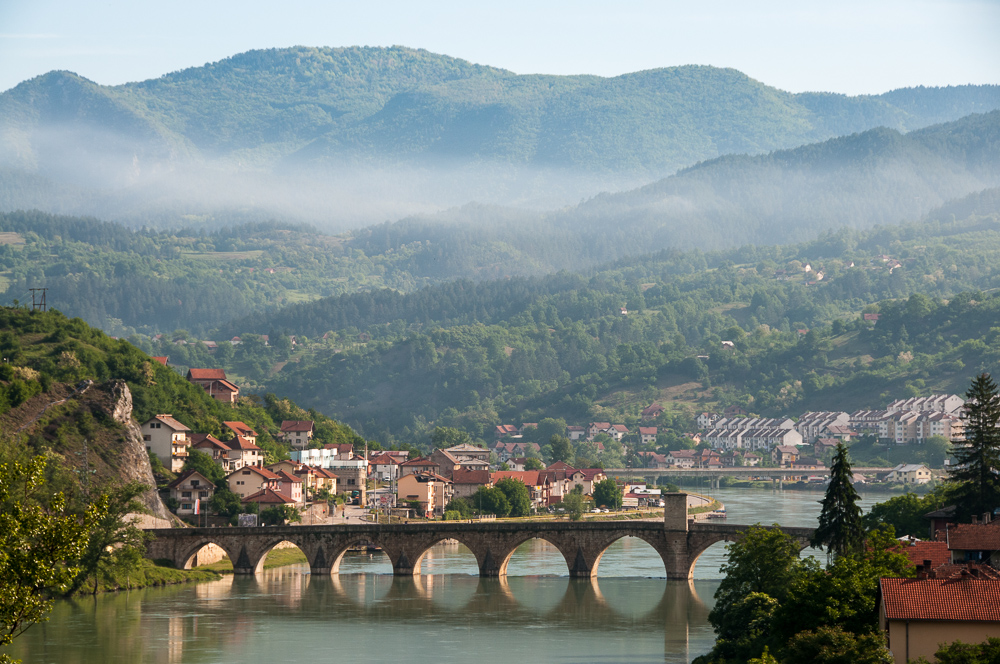 Supporters of the far-right and ultra-nationalist Serbian Ravna Gora movement, also known as the Chetnik movement, have provoked local and international condemnation for gathering in the eastern Bosnian town of Višegrad on March 10.

The town was the site of an ethnic cleansing campaign against its Bosniak (Bosnian Muslim) community perpetrated by Serb forces sympathizing with the Chetnik movement in 1992. This campaign, also known as the Višegrad massacre, took the lives of around 3000 Bosniaks. It stands as a dark prelude to the Srebrenica massacre of 1995 in which more than 7000 Bosniaks were murdered and 20,000 were expelled.

The Bosnian genocide, carried out by Bosnian Serb forces, was motivated by aspirations for a so-called “Greater Serbia,” aspirations the Chetniks and other ultra-nationalist Serbs share to this day.

Supporters of the Chetnik movement gathered to hold a commemoration for the capture of their founder Dragoljub “Draža” Mihailović by Yugoslav troops in 1946, as they do every year. Although the Chetniks opposed the Axis occupation of Yugoslavia initially, after 1941 Mihailović and many Chetnik bands he formed eventually collaborated and made agreements with the Axis powers.

Mihailović’s forces committed atrocities and other war crimes throughout World War II targeting non-Serb populations and Tito’s Partisans. This occurred in an environment where the fascist Croatian Ustašhe party, which ruled the Independent State of Croatia during the Axis occupation, committed genocide between 1941-1945 against its Serb, Jewish, and Gypsy populations resulting in the deaths of hundreds of thousands.

After being captured, Mihailović was accused of collaboration with the Axis and convicted of high treason and war crimes by communist authorities in Belgrade. He was executed a few months later. The extent of Mihailović’s collaboration with the Axis powers remains controversial to this day. In 2015, Serbia’s supreme court rehabilitated Mihailović, stipulating that the 1946 trial that found him guilty and convicted was politically motivated.

The gathering of around 200 sympathizers of the Chetnik movement in a town haunted by their role in ethnic cleansing has instilled fear in the local population. The Chetnik supporters, holding Serbian flags and clad in dark uniforms similar to the ones worn during the 1992 massacre, chanted “there will be hell, the Drina will be bloody, here come the Chetniks from the Serb mountains.” This refers to massacres carried out by Serb forces in the early 1990’s, in which bodies of murdered Bosniaks were dumped in the river Drina, which runs through Višegrad.

Bosnian prime minister Denis Zvizdić condemned the rally, saying it brought back memories from the 1990s, “when Chetnik ideology, racism and hegemonism were the basis of the brutal aggression [in Bosnia]” which led to “mass war crimes committed against the non-Serb population and which culminated with the genocide in Srebrenica.”

However, Dusan Sladojevic, one of the organizers, defended the gathering and claimed Mihailović was a “man who dedicated his life to freeing the Serbian people, as well as the development of democracy and defending the homeland from fascist aggressors.”

The Balkans has continued to be a geopolitical battleground between NATO and Russian interests in the region, with NATO slowly expanding its membership. Slovenia joined the alliance in 2004, Albania and Croatia in 2009, and Montenegro in 2017. North Macedonia is set to join the treaty in 2019.

Clandestine Russian involvement in Montenegro and North Macedonia’s domestic politics attempted to thwart their accession to NATO. In Montenegro, Russian officials directed an attempted coup in 2016 to prevent it from joining the alliance. In North Macedonia, a Russian wave of targeted misinformation and propaganda campaigns were unleashed on North Macedonia and Greece, allegedly trying to incite nationalism in both countries.

This ultimately captures Moscow’s concern that NATO’s expansion destabilizes Europe and Russia’s security. Additional members to NATO would only increase its legitimacy as an international organization, and bolster it against Russia.

However, Moscow may find attempts to prevent Bosnia from joining NATO more successful due to its large Serbian community, who have a shared animosity towards NATO. This is because of NATO airstrikes on targets within Republika Srpska in 1995, a self proclaimed autonomous region in Bosnia established after ethnically cleansing its territories from Bosniaks. NATO also bombed Yugoslavia in 1999 (at the time Serbia, Montenegro, and Kosovo).

The interventions were carried out to prevent further destruction of Bosniak communities in Bosnia, and Albanian communities in Kosovo from encroaching Serb forces. In the process however, the bombings killed an estimated 2500 or more Serbian civilians and armed forces, the source of Serbian animosity towards the alliance.

The fact that Bosnia has an internal force that has made clear joining NATO is not in their interest increases the likelihood of a successful Russian intervention in destabilizing Bosnia’s ascendency. Dodik himself has stated, “thousands of bombs and deaths of Serbs in Republika Srpska and in Serbia can’t be forgotten… membership in NATO would represent humiliation for all Serbs.”

NATO expansion may reach an abrupt halt in the Balkans. After much of former Yugoslavia has or is on the path to joining NATO, Russia is sure to capitalize on ethnic tensions in Bosnia. Russian military interventions in South Ossetia and Abkhazia in Georgia, as well as Crimea in Ukraine stem from fears that these countries aspired to join NATO. Covert efforts have failed in North Macedonia and Montenegro, raising concerns that a more hostile and conspicuous intervention is now on the table.

Such an operation may increase the likelihood for success, especially if Moscow, the Chetniks and other ultra-nationalist Serbs, all seek to thwart Bosnia’s accession to NATO.