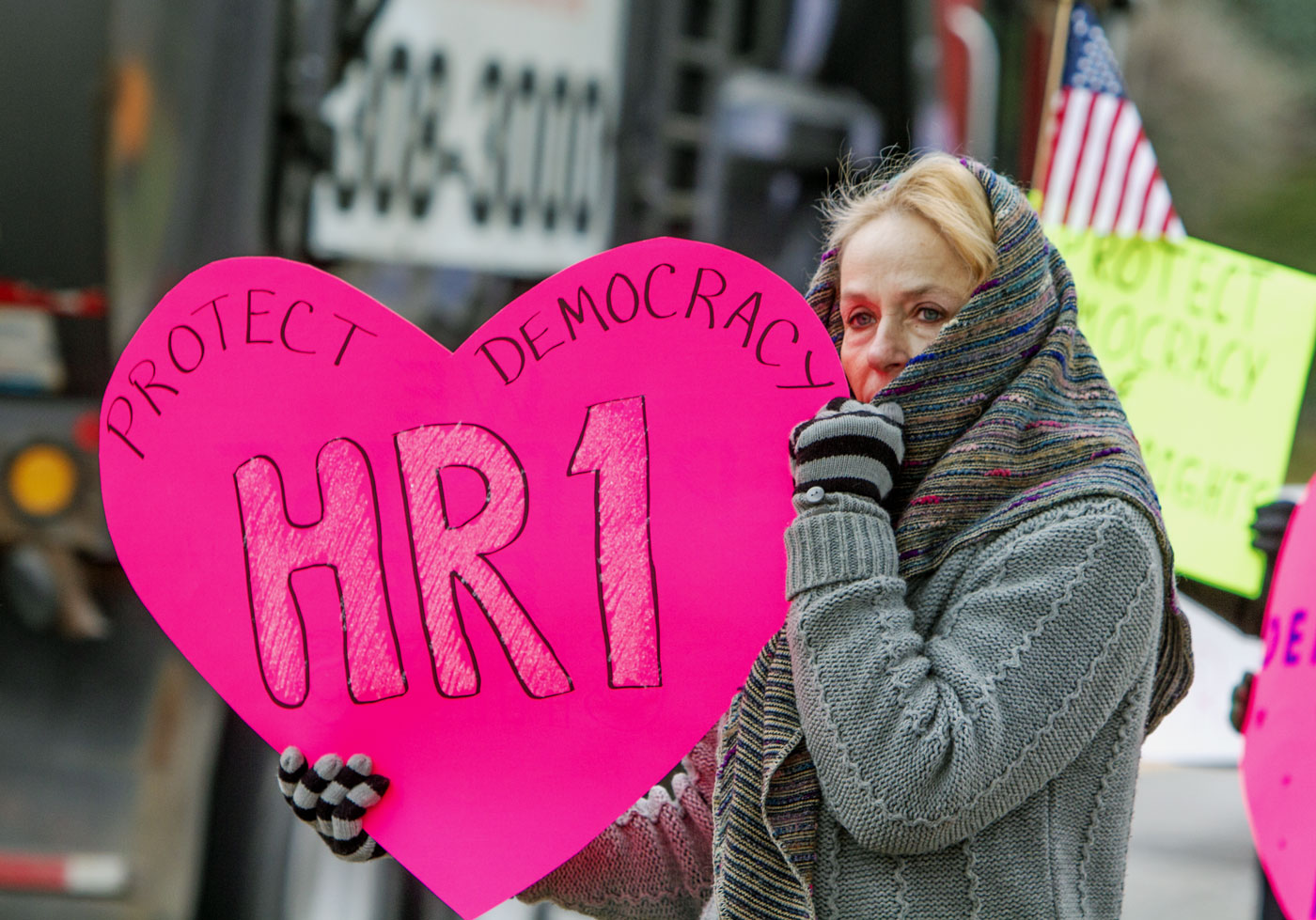 This month, the US House of Representatives passed HR1, the flagship legislative initiative of the new Democratic majority. Formally titled “For the People Act,” the bill passed on a party line vote and aims to overhaul the American electoral, voting and campaign finance laws. Similar to Newt Gingrich’s “Contract with America” agenda in 1994 and Democrats’ 100 hour plan in 2006, the bill consists of popular policies for which there is universal support in the new majority party.

By forcing Republicans to go on the record opposing it, the bill is the Democrats’ attempt to draw a contrast to the GOP and signal their priorities and principles in the run-up to the 2020 general election. Usually, these legislative initiatives attract extensive attention from the press and public alike. However, this bill garnered no such attention. HR1 received much less press coverage than any other flagship legislative program following a midterm election victory.

What Does The Bill Do?

The Republican Party has made it abundantly clear that HR1 will not pass in the near future. With the entire Republican leadership in Congress opposing the measure, and Senate Majority Leader Mitch McConnell dubbing it the “Democrat Politician Protection Act,” the bill is dead on arrival in the Republican Senate. Nonetheless, the American public should not let press silence or Republican opposition overshadow the importance of HR1. This bill is a historic proposal that would remove long standing inequities and corruption in the American electoral system.

HR1 addresses three main areas of election policy, the first being campaign finance. American election seasons are long, public election financing is scant, and the cost of running a campaign on the federal and state level constantly increases. For this reason, political candidates are forced to raise vast sums of money from private sources, including the super-rich. However, this is often insufficient, forcing candidates to take campaign contributions from large corporations.

This pervasive reliance on corporate campaign donations was exacerbated in 2010, when the US Supreme Court ruled that corporations are legal persons entitled to the first amendment right to donate unlimited amounts of money to politicians through Political Action Committees (PAC). These PACs are nominally independent, but are in practice aligned with a candidate and will fundraise, advertise, and campaign on the candidates behalf without revealing their funding sources.

This system has been denounced as corrupt by most Democrats and some Republicans like John McCain, as there is evidence that the receipt of corporate money can influence politicians to enact or vote for public policies according to/in accordance with the corporate interests that bankrolled their campaigns. While HR1 cannot overturn the 2010 Supreme Court decision without a constitutional amendment, it can significantly weaken the current system of “legalized bribery.”

In addition to requiring PACS to disclose the identities of their donors, the bill offers to match private small-dollar donations with federal dollars by a ratio of 1:6. This would remove the incentive or necessity for politicians to accept money from corporate America by expanding public election financing and increasing the viability of campaigns funded by small grassroots donations.

The second major area addressed by the bill is governmental ethics. In a clear swipe at Donald Trump, the bill would require all presidential candidates to release their previous ten years of tax returns. This is intended to preclude the future election of a President with the conflicts of interest and tax avoidance concerns similar to that of Donald Trump.

In response to the wave of “Me Too” allegations and congressional sexual assault scandals, HR1 would also ban the use of taxpayer money by politicians accused of sexual crimes to settle harassment claims against them. Also, seemingly in response to the controversial confirmation process of Brett Kavanaugh, HR1 would establish an official code of ethics for Supreme Court Justices (although the constitutionality of this provision is unclear).

The third area addressed by the bill is voting rights and election fairness. Democrats have made it clear that they are tired of what they consider to be blatant attempts by Republicans to depress voter turnout and disenfranchise Democratic-leaning young and minority voters.

HR1 brings this frustration into law by mandating that all eligible US citizens be automatically enrolled in a nationwide voter registration database, removing common obstacles to voting such as voter roll purges and arcane registration processes. It would also expand practical access to the ballot box by making election day a federal holiday.

Perhaps one of the most significant reforms enshrined in the bill is its crackdown on gerrymandering, a practice in which a political party draws legislative districts in a way that nearly guarantees its victory regardless of how many voters support the other party. Often compared to election rigging, Democrats have been on its receiving end since 2010, when Republicans gerrymandered congressional district lines after taking control of numerous state governments.

HR1 would rectify this problem by redirecting redistricting control away from partisan state legislatures and into the hands of independent redistricting commissions, removing the prospect of a party artificially creating a permanent majority.

The For the People Act is significant for a number of reasons. From a public policy standpoint, it is a sweeping overhaul of the federal elections process and will most likely be one of the first orders of business in a future Democratic trifecta in Washington. Although it is currently overshadowed by the Michael Cohen circus and recently released Mueller report, the bill and its contents will gain increasing attention as the 2020 election cycle begins. The policies within HR1 have become a litmus test for aspiring Democratic presidential candidates, especially for those eager to display their progressive policy credentials.

From a political standpoint, this bill is an electoral boon for the Democrats. The battle for the Senate and the White House in 2020 will likely be close, and may depend on which party succeeds in turning out its base. Assuming Democrats campaign on the passage of HR1, they will be poised to the energize their base by uniting activist opponents of racialized voter suppression and traditional liberals opposed to corporate money in America’s political system.

Additionally, unlike many other divisive and controversial progressive proposals, HR1’s provisions enjoy the support of large majorities of Americans. The bill has the ability to put the GOP on the defensive, forcing them to argue against popular anti-corruption measures just four years after winning on a pledge to “drain the swamp.”

It is difficult to argue with the idea that voting should be easy and accessible to all US citizens. For this reason, Republicans have struggled to find substantive reasons to oppose the bill beyond claims that the measure amounts to a “power grab.” When asked why the Senate will not be considering HR1, Majority Leader Mitch McConnell declined to provide a reason, simply stating: “because I get to decide what we vote on.”

Ultimately, becoming the anti-corruption party will serve Democrats well. Although Donald Trump vaguely promised to end corruption Washington corruption, numerous ethics scandals combined with an unpopular legislative agenda that included tax cuts for the rich and raising taxes on the middle class has weakened his anti-corruption mandate. By talking incessantly about clean governance and presenting a clear policy roadmap of how to get there, Democrats could win back some disappointed Obama-Trump voters as well as voters who believed Hillary Clinton’s email scandal was indicative of a corrupt political career. Finally, HR1 could also help Democrats appeal to the large number of Americans who routinely stay home, by prompting them to question their belief that the system is rotten and their vote does not matter.

Politics aside, For the People Act (HR1) would constitute the most significant crackdown on corruption and affirmation of voting rights since the civil rights era. Republican opposition may sound the death knell for the party’s chances in 2020.