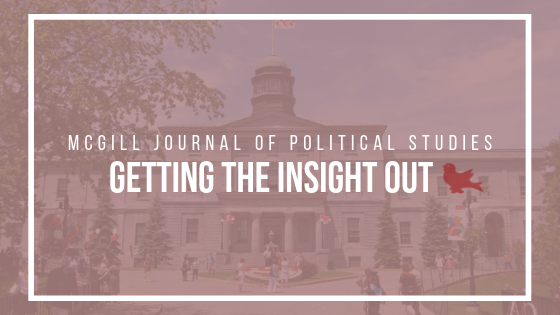 The McGill Journal of Political Studies (Online) is now hiring for multiple positions. We are seeking committed, talented students to join our close-knit team of McGill’s best political analysts. Apply by September 16th, 2019 at the following links:

MJPS is the publication of the Political Science Students’ Association, McGill’s undergraduate political science society. The Print edition of the journal publishes a collection of excellent undergraduate papers once per year, while the Online edition publishes daily political analysis meant for a general educated audience.

We publish articles across four streams: Canadian Politics, Comparative Politics, International Relations, and Political Theory. Below are descriptions of each section:

International Relations: politics between countries and at the level of international organizations

Comparative Politics: domestic politics of countries outside Canada, employing a comparative lens between countries where useful

Political Theory: thoughtful analysis of political philosophy and political theory, including its application to current and historical events

The MJPS Online is different from other online publications at McGill and elsewhere. We have carefully developed an organizational structure that produces political analysis of the highest caliber while making MJPS an extremely rewarding team to be part of.

Our team is made up of only the most promising writers and editors. In fact, all sections are capped at just 8 writers. This makes for not only an exceptionally talented team, but also one where each member is personally valued and feels part of a close-knit community.

Writers at MJPS choose their own topics and are never forced to write on pre-made pitches. We also provide the opportunity to write in a variety of formats, including opinion pieces, rapid analysis, and long-form explainers. Editors have substantial freedom in their leadership and editing practices and are also made a meaningful part of discussions around MJPS Online’s direction.

While writers are not required to pursue breaking analysis pieces, our team is highly experienced in this and is the only publication on McGill’s campus to consistently produce same-day and next-day analysis of breaking political events in Canada and around the world.

Our capacity to publish breaking analysis pieces allows MJPS staff to capitalize on higher interest in a topic and therefore increased attention to the work of MJPS writers and editors.

We are currently hiring for the following positions:

Staff Writer: Staff writers are the backbone of MJPS, producing political analysis and opinion for their assigned section. Writers must write one article every two weeks by their assigned draft deadline. Apply here.

Managing Editor: The new managing editor will join our existing managing editor to help lead the entire staff. They will be specifically responsible for two of the four sections, to be determined based on the two managing editors’ interests. Apply here.

For questions or concerns, please email Catharina O’Donnell at eicmjps@gmail.com.