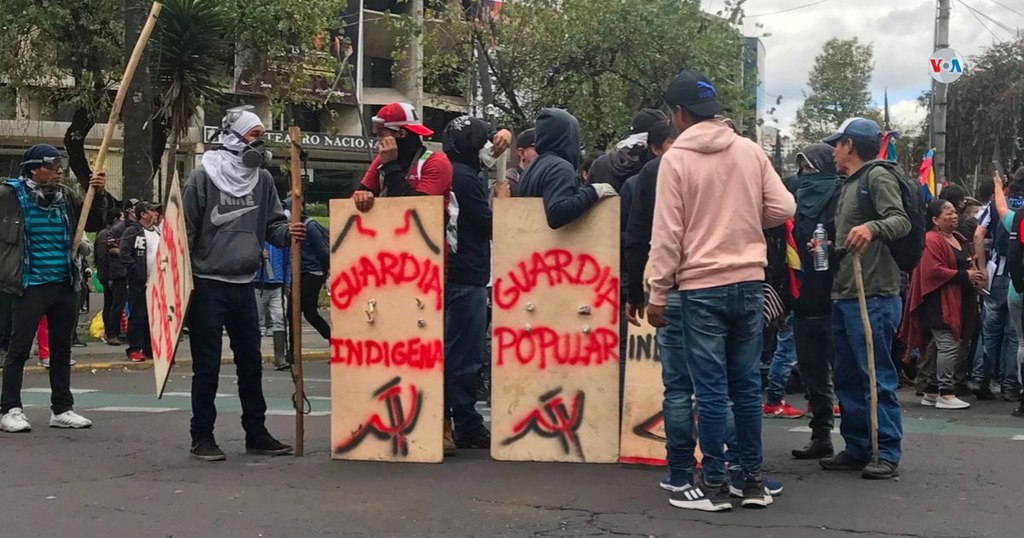 Ecuador has reached a resolution to a political crisis after 12 days of protests in the capital, Quito. The crisis started on October 1st, after the administration of Lenin Moreno, President of Ecuador since 2017, announced Decree 883, which eliminated the government’s national subsidy on fuels.

Immediately, representatives of transportation unions announced a series of protests in Quito as a response to the policy. Soon after, the main representatives of Ecuador’s Indigenous community called for a massive march on October 9th in the capital.

The government has subsidized fuels since the last 40 years. After Decree 883, the prices of diesel and higher-octane petrol increased from $1.04 to $2.07 and from $1.85 to $2.39, respectively. This increase in prices particularly affected Ecuador’s rural Indigenous communities, which depend heavily on transport costs to sell their products. Leonidas Iza, an Indigenous leader of the population of Cotopaxi, criticized the policy as placing the burden of economic adjustment on the poor.

As a response to the increasing violence in the city, President Moreno declared a State of Exception on October 3rd and officially moved the seat of government to Guayaquil, Ecuador’s largest city, on October 7th. Following a live dialogue between Moreno’s administration and the main representatives of Ecuador’s Indigenous community, an agreement to derogate Decree 883 and negotiate a substitute was reached on October 13th.

Regardless of the substantial merit of Decree 883, it is safe to say that it was put into effect in a unilateral manner and that the subsequent crisis represents the potential negative effects of implementing public policy without the consensus and consultation of the relevant actors in society, such as the transportation sector and the Indigenous communities.

This is not the first time in which Indigenous communities have played a central role in protesting against the government and threatened to end the administration of any particular president. In 1997, these groups were key players in the protests that led to the resignation of President Abdala Bucaram. The same can be said about the overthrow of President Jamil Mahuad in 2000 and President Lucio Gutiérrez in 2005.

The fact that Moreno relocated the government two days before the demonstrators arrived in Quito indicates that he was well aware of the potential threat that the protestors presented to his office. “Most of them were coming for me,” said Moreno, referring to the Indigenous march, in an interview with the BBC. In the same interview, he also accused former president Rafael Correa and Venezuelan President Nicolas Maduro of instigating the violence seen in the march in an attempt to overthrow him.

Several other factors also indicate that Moreno’s administration was prepared early on to stand its ground rather than engage in meaningful dialogue. The unilateral manner in which the decree was implemented increased the political cost of backing down on the policy, making it difficult to present a credible commitment to change its position. Furthermore, early on, Moreno reached a bilateral fare-hike agreement with the transportation unions, effectively dividing the opposition.

The government clearly miscalculated the ability of Indigenous groups to increase the political and economic costs of refusing to derogate the decree by underestimating the Indigenous response to a call for collective action, its resilience and its sense of cohesion. The protests caused the closing of main avenues, resulting in food and gas shortages across the nation, and forcing several oil fields and pipelines to shut down.

This analysis raises an interesting question regarding the desirability of consensus before the implementation of public policy. On one hand, a minimum amount of dialogue and transparency is necessary in a democratic context. On the other hand, any government measure will create winners and losers.

That being the case, putting it into effect, facing the potential political cost, and then seeking some middle ground might well be a legitimate strategy. This is true especially since already having implemented the policy gives the government some leverage in future negotiations.

In terms of the effectiveness, the crisis shows that failing to include at least the main Indigenous organizations was a mistake. As the resolution to the crisis involved the derogation of Decree 883, Moreno’s administration lost any potential leverage that it might have otherwise achieved.

While an agreement to back down on the previous policy was reached, negotiations on the policy that would substitute it are just beginning. Hopefully, these will result in a peaceful agreement and ideally expand to even more relevant sectors of the Ecuadorian society encompassing both public and private actors.