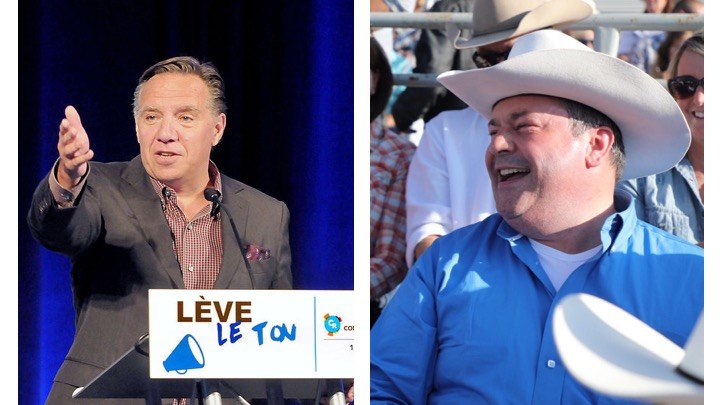 For many young Canadians, the Wexit movement – which advocates for Albertan sovereignty – seems new, especially when contrasted to the well-known Québec separatist movement. However, a quick GoogleTrends analysis shows that Wexit was also a headliner back in 2004, when Paul Martin formed a Liberal minority government and Western Canada was largely blue.

Despite prevailing notions that the growing strength of two separatist movements foretell doomsday for the federation, at their core, the two movements challenge different elements of what it means to be part of Canada. Wexit has no legal claim to self-determination: it is rooted in dissatisfaction with the performance of Alberta’s economy. By contrast, Québec separatism is based on a claim to nationhood and challenges the idea that Canada is a compact of nations. [1]

Sovereignty and Québec: From New France to Provincial Rights

Québec’s nationhood stems from its roots as a French colony which actually preceded English settlement on the continent. The distinct culture of Québec proved to be a challenge after it came under British rule in 1763. This led to the adoption of the Québec Act (1774) which gave the colony greater independence. Tensions between Québec and the other British colonies were also central in negotiating what would become the British North America Act – Canada’s constitution.

Since confederation, the province has brought a number of legal and political challenges including the October Crisis in 1970, a separation referendum in 1980, and the creation of the Bloc Québécois in the spring of 1990. The seriousness of the movement is also evinced by the Secession Reference of 1998 in which the Supreme Court outlined the steps required for Québec to separate from Canada.

While some sovereignists claim the movement is not steeped in racism, the Charter of Values proposed under premier Pauline Marois and more recently, Legault’s Bill 21, suggest their claim to self-determination comes from the idea that the Québecois are a distinct group that cannot reconcile their identity within Canadian multiculturalism.

Alberta: The Frontier Economy and the Lowest Taxes in Canada

Alberta was a latecomer to the federation, becoming a province in 1905. After the land was bought by the Dominion of Canada, the numbered treaties were negotiated with First Nations, and Alberta was settled by immigrants in the 1870s. Dissatisfaction with the federal government emerged during the Great Depression when Alberta elected the Social Credit party in provincial elections. Ironically, the Wexit party mirrors the Social Credit party in its aims to create a new currency for the province.

Alberta’s early days as the frontier of Canada and its dependence on the production of primary resources have not changed in the past century. Critics suggest that the Wexit platform is steeped in discourse that evokes the frontier vision of Alberta which largely excludes women and people of colour. Among other policies, the party would like to end bias against men in family court and protect the rights of parents in educating children about sexuality and religion.

Despite claims that the party would assist First Nations in getting compensation from the Federal Government, Marlene Poitras, the regional chief for the Albertan Assembly of First Nations, argues “racism swirls around the idea of Western separation” and is often directed at Indigenous individuals.

In contrast to Québec, Alberta does not have a history of trying to roll back federal powers in favour of provincial autonomy. The provincial government in Alberta also boasts the lowest tax rate in Canada and has no provincial sales tax. Alberta’s trend towards becoming a rentier state was raised by Laurie Adkins, associate professor at the University of Alberta, who recently edited a book on petro-politics in the province. Of chief concern is the tendency for such states to lose capacity to tax and to become less accountable. [2]

Alberta and Québec: Will Provincial Dissatisfaction Really Threaten the Federation?

Perhaps the most obvious critique of Wexit is the fact that the province is landlocked. To export oil anywhere other than the rest of Canada or the United States, it would need permission from provinces through which any pipeline would pass. The newly minted Wexit party also proposes an end to investments in clean energy sources like solar and wind with no plan to diversify its economy.

The Treaty 8 chiefs have also come out in strong opposition of the movement as it could place an international border through their land. Beyond the mega-constitutional politics that would be required for provincial secession, the treaty rights and sovereignty of First Nations would necessarily collide with secession. Similar concerns have been raised in Québec where the provincial government has tried to make claims to Indigenous land.

There is no doubt that the anger in Alberta vis-à-vis the Trudeau government is real. A recent poll reveals that while only 17 percent of Albertans said they were in favour of separating, 40 percent empathized with the sentiments behind Wexit. Respondents from Québec were second, after Albertans, most likely to consider Albertan secession a possibility. Despite this, the latest polls on Québec separation from 2016 and 2012, showed no resurgence in separatist support with most reporting they were “proud to be Canadian”.