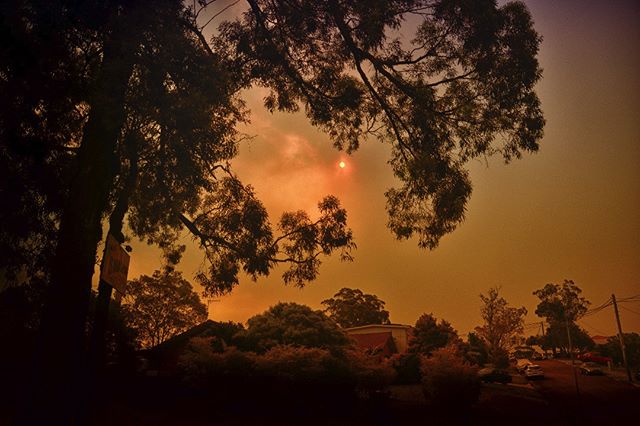 Residents and visitors on the small island of Mallacoota, a vacation spot between Sydney and Melbourne, began the new year under a blood-red sky. Photos of residents and tourists being evacuated on New Years Day brought renewed attention to the unusually devastating bushfires in southeastern Australia.

A total of 146 fires are burning across the state, with 65 uncontained, according to the New South Wales (NSW) Rural Fire Service. As of early January, wildfires have burned an area that is larger than the areas of Nova Scotia and Prince Edward Island combined. The fires have killed at least 24 people and 2,000 homes have been destroyed in addition to more than one billion animals killed. Many Australians have been displaced from their homes and told to find safety elsewhere.

It is not unusual for Australia to experience an intense bushfire season in the summertime. During this season, it’s easy for bushfires to start and spread. Typically, natural causes, such as lightning strikes in drought-affected forests, are to blame when bushfires begin. Since early 2017, much of NSW and Queensland have experienced below-average rainfall. And, in 2019, Australia endured its driest spring on record.

This has caused trees, shrubs and grasslands to become a near-perfect environment for flames to grow and spread. It has become scientifically indisputable that increasingly persistent heat and drought have made the country’s fire season longer and more difficult to contain.

Response of the Australian government

It is no secret that man-made climate change is the cause of this unprecedented crisis. In early December, Australian fire chiefs made their concern over the rising threat climate change clear when they called for a national climate change “emergency summit” with Australian Prime Minister Scott Morrison.

Morisson has been accused of inadequately responding to the current fire season and to the climate crisis at large for several reasons. Some even argue that the foundation of his presidency is rooted in climate change denial. In the summer of 2018, his predecessor, Malcolm Turnbull, was ousted in part because of his attempt to pass an energy bill to reduce carbon emissions in the energy sector.

In contrast to Turnbull, Prime Minister Morrison has been a staunch defender of Australia’s booming coal industry, even bringing in a lump of coal to Parliament several years ago while defending the industry. Morrison won the most recent Australian election by depicting climate change as a concern of elitist city dwellers, while denying that recent wildfires were anything out of the ordinary and portraying extreme wildfires as a crisis akin to previous natural disasters.

Anger towards Morrison’s unconcerned approach towards the climate crisis has only risen in recent months. In December, the PM’s decision to take a family holiday to Hawaii despite persisting bushfires infuriated many Australians. Additionally, Australia’s delegation to the recent UN Climate Action Summit was accused of thwarting the negotiations to form a global deal to cut carbon emissions.

Morrison has managed to admit that man-made climate change exists and has negative consequences on the environment. However, he refuses to accept the urgency of the climate crisis and has taken steps to ensure that an environmentally damaging, political-economic status quo is protected.

Morrison’s brand of climate change denial is not unique. President Trump acted similarly when he blamed the 2018 California fires on the state’s failure to rake forest floors as opposed to acknowledging the disaster as a product of climate change.

It is no coincidence that two of the wealthiest countries in the world, Australia and the United States, have been extremely reluctant to adopt significant climate change policy. Impactful climate change policy demands a change in the global energy system and the abandonment of fossil fuels. Such drastic changes would require long-term planning that goes beyond short-term economic benefits.

The path to significant change in Australia has been further complicated by the fact that Australia has managed to avoid recession for the past 27 years by supplying coal and liquefied natural gas to support the booming Asian economy.

As the largest exporter of coal in the world, it is no surprise that Australia is home to a powerful coal lobby that has helped guarantee that the Australian government continues to benefit the fossil fuel industry. Having benefited from the fossil fuel industry, it is unsurprising that Australian politicians prefer not to challenge an economic framework that has proven to generate profits.

This resistance to change is exemplified by Morrison’s response to being asked in 2018 to comment on whether climate change has intensified Australia’s droughts. He stated: “I’m going to leave that debate for another day.” Morrison’s insistence on delaying substantial climate reform, despite obvious and increasing environmental and human devastation resulting from the climate crisis, exemplifies a larger, global rightward shift on climate change.