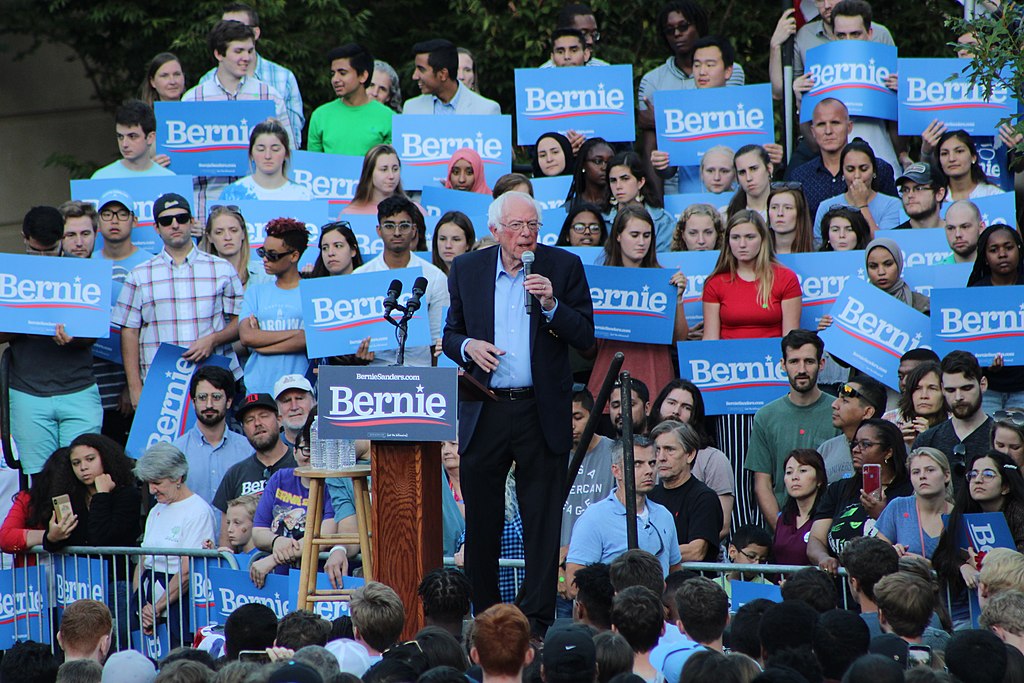 As voting in the Democratic primary election begins, the race looks increasingly frozen in place, with Bernie Sanders and Joe Biden competing for front runner status.

This is a stark reversal from just a few months ago, when a sudden heart attack took Sanders off the campaign trail and raised new concerns about his age. But as voters consider Biden’s past support for unpopular Social Security cuts, these age-related concerns have largely been forgotten, and the Democratic establishment is taking notice.

It is clear to me that the party establishment has launched a widespread and coordinated barrage of propaganda designed to stop Sanders in his tracks. Here is why those attacks are baseless and expose a damning establishment double standard.

The Myth of the “Bernie Bro”

In an attempt to explain away a chronic lack of enthusiasm behind their campaigns, establishment Democrats and their corporate media allies have taken to smearing Bernie Sander’s loyal supporters. Derisively branding the tens of millions of enthusiastic Sanders voters as overly aggressive “Bernie Bros,” the mainstream media, especially cable news and large print publications like the New York Times, have sought to stop Sanders’ rise by arguing his supporters are fundamentally incompatible with the Democratic Party.

According to the corporate media, Bernie Sanders and his supporters are overwhelmingly heterosexual, white men indifferent and even hostile to the struggles of minorities. Essentially, establishment Democrats are attempting to portray the most progressive politician in America as a reactionary force more concerned with white workers than anyone else.

This “Bernie Bro” narrative is absurd and patently false, as Senator Sanders’ coalition is more diverse than most of his competitors in the race. Not only does he enjoy one of the highest approval ratings from voters of colour, he also commands the most support among Hispanics  and Black voters under 35. Furthermore, the diverse Sanders coalition incorporates the support of the majority of female voters under 45.

Indeed, Senator Sanders often refrains from engaging in substantive-less virtue signalling or “woke” identity politics, instead preferring to focus on the real issues facing the racially diverse working class, such as high housing costs, low wages, failing schools, and healthcare. However, this focus on economic issues is no excuse for establishment pundits to ignore the fact that Sanders’ stances on social and racial justice issues have consistently been to the left of the Democratic Party.

For example, Sanders has consistently spoken out against Clinton-backed “welfare reform” and “tough on crime” policies, citing the resulting mass incarceration and extreme poverty that devastated communities of colour. Although he ultimately voted for the infamous 1994 crime bill, he made clear his opposition to the bill’s punitive provisions and explained his vote by citing the inclusion of the Violence Against Women Act and an assault weapons ban into the bill.

Even more telling of Sanders’ progressive principles is his consistent support for LGBT rights. While the Clinton establishment voted en-masse to enact homophobic legislation such as the Defense of Marriage Act and the “Don’t Ask Don’t Tell” policy that banned homosexuals from openly serving in the military, Sanders proudly stood up for LGBT rights in Congress. Furthermore, Bernie Sanders defended his principles during the Civil Rights Movement. He marched with civil rights leaders and was even arrested while protesting against segregated student housing.

The same individuals, including the Clintons, who once sparred with Sanders over many of these progressive stances now have recently flooded the airwaves with allegations that his coalition is dismissive of marginalized minorities and the social issues they care about. However, voters don’t seem to be buying this hypocritical selective amnesia and polls consistently show Sanders poised to perform well in several states in the coming weeks.

Upon Joe Rogan’s endorsement of Bernie Sanders, voters witnessed a flood of insincere establishment hand-wringing regarding Rogan, a celebrity with a substantial internet following, and his previous transphobic statements as well as interviews with far-right figures like Milo Yiannopoulos.

Once again, these attacks on Bernie are not just a continuation of claims that he is secretly racist, sexist, and transphobic. They are also an astonishing demonstration of establishment hypocrisy. While decrying Trump’s toxicity and dirty political tactics, establishment Democrats are doing just that by not only implying falsehoods, but also by holding Sanders to an impossible standard they themselves refuse to meet.

Many Democrats, smartly intending to broaden the Democratic coalition and appeal to culturally moderate voters, have appeared on shows like Joe Rogan’s. Similarly, feminist icon Hillary Clinton appeared on the Howard Stern Show despite his past statements. However, when Bernie Sanders chooses to do the same, suddenly Joe Rogan and his viewers are branded as reactionary white men worthy of immediate rejection.

Furthermore, Democratic insiders like the Obama and Clinton families regularly cozy up to individuals like George W. Bush, an anti-Trump conservative that lied to the nation in order to wage a useless war in Iraq that resulted in documented human rights abuses and war crimes.

Why isn’t the establishment attempting to “cancel” these Democrats for their association with less than perfect individuals?

It is because they do not ultimately care about fighting for marginalized communities and instead seek to simply stop the threat Bernie Sanders poses to pro-corporate establishment politics.

While opposing Bernie Sanders is perfectly legitimate in the democracy we live in, weaponizing identity politics and utilizing insincere and dishonest political platitudes to defeat 21st century America’s most progressive candidate is wrong, hypocritical, and reaks of the institutional rot within the Democratic Party. Middle America noticed this and rejected the Democratic establishment’s preferred candidate in 2016. If Democrats don’t learn their lesson, they may suffer the same fate in 2020.