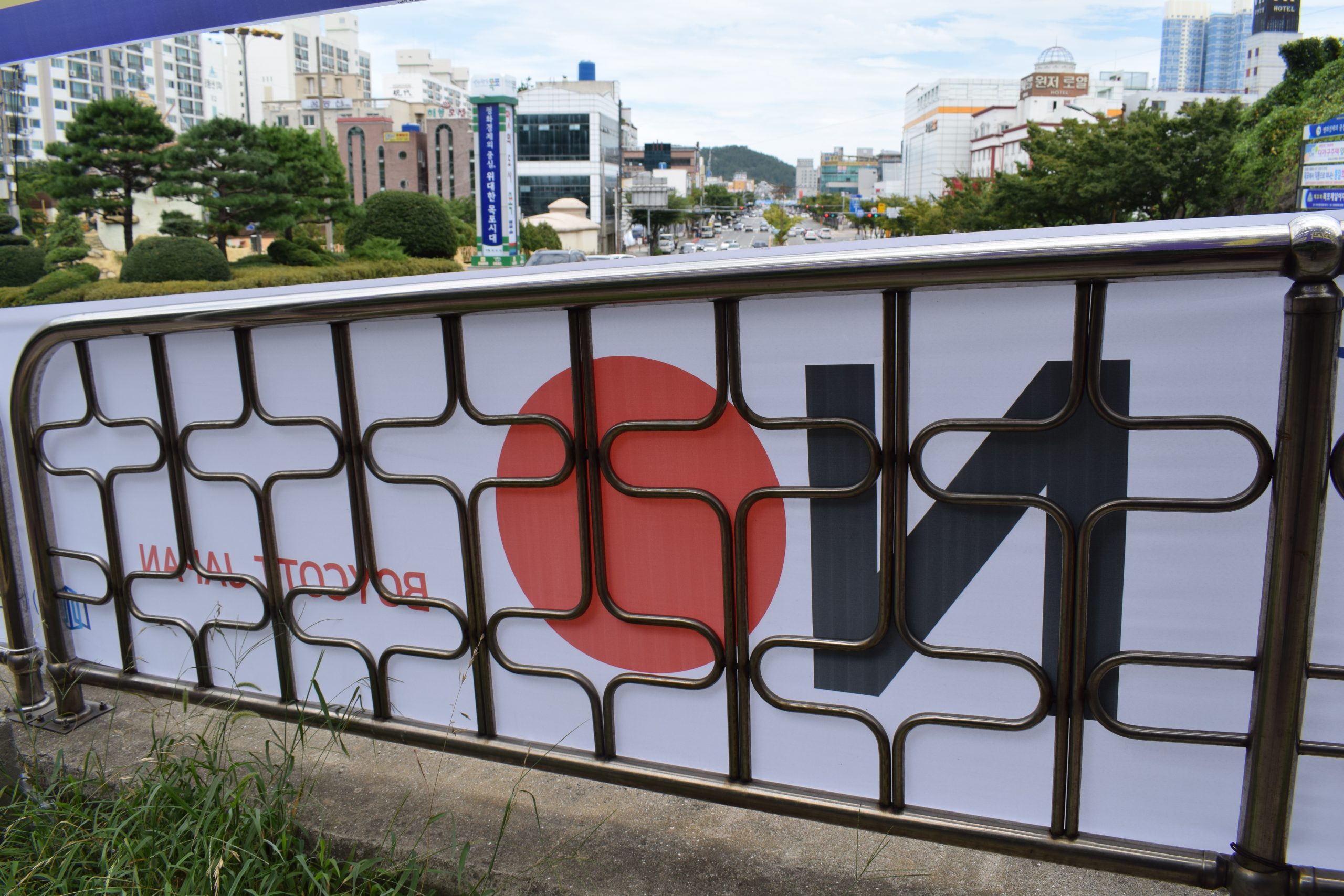 Japan and the Republic of Korea have long been engaged in a complex trade war which continues to this day. The trade war – which has had negative economic and diplomatic implications for both countries – can be largely traced back to their shared colonial past. Korea was annexed by Japan from 1910-1945.

During imperial Japan’s mission to “Japanize” the region and establish a hegemonic Japanese Pan-Asian identity, numerous atrocities and injustices were committed, the legacies of which continue to spark contemporary conflict between the two countries. Fueled by historical injustices and grassroots movements, this trade war is far from merely economic. The Korean-Japanese trade war has led to deteriorating relations, wedging both countries in a zero-sum game.

The beginning of the trade war was marked by Japan’s restriction on semiconductor and display panel exports to South Korea, a crucial material in its tech industry in July 2019. Though still unclear, the motive behind this is thought to be fear that the products would be accessible by North Korea. This is a common threat felt by many Japanese: North Korea has launched ballistic missiles over Japanese territory numerous times.

However, Japanese political scientist Kazuto Suzuki adds that there are historical reasons behind Japan’s distrust of North Korea: the unpredictability of Kim Jong Un’s regime, the possibility of a weakened US relationship, the fear of a North Korean refugee crisis and China’s expected larger circle of influence have manifested in distrust in South Korean trade, due to its physical proximity and shared past with North Korea. In August 2019, Japan removed the Republic of Korea as a whitelisted trade partner. This followed shortly after the South Korean boycott movement and the verdict given by the Korean Supreme Court, although the Japanese government maintains that it was not an act of retaliation.

The rise of tension can be noticed at the grassroots level as well: Japan has recently seen an increase in far-right (Uyoku Dantai) groups such as Netto-uyoku and the Zaitokukai. These groups are known to advocate for ultranationalist, Japan-supremacist views, and often encourage and inflame anti-Korean sentiments. Academics Lindgren et al argue that this stems from a larger issue of the national identity: that Japan’s refusal to admit Korea’s democratic legitimacy and Korea’s refusal to admit Japan’s pacifist nature have reverted both countries’ perceptions of each other to colonial times. The contemporary Japanese population’s view of Korea is increasingly negative, which only results in higher stakes due to the desire to uphold nationalistic pride.

The South Korean Side

In response to Japan’s export restriction, South Korean citizens started a boycott of Japanese products, tourism and Japanese ingredients in Korean products. At the grassroots level, civilians pushed for a nation-wide politicized movement to emphasize the anti-Japanese stance: arguably an essential and unifying element of the Korean identity. Following the protests, a Korean Supreme Court verdict was released which demanded that the Japanese automobile company Mitsubishi should compensate the Koreans who were forced labourers for the company during the colonial period. This only added to the fire, as the Japanese government claims that all matters have already been settled per a treaty signed by the two countries in 1965. The Japanese government’s refusal to react to this verdict further heightened the stakes for the trade war, as it propelled the view that Japan’s whitelist removal of Korea was reflective of the Japanese government’s unrepentant and continued denial of its colonial actions.

Following Japan’s whitelist removal, the Korean government withdrew from an intelligence-sharing agreement (although this was later reenacted) and reduced Japan’s trade status to its non-favoured trade partner list. Grassroots movements have also played a crucial role in the prolongation of anti-Japanese sentiment in South Korea, as many colonial grievances are closely tied to anti-Japan rhetoric (such as that of Korean “comfort women” and the revision of Japanese history textbooks). It certainly doesn’t help that Koreans have a generally negative attitude toward the government of Japan, and vice versa.

The South Korean – Japanese trade war cannot neatly be summed up as a mere economic disagreement; it stems from much deeper historical roots and local grassroots movements. In order to understand the behaviour between the two countries, one must understand how each country’s past has affected its perception of its own identity vis-a-vis the other. Lindgren et al. discuss how opposition to the other has become embedded in both Korean and Japanese identities. The countries’ shared history has allowed for this mutual hatred to manifest in diplomatically and economically harmful ways.

Although it is uncertain how the trade war will conclude, one can assume that concessions will have to be made on both sides. These concessions, however, would be incredibly difficult without the support of the people, in which case altering the perception of “the other” at a grassroots level is crucial. By addressing the negative perceptions at the level of the populace, both countries could lay the groundwork for more beneficial diplomatic and economic allyship in the future.