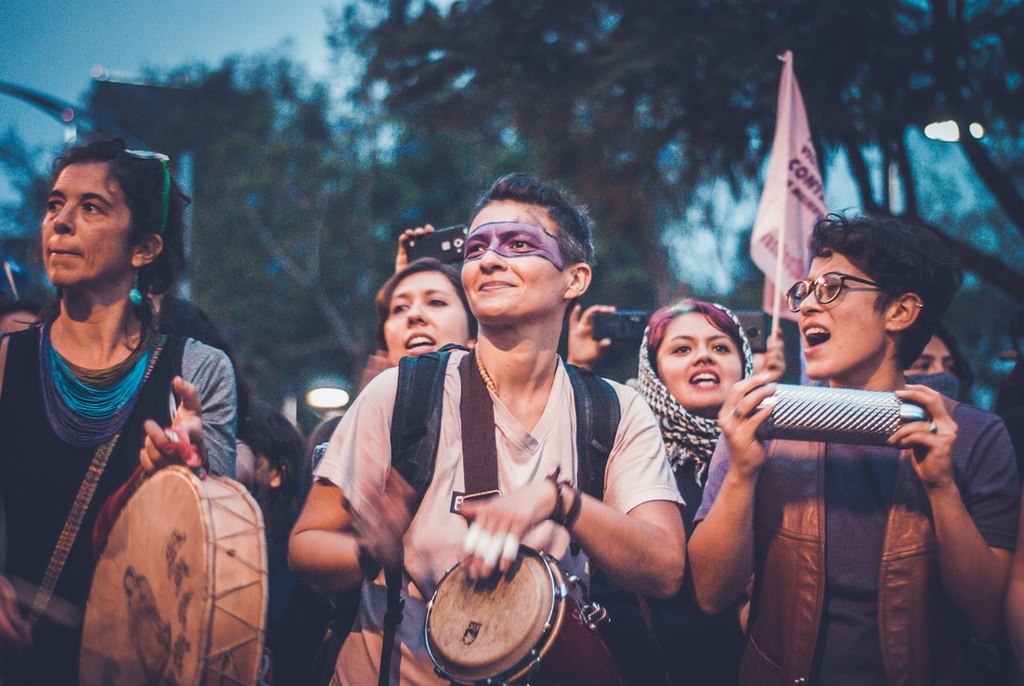 On March 8th, thousands of women and men in 120 cities worldwide marched in demand for gender equality on International Women’s Day. Among those, Latin American countries including Chile, Argentina, Mexico, Peru, Brazil, and Colombia witnessed feminist protests demanding greater gender equality. Some advocated for the legalization of abortion while others denounced unequal labour conditions.

Most of these groups, however, denounced a particular issue that continues to affect Latin American countries: the persistence of gender-based violence and femicide. This issue is particularly salient in Mexico, as church groups and civic organizations joined feminists across the country to protest against the ineffectiveness of their government in protecting women against violence.

Mexican women protested over two days, March 8th and 9th. On the first day, a massive march promoted by feminist networks took place in Mexico City. On the second day, women participated in a nation-wide strike under the name “Un dia sin nosotras” (A day without us), meant to highlight the important role of women in the labour force and the potential consequences of continued gender-based violence on the country.

Both events were widely supported across the country. At its peak, an estimated 80,000 people were present in the march. Seven out of 10 women participated in the strike the next day, which is evidenced by the empty metro stations and buses designated for women. According to Jose Manuel Lopez Campos, president of the Confederation of National Chambers of Commerce, the strike cost the economy 30 billion Mexican pesos (CAD $1.85 billion).

The march comes at a moment when the country remembers two particularly gruesome cases of gender-based violence. The murder of a young woman, Ingrid Escamilla, and of a seven-year-old girl, Fatima Aldrighett, in February captured the public’s attention. Escamilla was killed and mutilated by her husband. The pictures of her disfigured body were then leaked to the public by police agents. Aldrighett was abducted from her school and then found dead after being tortured and raped.

Nationwide, 3825 Mexican women were murdered in 2019 alone. According to the Instituto Nacional de Mujeres (National Institute for Women), 10 per cent of Mexican women reported having been survivors of domestic violence during the previous year in 2016. An additional 46 per cent reported having been survivors of intimate partner violence at some point in their life. Similarly, according to the Instituto Nacional de Estadistica y Geografia (INEGI), in 2019, for every sexual crime committed against men, including sexual abuse, harassment and rape, 11 crimes were committed against women.

Another issue that motivated the march, and which manifested more clearly in the following strike is the demand for equal labour conditions. Women in Mexico dedicate 28.7 hours of unpaid labour a week, compared to 12.7 hours by men. Similarly, the country faces a gender wage gap of 34 per cent in a country where women represent approximately 40 per cent of the labour force.

The protest received mixed signals from the government of Manuel Lopez Obrador, who has at times expressed support for the movement and at times diminished its importance. That being said, the march and the strike received the public support of several of the cabinet women ministers, such as the Minister of Energy, Rocío Nahle, or the Minister of Culture, Alejandra Fausto.

The ministers publicly acknowledged the lacking performance of the government and promised to do better in addressing gender-based violence. Several of them even participated in the strike. Furthermore, the Ministry of Education allowed women to skip work and participate on the strike, promising no sanctions for those who do.

The impacts of the march and strike in Mexico are monumental and have placed the Mexican feminist movement as a reference point for other movements across Latin America. Still, even if effective in raising awareness in Mexico and Latin America, the question remains of whether it will induce change in the country regarding gender-based violence.

In general, it could be argued that the current administration was already sensitive to gender-based violence. The government has, in general, maintained a parity between men and women. Similarly, the president has surrounded himself with feminist public officials in his cabinet. States in Mexico have the ability to declare a “gender-based violence state of emergency,” which gives federal governments more powers to combat violence against women. Similarly, in August, Mexico City’s government announced an action plan to eliminate this type of violence.

And yet, increased attention does not necessarily imply better management of the issue, even under the best of intentions by public officials. As evidenced by the increase in murders of women to 10 victims per day. This puts the current administration between the need to change its plan of action regarding gender-based violence, put forward by the march, and the reluctance to acknowledge that the current policies have not been effective.

Still, the march and strike participation rate, as well as the support from important officials in government may be evidence of important but subtle changes in the country’s political culture regarding sexism, gender-based violence and gender-based power dynamics.