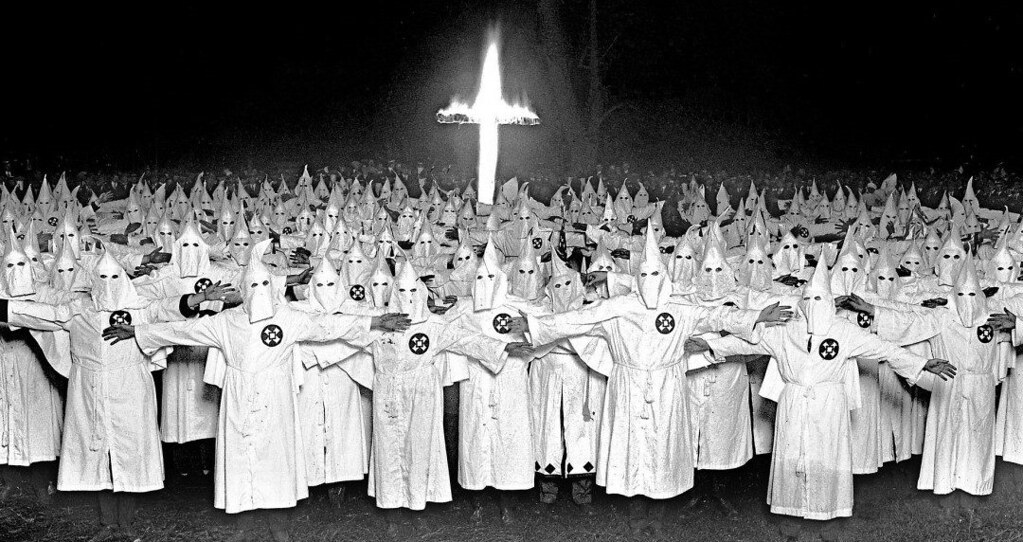 According to the United States’ Federal Bureau of Investigation (FBI), domestic terrorism is defined as “violent, criminal acts committed by individuals and/or groups to further ideological goals stemming from domestic influences, such as those of a political, religious, social, racial, or environmental nature.” It should follow that any organization that commits acts of violence against an ethnic or racial group to further the notion of white supremacy should fall under this definition of terrorism.

Why then has the U.S. government failed to explicitly designate the Ku Klux Klan (KKK) as a domestic terrorist group?

The KKK originated in the Reconstruction era, its hateful violence targeting Black people as well as those who supported racial equality. Despite a long-term trend of declining membership, the group has never disappeared. Today, much of its activities have moved somewhat ‘underground,’ as the virtual world provides members with a false sense of anonymity and protection. Just last year, it was reported that PayPal was enabling the Klan to accept online donations before activists used social media themselves to demand accountability from the e-commerce magnate.

As Black Lives Matter (BLM) protests continue to take place across the United States and the globe, the Klan has once again made its physical presence known. On Sunday, June 7th, a man later admitting to being a Klan leader drove into a group of BLM protesters in Richmond, Virginia. The man is being charged with assault and battery, attempted malicious wounding, and felony vandalism, with the possibility of additional hate crimes charges. Missing is any mention of terrorism charges by Henrico County’s Commonwealth Attorney Shannon Taylor.

While federal law enforcement agencies have often cited inadequate legal statutes as the reason for their apparent inability to lay charges of terrorism upon violent domestic white supremacists, some experts make the compelling argument that law enforcement already has all the tools required to do so. A report by Michael German of the Brennan Center for Justice and Sara Robinson of NYU School of Law states that 51 out of the 57 federal offences listed under 18 U.S.C. § 2339A (the statute criminalizing the act of providing material support for terrorists) can be used to prosecute domestic terrorism. The report also argues that definitions of terrorism are being ignored by law enforcement, as the Justice Department has already explicitly named white supremacists as domestic terrorism threats.

The failure of prosecutors to acknowledge that Black people have long been the targets of terrorism is perhaps evidence of preconceived notions about which racial groups are legitimate victims of terrorism, and which groups are the perpetrators. According to Dr. Amarnath Amarasingam of Queen’s University, a researcher specializing in extremism, there is an inclination to think of brown people as “more prone to ideological thinking” and white people as “ideology-free” — a problem that is attributable to white privilege. The tendency to think in this manner exists despite significant evidence that the threat of white supremacists to the security of the American people is much greater than the threat of typically cited terrorist groups, such as ISIS and al-Qaeda, according to a recent report by the New Jersey Office of Homeland Security and Preparedness.

Thus, the indisputable racial biases attached to the label of ‘terrorist’ equips the KKK with a certain level of protection from American law enforcement.

Why is the label of “terrorist” significant?

While many labels for criminal acts may seem arbitrary, researchers have shown that the use of the word “terrorist” has several significant effects. The word evokes significantly harsher condemnation and results in the favouring of global (not merely local or national) responses, as well as more support for the use of the army and intelligence services in fighting against violence that carries this label. Refusing to label the KKK as a terrorist organization thus inhibits a strong collective response against its acts of terror, both by the public and by law enforcement.

As Dr. Amarasingam notes, the public and institutional reactions to the discovery that several members of the Canadian Armed Forces were found to have links to alt-right white supremacist groups should be just as strong as if they were found to be supporters of ISIS, however, this is certainly not the case. This is just one example of how racist attitudes are, to some degree, expected in the law enforcement agencies of countries whose agencies and institutions are centred around the protection of ‘whiteness’ and white people.

The Propagation of Hate

The use of the ‘terrorist’ label in the media was also found to evoke the “rally round the flag” effect, wherein popular support is oriented towards leaders during a crisis. This calls into question the role of the current American administration in allowing or inciting racist hate.

Donald Trump’s political success has emboldened white supremacist groups, as research confirms the rise of both white supremacist activity and acts of violence since 2016 and throughout his term. After Trump won the election, one Klansman was quoted as saying that he felt he was getting a president who shared “some of the same ideals,” and despite the Trump campaign’s public rejection of their backing, the KKK’s official newspaper has also proclaimed support for him. Studies also show that the number of hate groups in the US has been increasing since his rise to political power.

Despite Trump’s national security adviser, Robert O’Brien, denying that systemic racism exists in the American police force, it is well-documented that members of white supremacist groups frequently infiltrate law enforcement. An FBI report from 2006 revealed the popularization of the term “ghost skins” amongst these groups, which refers to members who try to mask their racism in public, sometimes for the explicit goal of obtaining positions in law enforcement. The report also notes that other infiltration strategies are not at all covert, and include members knowingly offering information to law enforcement to “determine an agency’s interest in the organization.”

Although the FBI’s report is heavily redacted, it explicitly mentions the KKK’s historic ties to local law enforcement agencies. It also notes that the right to join the KKK is protected by the freedom of association provision of the First Amendment, but that government can “limit the employment opportunities” of members who work in law enforcement “when their memberships would interfere with their duties.”

The implication that membership in this organization could in any way not affect one’s actions whilst in a position of authority is ludicrous, as is the assumption that an individual’s membership will be known or reported. For example, just last year, a Michigan couple was touring a home with their real estate agent when they came across several Confederate flags and an application to join the KKK. The home belonged to a police officer who had once been completely cleared after fatally shooting an unarmed Black man, Julius Johnson. After the discovery, which was posted to social media, the officer was ‘fired’ from the police department by way of a generous separation agreement which safeguarded his 25-year pension, and the county prosecutor has yet to reopen investigations into the 2009 shooting.

When contrasted with the fact that the FBI frequently arrests and interrogates even suspected terrorists in the name of national security, not labelling the KKK as a terrorist group clearly offers its members many continued protections and enables the group’s continued existence.