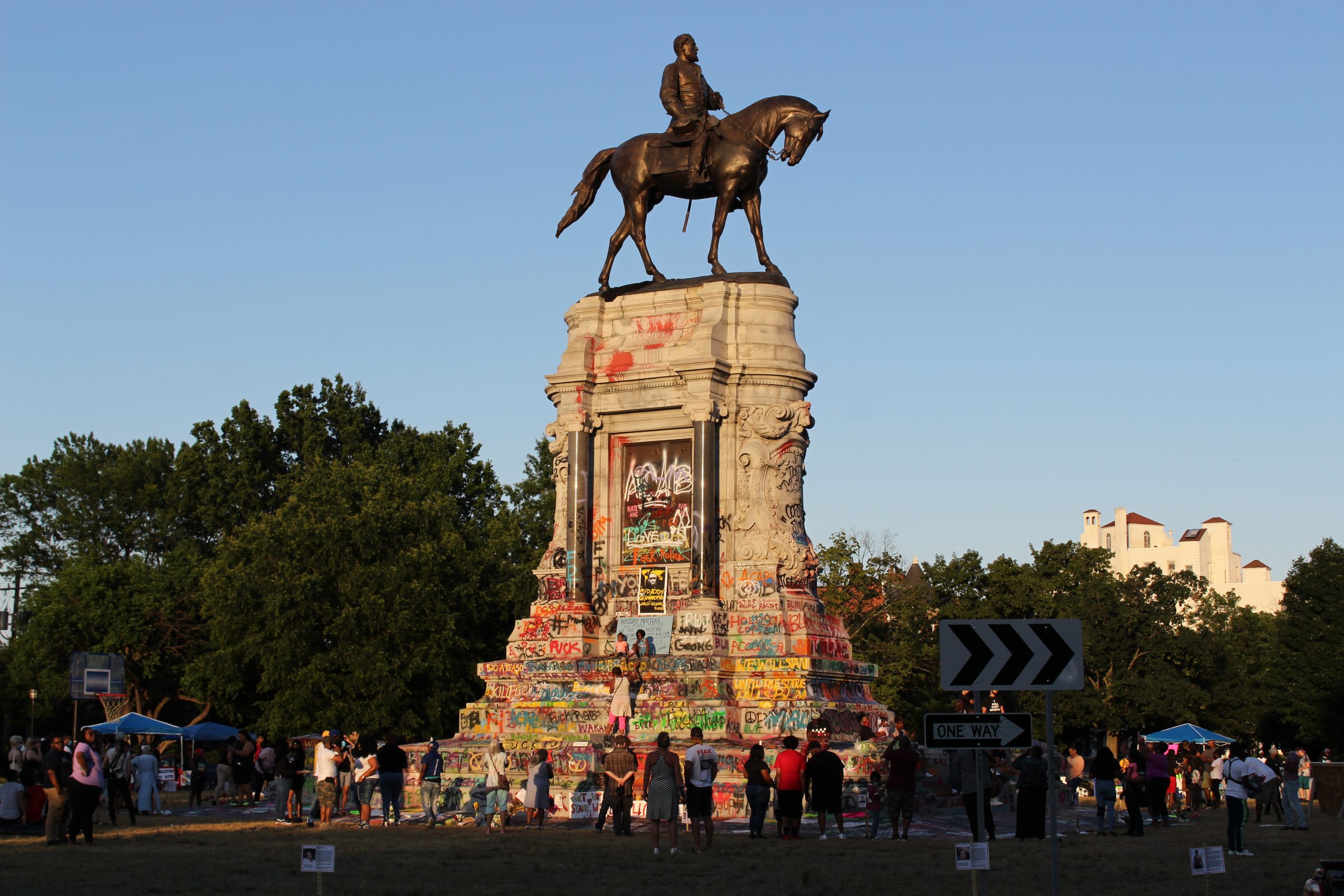 Throughout the past month, the world has watched protestors flood the streets of every continent demanding justice for Black victims of American police brutality. In this recent surge of mass mobilization, individuals protesting on behalf of the Black Lives Matter movement have sparked controversy in their destruction of both private property and public monuments. While retail property wreckage has skyrocketed during these public uprisings, it is the destruction of cultural monuments that has caught the attention of social media outlets. While some may look on in horror at the defacement of Western icons such as Christopher Columbus and Winston Churchill, these acts uncover both the utility of iconoclasm as a force of mass mobilization and as a signal of imminent regime change.

Iconoclasm may be described as the act of defacing culturally salient religious or political symbols to delegitimize the moral authority behind such symbols. While iconoclastic methods range from flag burnings to the destruction of entire religious spaces, these practices display a common ethos rooted in the disruption of culturally hegemonic moral principles. It is important to note that the nature of the current iconoclastic movement in the US is related to symbols of the state, and therefore to analyze this movement against broader historical patterns one must look at state iconoclasm particularly.

While historically successful state-iconoclastic movements depict the widespread destruction of symbols to spark regime change, this does not require that peaceful protest be seen as a useless form of citizen mobilization, or that peaceful protest is a non-ideal mechanism for displaying citizen unrest; for as G.W.F Hegel’s truism goes “we learn from history that we do not learn from history.” However, the historically successful use of iconoclastic imagery to further citizen mobilization and regime change showcases the impermanence of an America rooted in racist discourse and symbology — as the symbols of the formerly revered American empire come crashing down via popular revolt.

Some of the most notable regime changes of modern history have been nurtured and legitimated through iconoclastic protest. The French Revolution, the fall of the Soviet Union and the Islamic Revolution display three of the most socially legitimated iconoclastic protests of the past three centuries. All three instances arose out of citizen unrest rather than top-down legislative politics, displaying the widespread initiation of revolution through symbolic acts of destruction.

During the French Revolution, the Bastille prison and military base, a symbol of ancien regime political control, was stormed and later demolished by dissatisfied citizens. Statues depicting Henry IV, Louis XIII, XIV, and XV were all destroyed throughout the country following the initial defacement of Bastille prison. In the face of the revolution, the Declaration of the Rights of Man, one of the first written democratic constitutions, was published, and thus the birth of the secular French Republic was born. While these institutions may have alleviated the inequalities caused by domestic institutions, colonial practices began to proliferate throughout Africa, the Middle East and the post-revolution Americas. The war crimes committed under France’s colonial administration clearly display a regime which disregarded its own conception of the “Rights of Man” and continued to conduct authoritarian governance. Nonetheless, domestic institutional change was sparked through the iconoclastic instrument of the masses.

The Soviet Union’s transformation from a communist-inspired totalitarian bloc into a fractured mass of mostly democratic nation-states may additionally be traced back to the destruction of state symbolism. The official dissolution of the USSR did not occur until 1991, however, this eventual regime change followed two years of Soviet degradation sparked by a single act of iconoclasm. On November 9, 1989, the Berlin wall, which symbolized the global division between communist institutional life and  neoliberal trade, was demolished by citizens of both East and West Germany.

Furthermore, today’s Republic of Iran has internalized iconoclasm as a symbol in itself of the Islamic Republic’s moral legitimacy. Every year since the 1979 revolution, the public holiday al-Quds day is met with the incineration of American and Israeli flags to signal Palestinian solidarity and anti-American imperialism. These flag burnings display opposition to the former allies of the Reza Shah’s pre-1979 secular autocracy, while legitimating the establishment of the contemporary Islamic republic.

The aforementioned acts of destruction depict how certain regimes have historically been delegitimized and eventually, toppled. Whether a result of ancient inequality, the death of millions in Stalinist Gulags, or western imperialism, states have collapsed due to their inability to consolidate moral authority over their populations. Within the contemporary context, it is the American regime that has fumbled with its moral authority, through the institutionalization of slave labour and widespread police brutality. In many states, statues of Confederate leaders, slave traders, Christopher Columbus, and other racist American figures, have been destroyed in response to the ongoing murder of Black Americans at the hands of the police.

The legitimacy of the American criminal justice system is now being questioned, evidenced by the slogan “defund the police,” which has become a nationwide cry to end the structures of police brutality that remain societally prevalent. The American slave trade, Jim Crow laws, and the modern prison-industrial complex depict how racism has both evolved and been essential as a constitutive element of the United States. In response, protests have been sustained in the United States since May 30th as the Black Lives Matter movement hopes to target centuries of racism.
Although critics of the Black Lives Matter movement, which include the President of the United States, continue to label those engaging in destructive acts as thugs, it is historically misguided to criticize the actions of protesters as occurring without precedent. As Martin Luther King Jr. triumphantly cried out during the civil rights movement: “riots are the cries of the unheard.” Iconoclasm displays how heinous offences to human rights can only be internalized by the masses for so long. Eventually, Columbus has got to come crashing down, alongside racist American institutions founded on slavery, perpetuated by Jim Crow, and that persist to this day via the unjust murder of Black lives.

Featured photo by Joseph and obtained via Flickr under a CC BY-NC-SA 2.0 license.