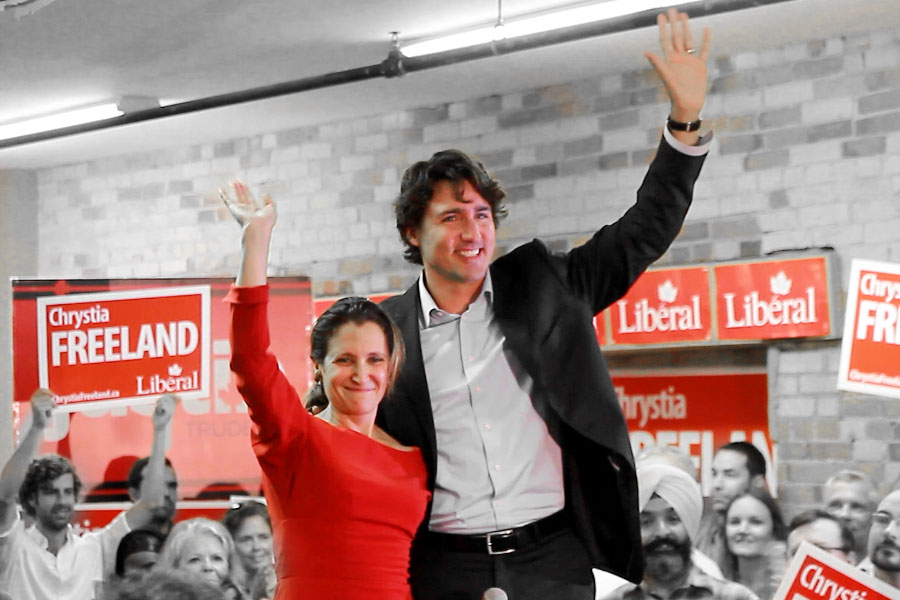 On Tuesday, August 18th, Chrystia Freeland was sworn in as Minister of Finance. Freeland replaces Bill Morneau who stepped down from the position on Monday.

This shuffle is notable for several reasons. First, it provides some insight into Liberal leadership response to the recent WE scandal. Second, it means changing economic leaders during the country’s worst economic crisis since the second world war. Finally, Freeland is the first woman to become Finance Minister in Canada, marking the important shattering of a glass ceiling (or perhaps descent onto a glass cliff).

Morneau has long been considered Justin Trudeau’s right-hand man (or at least one of them). His departure, particularly during a time where the Finance Minister is of the highest importance, is likely a symptom of deeper troubles within the Liberal leadership. Morneau is currently under investigation by the Ethics Commissioner, along with Justin Trudeau, for not recusing themselves from conversations leading to the now-cancelled $543 million dollar contract with WE Charity. The contract was intended to administer a student-volunteer grant but was cancelled after Trudeau’s family ties to the WE Charity and the lack of open competition for the grant came under scrutiny.

The WE scandal is neither the first time that Trudeau has been embroiled in an ethics controversy, nor is it the first time that a staff member related to a scandal has stepped down in the immediate aftermath. When Trudeau came under fire for interfering with then-Minister of Justice and Attorney General Jody Wilson-Raybould’s handling of corruption charges against Quebec company SNC-Lavalin, Trudeau’s top aide and longtime friend Gerald Butts resigned. Prior to the SNC-Lavalin affair coming to light, Jody Wilson-Raybould resigned.

While Morneau’s resignation comes after calls to do so from the opposition, it is likely that his resignation is not entirely due to Trudeau asking him to resign. While Trudeau likely appreciates a shakeup in the office most embroiled in the scandal, a typical scapegoating cabinet shakeup would have pushed Morneau into another cabinet position. It certainly wouldn’t have ended with Morneau stepping down from his own seat in Parliament.

Rather, it is likely that the relationship between Morneau and Trudeau has broken down substantially, leading to Morneau wishing to leave just as much as Trudeau might want him to. Morneau and Trudeau have allegedly butted heads on several important policy decisions throughout the pandemic, including the all-important federal wage subsidy. For Morneau, who now wants to lead the OECD, the Finance Minister job may simply no longer be worth it.

Although Morneau’s departure may give Trudeau some marginal respite on the WE scandal, the resignation brings on new challenges as a new minister must take over the all-important portfolio at a time when many of the policies put in place by Morneau (including the CERB) are now ending. The unfortunate timing of this change to the role of Finance Minister serves as further indication that this is far from a routine change in the Prime Minister’s close circle.

Luckily, the minister tasked with replacing Morneau has ample experience with leading important portfolios during tough times. Chrystia Freeland shepherded Canada through the NAFTA renegotiations and became Minister of Intergovernmental Affairs at a period of heightened tensions between the provinces and the federal government. Freeland has also published a book on the increasing wealth of billionaires at the expense of the general public.

As the first woman to take on the role of Finance Minister, Freeland breaks an important glass ceiling (referring to the idea that women and people of colour can come close to top positions of power, but often just fail to reach them due to systemic barriers). However, she may in fact be walking out onto a glass cliff. This is the notion that women often reach positions of power (indeed, breaking glass ceilings) at a time when an organization is facing a period of turmoil or decreased success. The chance of failing in the position is therefore much higher.

Owing to the ongoing economic crisis and the WE Charity scandal, the job ahead will undoubtedly be a difficult one for the new Minister. One can only hope that Freeland’s time in the role will not end in the same controversial way that Morneau’s did, and that her appointment to the position will continue to be an important step forward for the representation of women in powerful ministerial roles.

Featured image by Joseph Morris and obtained via Flickr under a CC BY-ND 2.0 license.