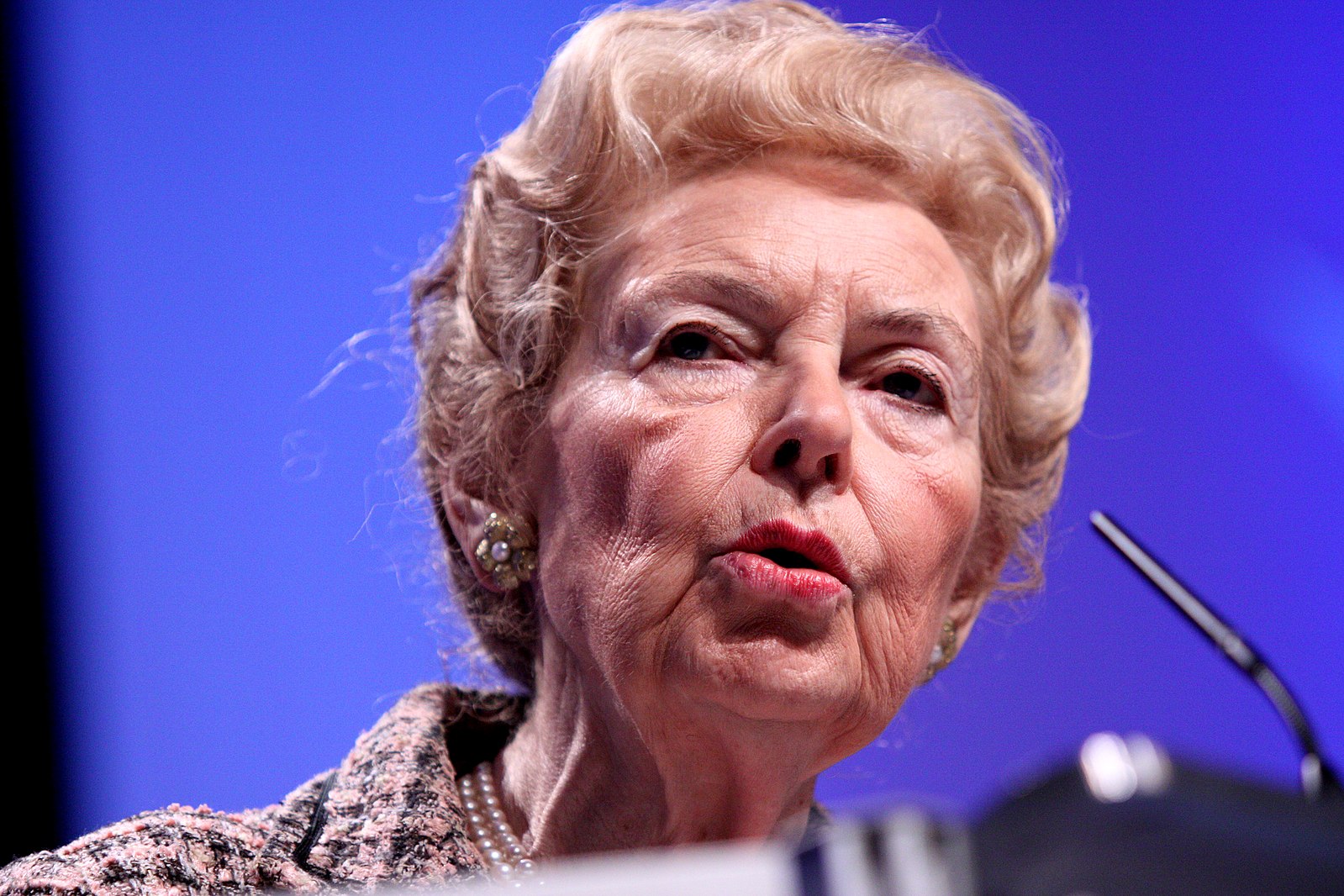 In 1972, feminists across America rallied in an attempt to ratify the Equal Rights Amendment to enshrine the equal rights of all Americans, regardless of sex, in the constitution. One woman, however, fervently opposed it. Her name was Phyllis Schlafly.

Mrs. America, a historical drama TV miniseries released this year, tells the story of the movement to ratify the Equal Rights Amendment (ERA), and the unexpected backlash led by conservative activist Phyllis Schlafly. The series is unique in its decision to make Schafly the protagonist, shifting the focus away from ERA activists like Gloria Steinem, Betty Friedan, and Shirley Chisolm, instead to Schlafly’s role in the anti-ERA movement. In doing so Mrs. America highlights the conflicting ideas about the role of women in society, and questions the very meaning of feminism.

Phyllis Schlafly, played by Cate Blanchette, sees herself as a defender of traditional gender roles and Christian family values. She advocates that women’s God-given role in society is to be a traditional housewife and homemaker — an irony given Schlafly herself was a prominent, full-time activist. She argues that the ERA would prohibit gender-based privileges that benefited women. Specifically, she argued that the Amendment’s equal status requirement would take away women’s access to certain government services and benefits by eliminating women’s status as dependents of their husbands.

This reflected the fear of many women that the ERA would force them outside the home to compete in the job market with men, leaving them at a disadvantage. While eliminating gender distinctions from the constitution understandably worried those who were dependent on them, the goal of the ERA was to expand the rights of women, not constrain them.

By prohibiting gender-based distinctions in federal and state laws, the ERA would have assured the right of women to reproductive autonomy. It would have constitutionally protected women’s right to personal autonomy, self-ownership, and self-determination over their own bodies. It would also have prevented loopholes in the law that allow for employers to engage in sex-based discriminatory pay practices.

Nevertheless, many women home-makers were apprehensive of such change. “The very vagueness of the Equal Rights Amendment meant there was going to be a lot of argument about what it would do,” says historian Marjorie Spruill. As a result, Mrs. Schlafly was successful in recruiting volunteers — mostly other women home-makers — to help her cajole Republican legislators into opposing the ERA. Many believe that Mrs. Schlafly’s campaign against the Equal Rights Amendment played a large part in its failure to be ratified, and many therefore see her as the “anti-feminist that killed equal rights.”

That being said, while Mrs. America highlights her antagonistic opposition to female empowerment, the series also portrays Schlafly as a kind of accidental feminist herself. Schlafly is independent, driven, and self-assured. In addition, as much as she supports wives serving their husbands and children, she regularly neglects her own domestic duties for her activism. While she was outwardly a supporter of anti-abortion, homophobic, and heteronormative thinking, Schlafly is depicted enrolling in law school, defying domesticity and superseding her husband’s limelight in her anti-ERA campaign tours and speeches. Phyllis Schlafly certainly isn’t a ‘traditional’ feminist, however, the contradiction between her opposition to women’s liberation and her own careerism, as highlighted on the show, urges us to read her as a feminist in her own way.

Feminist theorist bell hooks, however, challenges the idea that anyone can be considered a feminist, and likely wouldn’t see Phyllis Schlafly as one. In her foundational book Feminism is For Everybody, hooks argues that feminism is for everybody, but not just for anybody [1]. She rejects “the notion that there could be as many versions of feminism as there are women,” which assumes that, “no matter what a woman’s politics [are], be she conservative or liberal, she too could fit feminism into her existing lifestyle” [2]. While this perspective’s inclusivity may be appealing, she argues that any woman who “colludes” with systems that harm women is “working in opposition to feminism.” For example, hooks argues, one cannot be both anti-choice and a feminist, since depriving females of reproductive rights is a form of sexist oppression.

Considering Phyllis Schlafly’s anti-abortion stance, bell hooks would not label her as a ‘feminist in her own way.’ For hooks, “feminist politics is losing momentum because the feminist movement has lost clear definitions” [3]. Ultimately, too much inclusivity, in her perspective, is a bad thing.

In Mrs. America, some activists in the ERA movement championed this idea of exclusivity. In one scene, a group of the pro-ERA activists discuss the movement’s success. One woman brings up her concern that they “wouldn’t want housewives thinking that we are against them,” to which a fellow member replies: “We are against them!” The group of activists felt that the housewives and home-makers were inherently working in opposition to feminism. This scene demonstrates how the ERA movement held some notions of exclusivity; everyone could be a ERA activist, but not just anyone could.

One of the most telling aspects of Mrs. America, therefore, is the depiction of the 1970s feminist movement’s failure due to infighting. The pro-ERA activists’ rejection of housewives illustrates how this may have come to be. The movement ultimately became confused and fragmented by all of the divisions over who could or couldn’t belong to the feminist movement. The movement’s failure to fully include the perspectives of home-makers, poor women, working women, and women of colour encourages audiences to think critically about how exclusivity prevented the success of the ERA.

In an interview with The Guardian, Gloria Steinem reflects on this idea of inclusivity. Steinem discussed the importance of women of all ages, backgrounds, and beliefs working together. “Segregating by age is as ridiculous and destructive as segregating by race or class or gender or anything else… We learn from each other… We need each other,” she said. From this perspective, the feminist movement is strengthened by greater inclusivity and acceptance of a diversity of beliefs.

Even though Schlafly’s ideas diverged from those leading the ERA movement, Mrs. America shows that she may not have been so anti-feminist after all. Phyllis Schlafly fought for the recognition of her fellow housewives’ voices and needs. Even though she ostensibly rejected gender equality, Schlafly inadvertently advocated for her own kind of feminism, without even realizing it. It therefore seems that her issue with feminism was a partisan one. She felt that the ERA movement supported an exclusively liberal agenda and attacked women who wanted to stay at home and be valued as wives and mothers.

While Phyllis Schlafly may not have been a traditional champion of women’s rights, Mrs. America reframes Schlafly’s anti-feminism. The series highlights the need for a more inclusive understanding of what feminism is, and who can or can’t belong.

As Gloria Steinem said in her 1970 testimony before the Senate on the Equal Rights Amendment “we are all sisters in fighting against these outdated myths.” In fighting for women’s rights, we need to be in this together.

Featured image by Gage Skidmore and obtained via Wikimedia under a CC BY-SA 2.0 licence.