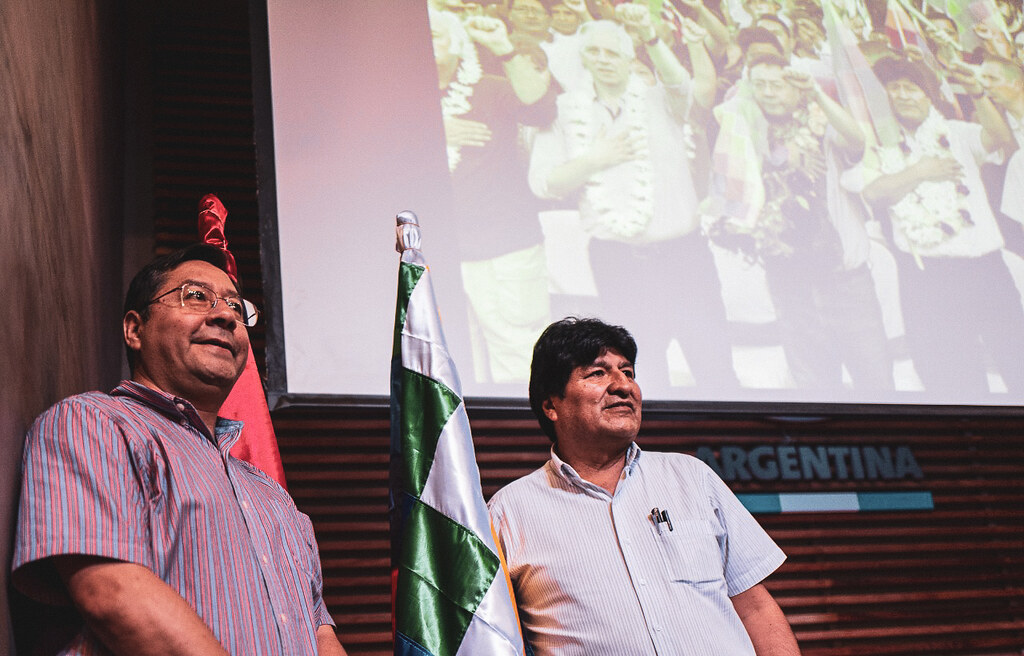 On October 19, Bolivians elected Luis Arce of the Movimiento al Socialismo (Movement for Socialism) party to the Presidency with a striking 50 per cent of the vote, well ahead of centrist Carlos Mesa, who received 30 per cent of the vote. Leftist leaders across South America conveyed their support to Arce, with Gleisi Hoffmann, the president of the Brazilian Workers’ Party (PT), tweeting, “Viva the Bolivian people! Viva democracy!” The leaders of Mexico, Argentina, Venezuela, Cuba, Peru, Chile and Uruguay also expressed congratulations to Arce.

The victory for Movimiento al Socialismo (MAS) comes just one year after longtime President, Evo Morales, was forced to resign by Bolivian security forces. This move, which Morales and his supporters labelled a coup, came after allegations of vote-rigging in the October 2019 election and weeks of popular unrest. After MAS politicians resigned en masse, Jeanine Áñez of the right-wing Democrat Social Movement party was sworn in as Bolivia’s Interim President, a move that sparked massive protests in support of Morales.

Arce’s victory is a testament to the leftist ideological orientation in Bolivia and an electoral mandate reminiscent of Morales’s first victory in 2005. Jim Shultz, the founder of the Latin American Democracy Centre, argues that “the rightwing was given a chance to govern and proved that it is only interested in its own power and in itself and has contempt for the indigenous and poor of the country. They demonstrated that by pretending they had legitimacy that they didn’t, by overseeing real human rights abuses and impunity, and by being incompetent and corrupt in their governance. And people weren’t going to have it.”

Schultz’s criticisms of the group may be well-founded. Áñez initially promised not to run or support any candidate in the upcoming presidential election, stating that “This is a government of peace, transition, and management.” Just one month after, Áñez declared her candidacy for the election, and only withdrew from the race because she argued that the opposition to socialism should be united. Áñez’s history of racist statements, as well as her failure, at least initially, to appoint a single Indigenous person to her cabinet, stood in stark contrast to how Morales, the first Indigenous President, handled national race relations.

Áñez bungled the two major crises she faced, both of which should have elicited international outcry: the political unrest after the overthrow of Morales, and COVID-19.

In November 2019, a standoff between Morales supporters and the national army outside a fuel storage depot left eight Bolivians dead in the city of El Alto. While Áñez’s government denied responsibility and labelled the protestors as “terrorists,” locals, like Aurelio Miranda, decried that “What happened was a massacre … They used weapons like you use in a war.”

The Inter-American Commission on Human Rights (IACHR), part of the Organization of American States, published a report in December calling for an investigation of the Áñez government due to “strong indications of human rights violations” that killed 36 Bolivians. The commission found that violations of human rights were carried out by state agents, with witnesses in two cities telling the IACHR that they were unarmed and security forces fired on them, and several people were killed while simply passing by. A Human Rights Watch report has also accused Áñez’s administration of abusing the country’s judicial system and engaging in a political witch hunt against Morales’s allies who were not threatened out of political office after November 2019.

Additionally, while Bolivia has the third-highest per capita death rate of COVID-19, Áñez’s government failed to provide economic security to the 60 per cent of the population who rely on informal jobs made illegal under the lockdown. While healthcare workers are forced to deal with inadequate resources, including having only a third of the level of intensive care beds recommended by the World Health Organization, Áñez’s chief health minister was arrested for purchasing 179 faulty ventilators from a Spanish company for vastly inflated prices.

Despite multiple reports from international organizations detailing the failure to adhere to democratic principles and the many cases of humanitarian abuse under the Áñez government, there has been little pressure from outside states, who are ultimately responsible for upholding international norms. Contrary to this, after Morales was deposed, international leaders were quick to accept the right-wing, capitalist and unelected Áñez.

Brazillian President Jair Bolsonaro called the situation a “lesson for everyone” and a “win for democracy.” US President Donald Trump followed in Bolsanaro’s path, welcoming Morales’s resignation as “a significant moment for democracy in the Western Hemisphere.” Global Affairs Canada (GAC) spokesman John Babcock stated that Canada would work with and support the Áñez government in its caretaker role until elections are held.

Trump also said that Morales’ resignation sends a strong signal to the “illegitimate regimes” in Venezuela and Nicaragua, despite the fact that Morales won three very convincing victories in 2006, 2009, and 2014. While the legitimacy of Morales’s 2019 electoral victory was questioned, legal scholars and journalists remain divided between describing his subsequent ousting as a coup or popular uprising, which may be surprising given the unequivocal support of Áñez from the United States and Canada.

The largely positive response of Western leaders to the removal of Morales was influential, if not instrumental, in Áñez’s ascendency to power. This factor, in conjunction with the warming of relations between Áñez’s and the Trump administration, helped Morales’ socialist party regain power.

Arce’s victory is an assertion of millions of Bolivians that a clear electoral mandate is stronger than an undemocratically appointed government with close ties to the United States. The victory represents a positive trend for Bolivian democracy, as the MAS democratically contested, and won the Prime Minister’s Office after a year in opposition.

International groups, including the Organization of American States (OAS), have attested to the validity of the elections as well as the lack of any electoral irregularities. After the strong rebuke of an Áñez regime marked by democratic backsliding and economic turmoil, a Bolivia under Arce that enacts sweeping anti-poverty measures, like Morales’, should be a welcome sight around the world.

Featured image by Brasil de Fato and obtained via Flickr under a CC BY- NC-SA 2.0 license.