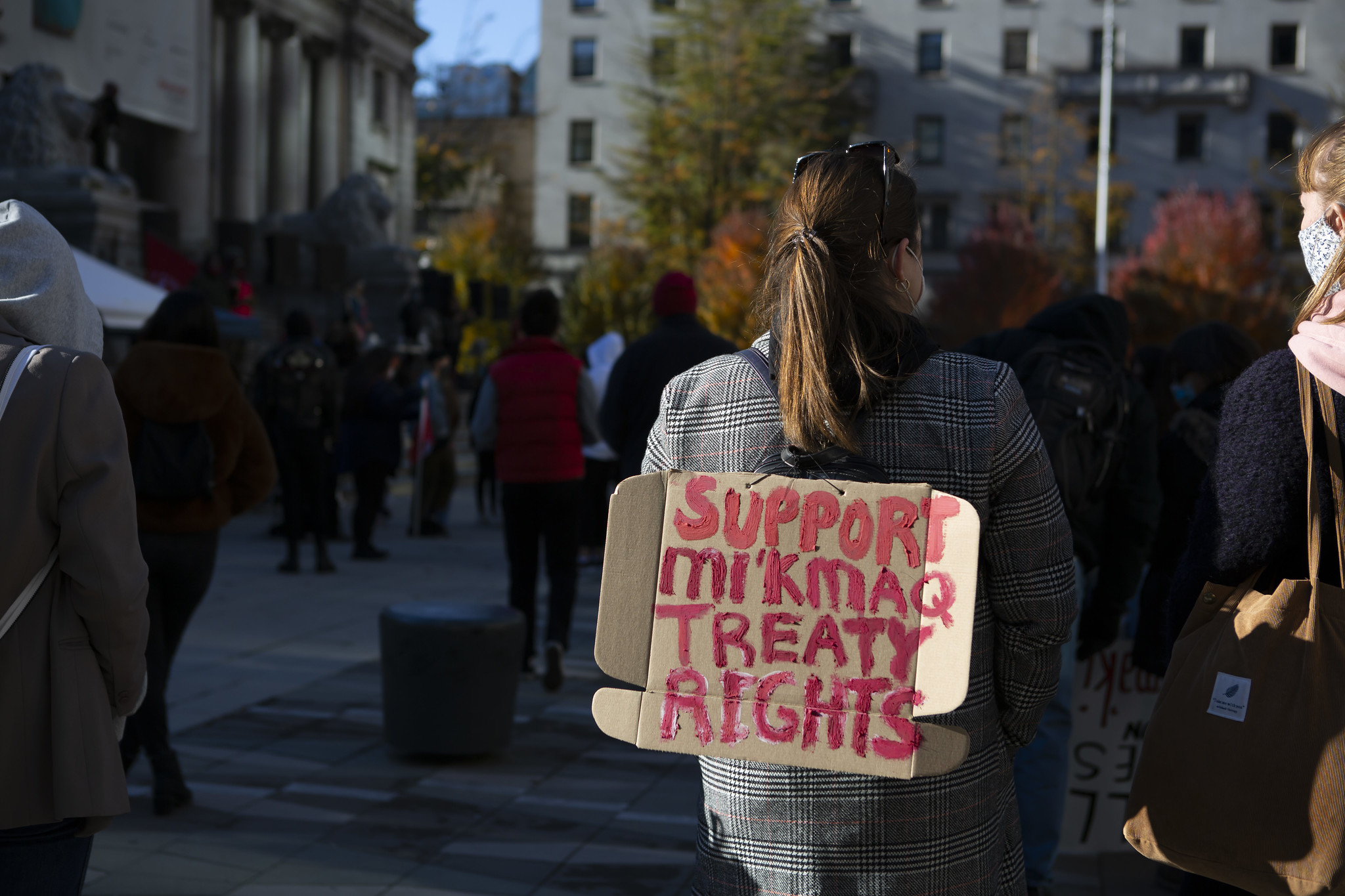 Tensions continue to rise in Nova Scotia between Mi’kmaq Indigenous Peoples and non-Indigenous groups. The conflict stems from a dispute over lobster fishing between commercial fisherman and Mi’kmaq fisherman, which has led to violent attacks and destruction perpetrated against the Mi’kmaq fishermen and their property. Commercial fishermen have targeted Mi’kmaq people for their out of season lobster fishing, arguing that this is a conservation concern, as lobsters need time to repopulate in the off-season. In response, the Mi’kmaq argue that their treaty rights grant them permission to fish during this time. The current situation in Nova Scotia is just one example of a conflict over treaties, highlighting the wider issue of treaty interpretation within Canada.

These treaties are mutual agreements between the Federal government and Indigenous groups, intended to clearly define rights and obligations. Recognized in Section 35 of the Canadian Constitution (and in the United Nations Declaration on the Rights of Indigenous Peoples, which Canada has adopted), treaty rights form the relationship between Indigenous Peoples and the government.

This is not the first major dispute over the infringement of treaty rights in Canada. The 1999 Supreme Court of Canada case R. v Marshall serves as another example of Indigenous people fighting for their treaty rights. In that case, Mi’kmaq fisherman Donald Marshall Jr. argued that it was within his rights to fish for eels when and where he wanted, without a regulated license. This case was centered directly around Indigenous fishing rights, much like the current dispute in Nova Scotia. The Supreme Court of Canada ruled in Marshall’s favour, and found that it was within his treaty rights to fish for a “moderate livelihood.” The Peace and Friendship treaty signed between the Mi’kmaq and the British Crown holds today, granting Mi’kmaq peoples the right to hunt, fish, and gather for the purposes of earning a moderate livelihood.

The Mi’kmaq Indigenous Peoples have stated their plan to engage extensively with their community in order to come to a cohesive interpretation of this treaty right. They argue their fishing is based on the long-held Mi’kmaq philosophy of netukulimk. This refers to a sustainable use of the land and resources, in order to provide themselves and their community with nutrition and economic and spiritual well-being.

Another notable Supreme Court case regarding Indigenous treaty infringements is R. v Morris (2006), which looked at Indigenous hunting rights. In this case, two Indigenous men were accused and convicted of hunting at night using unsafe hunting practices. The Indigenous men argued that their right to hunt at night with the aid of illuminating devices was protected under the North Saanich Treaty. This treaty right was acknowledged by the trial judges. However, this right was interpreted in the present day context and ultimately not accepted. The right to hunt was protected by the treaty; however, the treaty does not protect the right to hunt in a dangerous manner. The Supreme Court noted that at the original time the treaty was signed, night hunting did not pose the same dangers and threats as it does today. This case is a clear example of how interpretations of treaties may need to be altered to fit present day society.

As Mi’kmaq fishermen are currently targeted by commercial fishermen in Nova Scotia, a much larger discussion must be had throughout Canada regarding the upholding of Indigenous treaty rights. The path to reconciliation necessitates respecting Indigenous treaties, along with consistent work between Indigenous Peoples and government officials to define the modern implications of historical treaty rights. Disputes over treaties highlight a larger problem of systemic oppression against Indigenous Peoples; misunderstandings about treaty rights in present day society can lead to anti-Indigenous violence, as in Nova Scotia.

The treaty rights upheld in R. v Marshall and R. v Morris are the same rights being challenged by the Nova Scotia fishermen. Without a concrete definition of moderate livelihood, these sorts of conflict will continue. Moreover, who has the right to determine what constitutes a moderate livelihood? Governments will likely need to work closely with Indigenous groups to refine this definition; this process will require care and respect for Indigenous rights to self-government, self-determination, and administration of their land and resources. As tensions rise over fishing treaty rights once again, it is a reminder of how treaty interpretation can contribute to violence against Indigenous Peoples in Canada.

Photo by GoToVan and obtained via Flickr GoToVan under a CC BY 2.0 License.