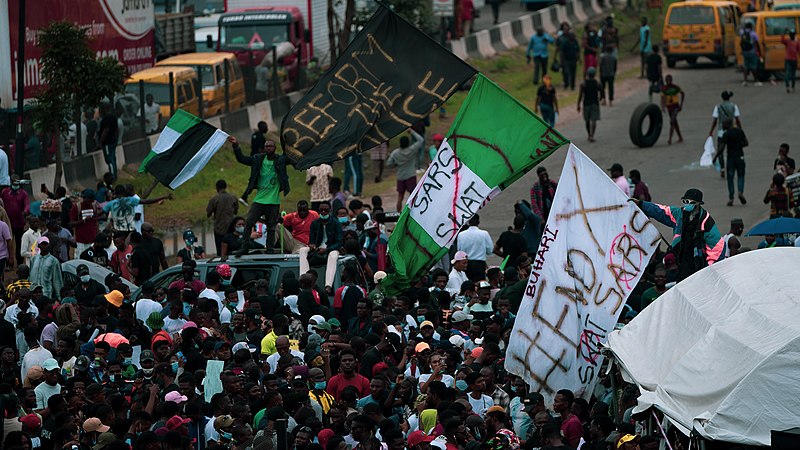 Following more than a week of online outrage and three days of protesting, on October 11th, Nigeria’s Inspector General of Police, Mohammed Adamu, promised to dismantle the Special Anti-Robbery Squad (SARS) and redeploy its officers. However, this move did not satisfy the thousands of young Nigerians protesting against the unit. The demonstrations have since continued, now calling for wider police reform and accountability, providing Nigerian youth the opportunity to demand larger political change from their government.

Established in 1992, SARS was formed to address violent crime in Lagos, Nigeria’s largest city, and later expanded to other regions. The unit’s anonymity, with its lack of identifying badges and uniforms, led to rampant abuse among officers, including incidents of torture, kidnappings, and harassment. SARS officers are also known for targeting well-dressed young people, extorting them for money and electronics, and resorting to violence if they resist. In an incident from October 2015, Awkuzu SARS officers detained a 25-year-old man named Emmanuel and tortured him, including beating and hanging him by his hands, until a local human rights organization intervened for his release.

From January 2017, when the initial #EndSARS campaign began, to May 2020, Amnesty International documented 82 cases of abuse and extrajudicial killings by SARS officers. This June 2020 report follows a September 2016 report detailing a long history of abuse perpetrated by SARS officers.

The recent protests were triggered by local reports on October 3rd that a young man was killed during a traffic stop in Delta State, during which the officers involved are stated to have abandoned the body and stolen the car.

The incident has since sparked a youth-led movement, with thousands of Nigerians taking to the streets to participate in peaceful protests. The protests are out of character for Nigerians — past demonstrations have rarely lasted longer than three days — but analysts and local activists see them as the tipping point for young Nigerians to express their larger frustrations with the government.

In Nigeria, people under 30 account for over 40 percent of the country’s population. Access to proper education is limited for most young Nigerians, which has contributed to the nation’s high youth unemployment rate, estimated to be at 42 percent. Extreme economic inequality is also a major concern for Nigeria’s youth, especially in cities; according to the United Nations Human Rights Council, 70 percent of Nigeria’s population lives below the poverty line.

Dr. Yetunde Omede, a professor of global affairs and political science based in New York state, described further grievances that young Nigerians have against their government including nepotism, electoral fraud, systemic corruption, and inadequate healthcare and infrastructure. For example, Nigeria’s 2019 federal elections included incidents of violence and voter intimidation at the polls.

Throughout these protests, Nigerian youth have effectively mobilized in a variety of ways to support the cause of police reform. One group, Feminist Coalition, a group of young women whose goal is to further Nigerian women’s’ rights, has run particularly successful crowdfunding campaigns to raise funds in support of the protestors. They have shared real-time accounts of their expenditures, and have been praised on social media for their openness and accountability, especially in relation to the Nigerian government. Feminist Coalition, along with other groups, has set up emergency helplines and radio stations, while also paying for the legal, medical, and security fees of protestors.

While the EndSARS protests have largely been peaceful, government responses have become violent, with police and military forces using gunfire, tear gas, and water cannons against demonstrators. On October 20th, the state governor of Lagos ordered a 24-hour curfew and deployed anti-riot police to enforce this mandate. That night, the military response turned particularly violent at the Lekki tollgate in the city of Lagos. The protests at Lekki had been non-violent, with demonstrators praying, singing the national anthem, and staging sit-ins. Despite this, according to Amnesty International, soldiers shot into the crowd, killing 12 protestors.

This event involved the highest number of deaths among protestors throughout the two weeks of demonstrations, although there have been individual killings and beatings of civilians and journalists. The Nigerian state reports that since the protests began, at least 69 people have been killed, the majority of them civilians.

On October 22nd, Nigeria’s Prime Minister Muhhamadu Buhari addressed the nation in light of the ongoing protests. His address failed to mention the recent military shootings at Lekki. Instead, his speech included veiled threats to protestors to stop the demonstrations, stating that if they don’t do so, it “will amount to undermining national security and law and order… Under no circumstances would this be tolerated.” Buhari’s speech was received negatively across the nation, with many believing that it lacked both empathy and accountability for the deaths of Nigerians. However, several protest groups, including Feminist Coalition, took his threats seriously, spreading messages to stop protesting in favor of online mobilization.

The protestors have had some success in pressuring the federal and state governments to agree to their demands. Some concessions from both levels of government include the release of some detained protestors, higher police salaries to curb corruption, psychological and medical assessments for officers, and investigative panels into police brutality. However, the Nigerian government had previously promised to disband SARS four times, casting considerable doubt as to how thorough and effective these reforms will be in actuality.

Whether the protests continue or not remains to be seen, but they have undoubtedly demonstrated young Nigerians’ frustration and anger with the government, as well as their dedication to enacting change. The protests have set the stage for Nigeria’s large youth population to have their voices heard, both within Nigeria and internationally through the use of social media. The success of the protests and online activism in amplifying the voice of Nigerian youth globally reveals young people’s mobilization capabilities, and the possibility they have for effecting political change in the future.

Featured image by Salako Ayoola and obtained via Wikimedia under a CC BY-SA 2.0 license.