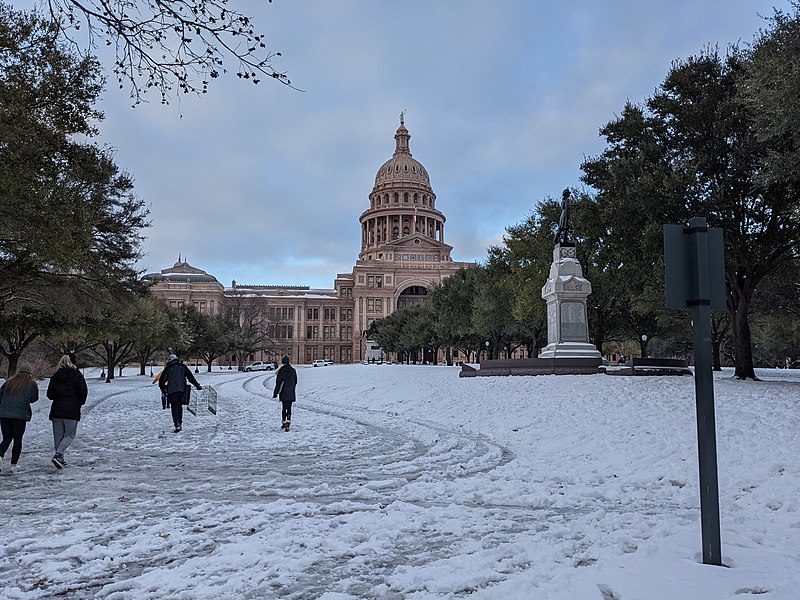 While the winter storm that hit Texas on the night of February 14 is not the first one to affect the state’s power grid, it was unprecedented in its severity and impact, damaging all five of Texas’s power sources. As temperatures dropped below freezing, energy demands in Texas rose and supply fell, leaving millions across the state without power in the week following the storm. While Governor Greg Abbott attributed the power outages to problems with renewable energy and the Green New Deal — something that does not even exist in Texas — the factors that led to Texas’s energy crisis actually have much deeper roots.

In the early 20th century, Texas chose to become the only state in the continental US with its own power grid. Run by the non-profit agency Electric Reliability Council of Texas (ERCOT), the Texas power grid covers most of the state, excluding some border regions. Texas developed its own power system in order to avoid federal power regulations. However, as a result, most of Texas is isolated from external power sources, leaving the system with no outside support in the event of failure.

This explains Texas’s inability to access other states’ power during the storm, but the question remains: why did the Texas power grid fail? The answer lies with privatization and deregulation. In 1999, Texas privatized the state’s power system, giving over control to a combination of energy retailers, private generators, and transmission companies. The decision had bipartisan support, and it overall succeeded in its goal to lower residents’ energy costs. In return, however, the system was deregulated, with fewer rules and safeguards relating to its operation. With no regulation, Texas’s power companies lack the financial incentive to ensure that the system is able to sustain itself during crises, including periods of severe weather.

There are two main ways in which the power generating companies failed to prepare their energy sources for emergency situations, including the recent winter storm. Texas energy equipment is not “winterized,” meaning that it is not properly equipped to handle cold temperatures or inclement weather, such as snow. Although the Federal Energy Regulatory Commission recommended that Texan companies winterize their equipment in light of the grid’s failure during Texas’s 2011 winter storm, upgrades were not enforced. Most companies chose not to perform these upgrades, such as insulating pipes or adding heaters, as it costs time and money that would put them at a competitive disadvantage. In Texas, power companies prioritized providing their customers with cheap energy over reliable, weather-proof infrastructure.

Another consequence of the free energy market is the lack of power reserves for emergency situations. Unlike every other North American power system, the Texas system does not enforce a “reserve margin,” or a supply of extra power that exceeds expected demand. Companies therefore have no reason to keep an excess supply of power, as it would put them at a financial disadvantage as compared to their competitors.

Thus, when the winter storm came, the Texas power grid was not prepared to handle it. Across the grid, windmills and gas and oil pipelines froze, and nuclear power plants went offline. In the winter, Texas is usually able to generate up to 67,000 megawatts of energy, but as of February 17, 46,000 megawatts of power were offline. Contrary to Governor Abbott’s claims, power shortfalls were largely due to the failure of oil and natural gas, which make up the majority of Texas’s power supply. As of February 16, over 4 million customers did not have power, with southeast Texas most affected by power outages.

Even Texans who did have power during the storm were greatly affected by the privatization and deregulation of Texas’s power grid. As a result of the high demand and low supply of energy, Texans saw their energy bills skyrocket. One man, Scott Willoughby, saw his electric bill was 70 times higher than its usual price in the week after the storm. He paid it off at $16,752 USD, nearly emptying his savings accounts in the process.

One power company, Griddy, sells energy to its customers at wholesale prices, making it particularly susceptible to the market’s fluctuations. On February 13, the company told its 29,000 customers to change providers, as people faced bills of around $5000 for the week. However, while many customers tried to switch their energy provider, most of them were unable to do so before their payments were due.

On February 20, Governor Abbott held an emergency meeting with legislators to discuss the abnormally high bills. The next day, he announced that the Public Utility Commission of Texas would tell electricity companies to stop sending bills to customers and enact a temporary moratorium on power disconnection for non-payment of bills. Further, Texas Attorney General Ken Paxton stated that he will investigate energy companies’ emergency plans and pricing, claiming that corporations “grossly mishandled” the power outages.

The winter storm has illustrated a need for a greater regulation of Texas’s energy sector and power grid. This includes enforcing the winterization of equipment and a mandatory energy surplus. Climate change adds another layer to the issue. While it is unclear what exact phenomenon is causing the extreme winter weather in the United States, climate scientists agree that it is a consequence of the warming planet. With climate change escalating, the possibility of unexpected and volatile weather, including winter storms, is heightening as well. In the context of climate change, a total system restructure and equipment upgrade are vital for the Texas power grid, so that it can be prepared to handle extreme weather in the future.

Photo by Jno.Skinner and obtained via Wikimedia Commons under a CC BY-NC 1.0 license.