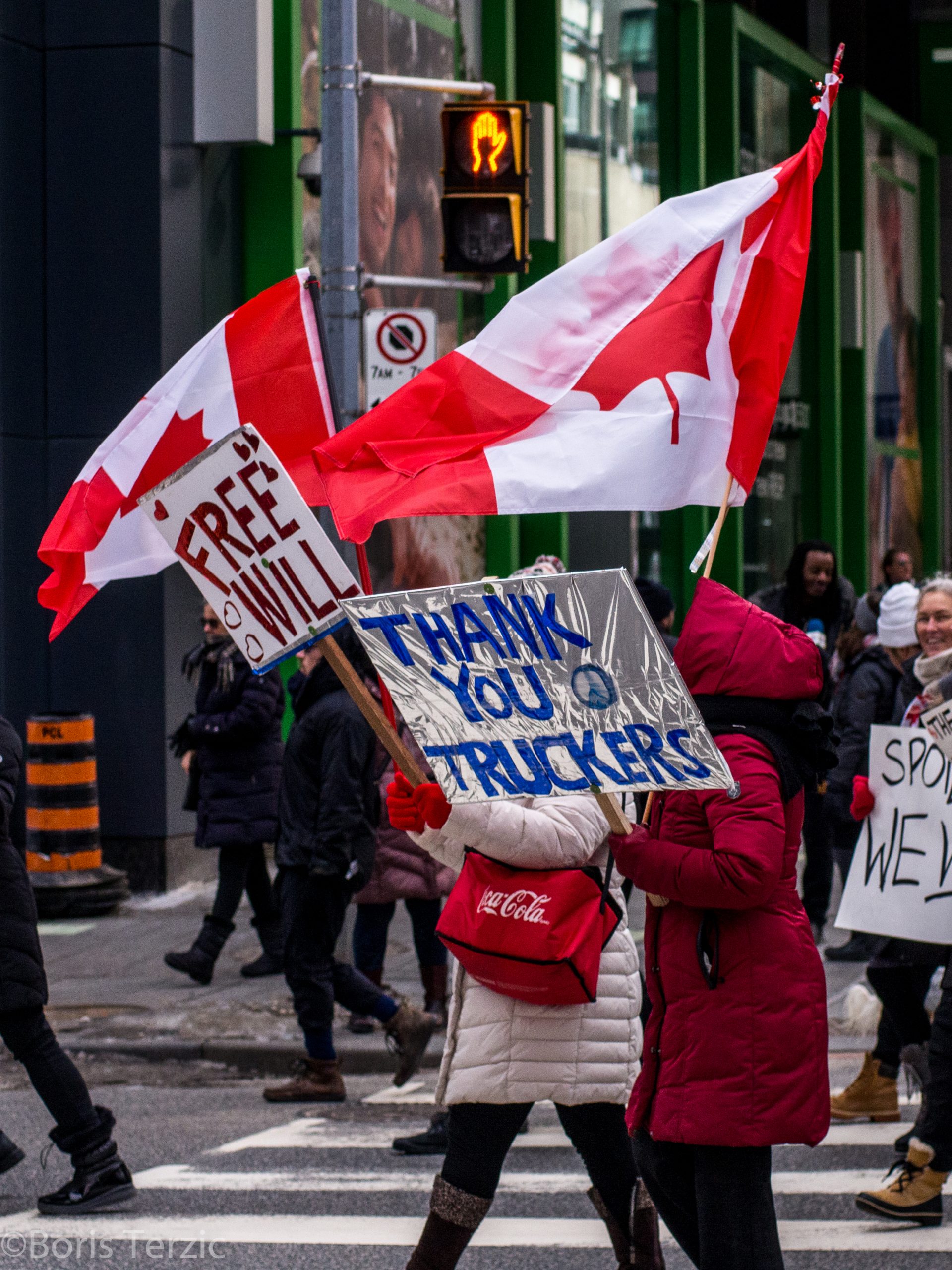 Nearly a month has passed since the start of the ‘Freedom Convoy’ occupation in Ottawa and on Canadian highways. Initially, the movement began as truck drivers protested federal COVID-19 mandates requiring full vaccination before crossing the border into Canada. It expanded into a hostile, militant assembly. Protestors interrupted vital highways for transportation, disrupted citizens of Ottawa, and provoked the province of Ontario to declare a state of emergency. The culmination of this activity resulted in a national plan and the invocation of the Emergency Act.

In Ottawa, the movement has garnered attention from extremist attitudes across the country. On social media, supporters of the protest have expanded the agenda of “freedom” into anti-establishment agendas. Platforms such as GoFundMe and GiveSendGo have linked the Freedom Convoy donation pages to white supremacist and Tea Party movement sympathizers. Downtown, protestors are seen marching with racist and antisemitic flags. This has had an impact on the Jewish community and minority groups who are now fearful for their livelihood as a result of the rise in hateful demonstrations and propaganda in the city. While many protesters may be using these symbols intending to mock the Canadian government’s restrictions, these symbols have brought an overwhelming sense of discrimination, hostility, and violence to the protest. This is not a peaceful, or well-intentioned demonstration.

Local businesses in Ottawa have been forced to close due to the unsafe working conditions of their employees. The homeless population has been consistently harassed, with food being stolen from city shelters, and protestors mocking people requiring welfare services. In the downtown core, workers have been required to stay home, yet cannot concentrate due to the constant noise of the protest. Citizens are fearful across the country for this blatant opposition to democracy. Why did it take the government so long to form an official statement or take action?

It has been made abundantly clear that in Canada, there is a vast disparity in how activists are handled. Relying upon political affiliation, racial status, and cause, Canadian citizens are subject to unfair treatment by government intervention. Those who have been growing restless with current restrictions do have a right to protest, however, it can be observed that when compared to Indigenous activists, their assemblies are handled with higher apprehension by the government towards their dissolution.

Ontario’s Premier, Doug Ford, declared the province to be under a state of emergency on February 11th. This included an increased municipal and provincial police presence, at major highways and border crossings. Most notably, blockades created at the Ambassador Bridge in Windsor (a hotspot for supply chain transportation to and from the United States) were met with an influx of authorities attempting to dissolve the traffic. With pressures placed on the federal government to take action, Prime Minister Trudeau proposed invoking the Emergencies Act. This was a first for Canada, having never been used since its creation in 1985, as an amendment to the War Measures Act. The Act allows Parliament to impose temporary measures to ensure citizens’ safety when national security is under a serious threat. Before February 14th, Ottawa’s hands-off approach to mitigating conflict proves that the pluralist view of Canadian governance builds upon the inequalities amongst people in our society.

While pluralism is an effective method of approaching the diverse interests of Canadians, it does not protect the equal treatment of citizens in the eyes of the law. Canadians must examine the treatment of Indigenous protests across the country to witness the systemic racism and continuous bias which lies in our authoritative structures.

Beginning in early 2020, Wet’suwet’en First Nation protested against the expansion of the Coastal Gaslink pipeline on their lands in British Columbia. Having voiced their legal claim to the land, Hereditary Chiefs, First Nation activists, and supporters were physically removed by the Royal Canadian Mounted Police (RCMP). This raised two important queries. Under section 25 of the Charter of Rights and Freedoms, Indigenous peoples have their unique rights protected insofar as they cannot be amended, nor obstructed by Charter claims. This has had little success in providing clear jurisdictional application, with the continued trespassing of non-Indigenous projects and industrialization of unceded territories. The physical presence of activists surrounding work camps and creating blockades in an attempt to cease construction was met with violence and little support from the federal and provincial governments. Instead of boasting the Truth and Reconciliation progress in beginning to amend the wrongdoings done to Indigenous peoples, the Canadian justice system must first approach present-day struggles that communities like Wet’suwet’en First Nation continue to face. The demonstrated unlawful seizure and arrest of protestors continue to violate section 2(c) of the Charter, which grants all people the right to peaceful assembly. Most recently, Chiefs from the Gidimt’en checkpoint near Kimat BC, have called upon the United Nations (UN) to investigate the continuation of the pipeline project. They cite the UN Declaration of Rights of Indigenous Peoples, which asserts that unceded territories must not be interfered with by external, non-Indigenous organizations.

The hasty occupation of the RCMP and Armed Forces on unceded territories proves that daily interactions amongst Indigenous peoples and the Canadian government are not peaceful, nor just. While federal and provincial governments claim to support communities and fight for fair Indigenous policies, they are far from putting this claim into practice. It is imperative that the system which benefits the many and disparages First Nations communities must be redeveloped into new, fairer methods of dealing with activism.

Although the right to protest in Canada is, and should be upheld within our Constitution, there must be definitive measures set in order to ensure peaceful, productive, and respectful assembly. The Freedom Convoy protestors have demonstrated that their methods are discriminatory, disruptive, and hostile. Wet’suwet’en protestors demanded their right to be respected upon their lands, for their governance to be taken seriously, and for violations of sovereignty to be called out. Their protests were not met with productive approaches of the government to actualize Indigenous needs into public policy. Canada must act now to resolve this unjust double standard of activism.

Image by Boris Terzic and obtained via Flickr Creative Commons.