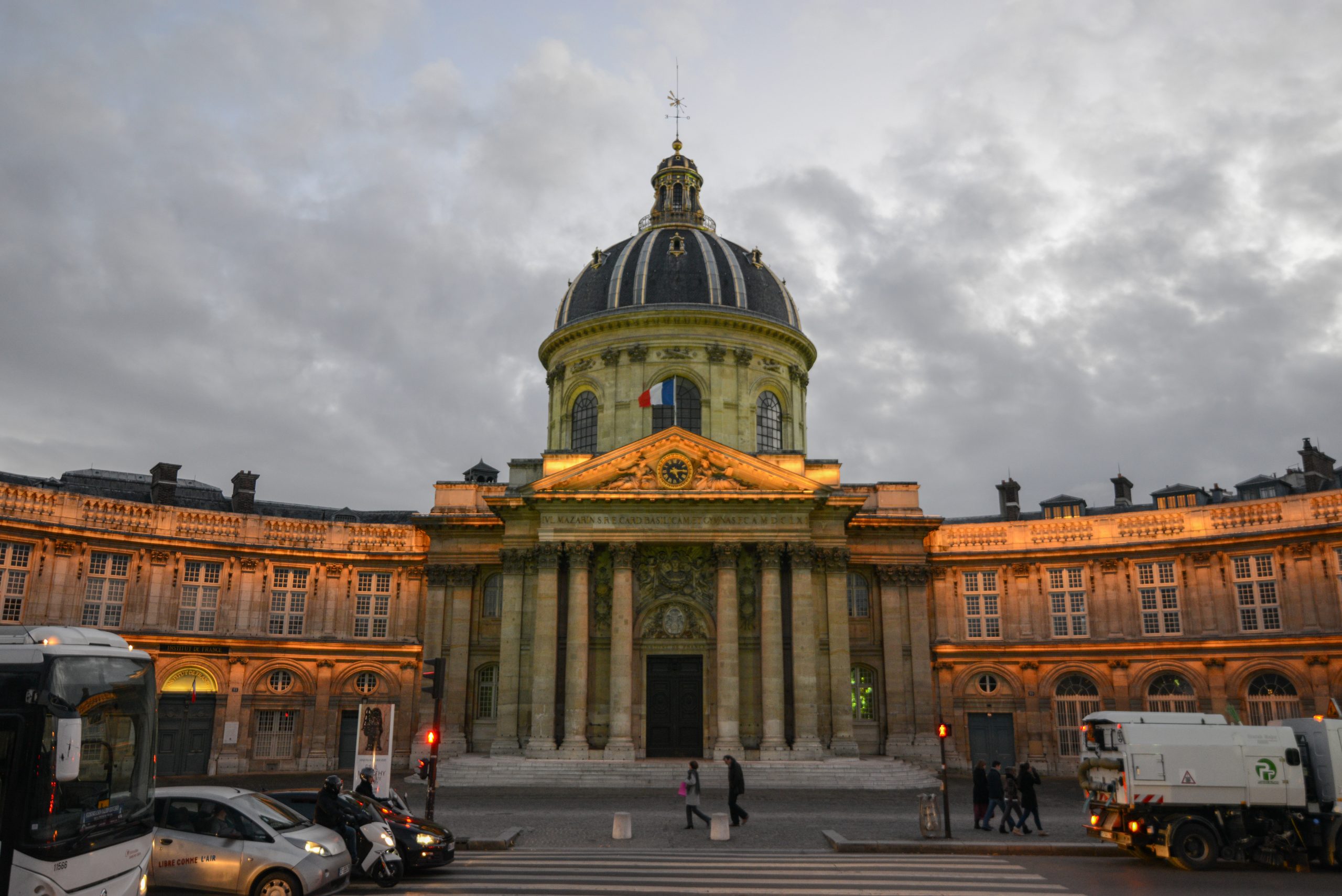 In February, the Académie française, the sacrosanct gatekeeper of the French language, put forth a report alerting public and private actors to the growing use of bilingualism and anglicisms in institutional settings. The 30-page-long document warns against an “invasive anglicisation” of the language. It describes a “worrying” distortion of syntactic conventions, as well as fears that globalized mass communication might blight the French language’s rigid moorings. Linguistic disputes in the country are indicative of a greater, rampant unease about transatlantic cultural “contaminations”. Often associated with an insulated elite, the incorporation of anglicisms into everyday French is at the heart of a leery debate about the preservation of the country’s intellectual traditions. What can French teach us about the French?

Hélène Carrère d’Encausse, the Académie’s Perpetual Secretary, believes the situation has reached a “critical point.” In the report, entitled “Pour que les institutions françaises parlent français”, the body deplores the uptick in anglicized language in online advertising. “Sarthe me up”, “Alors, ready to Ouigo ?”… : the unfortunate puns seem to upset the Académie, who mercilessly shames those responsible for the campaigns. The authors of the report suggest that, bad taste aside, these attempts at humor could “disrupt” the French language.

The growing use of technology and mass communication has led to a rise in popularity of these “hybrid” advertising formulas. This “worrying” evolution is suspected to dwarf the linguistic distinctiveness of French and to blur orthographic conventions. The report fears that this “disruption” might end up reverberating in everyday written French.

The authors note that, in the 20th century, imported foreign words used to be “assimilated”, but that they are now barbarically incorporated into the French syntax. One example is the erasure of prepositions in some anglicised formulas, such as “Manager Travaux” (instead of “Manager des Travaux”). The authors also question the comprehensibility of some phrases and wonder whether customers truly understand the meaning of a “Dailylive 100% compatible social live-streaming.”

The report also points to instances where French words are entirely replaced. For example, the term “follower” usually prevails over “abonné”, “adepte”, “ami”, or other French equivalents. Technology, social media, and marketing strategies are the designated culprits for this uniformization. The report insists that French’s rigidity should be seen as a “strength” rather than a transmutable inconvenience.

Bilingualism, Or a Bureaucratic Monologue?

According to the report, the overuse of anglicisms might also lead to the aggravation of social divides as “a small, privileged and educated fringe of the population” builds up its own linguistic arsenal. The association of opaque anglicisms with a privileged elite is a recurrent gripe. In February, commenting on the Académie’s report, Canadian conservative Mathieu Bock-Côté denounced the denaturing of French by a “new globalized bourgeoisie” and their esoteric lexicon. Due to its common association with a connected, urbanized youth, the newspeak, mainly used in marketing and in “woke”-inspired speeches, has become highly political. Drawing on Quebec’s experience, Bock-Côté warned France against the “progressive orthodoxy”. In addition, the Académie’s report warns against a generational divide, older generations being less proficient in English.

Anglicism and Americanization: Two Sides of the Same Coin?

The report’s concluding lines insist on giving the French culture a “chance” to survive globalization. The use of anglicisms in the political arena is often perceived as a mindless (and menacing) form of  “woke” mimicry. If the grammatical ramifications of these linguistic skirmishes can seem anecdotal, disputes over the French language often correlate with societal debates. In 2021, the introduction of “iel” (a gender-neutral pronoun) in the Robert dictionary had sparked a full-blown controversy. Jean-Michel Blanquer, Emmanuel Macron’s Minister of Education, is notoriously opposed to US-inspired “wokeism”, an “ideology” thought of as the cornerstone of an ideological “contamination”. Commenting on the pronoun’s acknowledgment by the dictionary, Blanquer claimed that such innovations were “not the future of the French language.”

Similarly, “inclusive writing”, or “écriture inclusive”, designed to be gender-inclusive, had precipitated a nation-wide existential dread and was quickly banned in administration by the then Prime Minister Edouard Philippe. In 2021, a decree from Jean-Michel Blanquer prohibited its use in schools. Roselyne Bachelot, the Minister of Culture, deemed the innovation “complicated” and “elitist.”

The French egalitarian philosophy now faces the challenge of adapting to new realities. Assimilation, a perennial feature of the French model, is questioned in light of crystallized disputes over multiculturalism. For Blanquer, “wokeism” is an unenviable path, which feeds “resentment” and emulates “victimization” by focusing on the acknowledgment of systemic discrimination. University campuses have become the main locus of this cultural split, and are often seen as the Trojan horses of “wokeism.” In 2021, Frederique Vidal, the Minister of Higher Education, declared war on “Islamo-leftism”, a now-mainstream neologism designating the alleged fusion between left-leaning speeches and Islamism.

The celebration and preservation of the French language guide France’s coexistence with a globalized world and increased exposure to US-inspired speeches and vocabulary has contributed to a growing feeling of “déclassement” and cultural dispossession. The fear that a complacent stance would trigger a surge in the far-right’s popularity has encouraged the government to overplay its skepticism. Jean-Michel Blanquer analyzes that “in the United States, [“wokeism”] provoked a reaction and led to the rise of Donald Trump.” The nation’s history with the far-right, however, long preceded gender-neutral pronouns. In fact, some suggest that if there is an Americanization of French politics, it is taking place on the other side of the ideological spectrum.

Photo image by Joe Láscar and obtained via Flickr under a  2.0 Generic (CC BY 2.0) License.