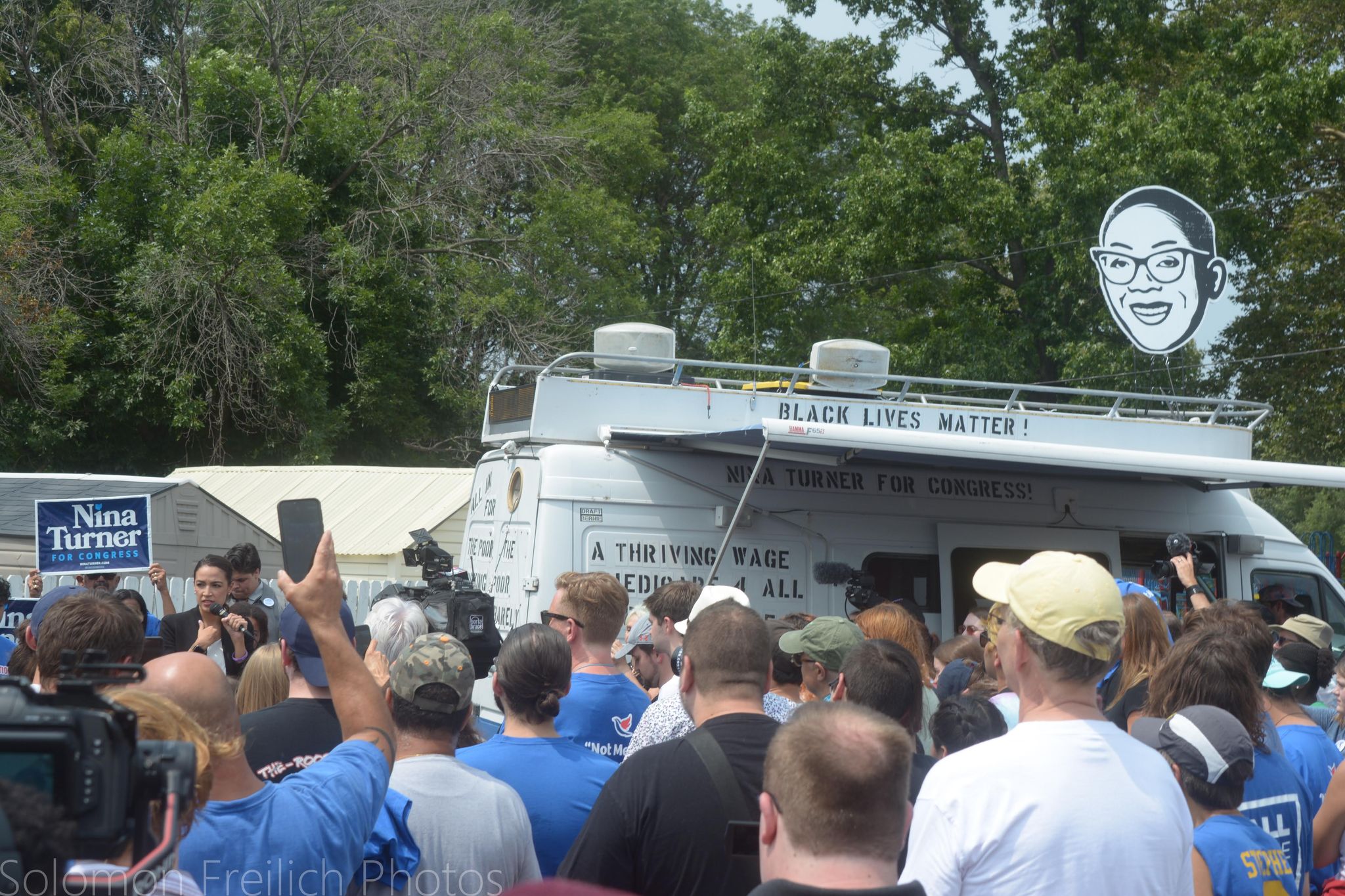 While midterm elections usually promise a whooping for the president’s party and agenda, the 2022 United States midterms are shaping to continue the power struggle between the center and the Left that has cleaved the Democratic Party since Hillary Clinton’s unexpected loss to Donald Trump in 2016. In Philadelphia, insurgent Leftist candidate Alexandra Hunt is running for Congress in PA-03, against Centre-Left incumbent Dwight Evans. Hunt, a public health researcher running on progressive priorities including Medicare for All and the Green New Deal, considers the 6-year incumbent Congressman incapable of standing up and fighting for the health, safety, and prosperity of the marginalized communities he represents. In Texas, progressive attorney Jessica Cisneros, endorsed by Alexandra Ocasio-Cortez and other prominent progressive Democrats, has forced 18-year incumbent Congressman Henry Cuellar (TX-28) into a runoff for the Democratic nomination. Cuellar, with an A rating from the National Rifle Association and the only Democrat in Congress who opposes abortion rights, provides a diametric opposition for Cisneros, backed by national progressive organizations like Justice Democrats and the Working Families Party. Thus, these two primaries, set for May 17 and May 24, will set the tone for a midterms season of intra- as well as inter-party conflict.

Battling out a primary in a safe blue district dominated by an entrenched Democratic machine, Hunt faces long odds in ousting such an institutionally-backed incumbent as Evans. As a 28-year-old progressive public health researcher from Rochester, New York, Hunt represents an ascendant Left in the style of Alexandria Ocasio-Cortez, running an unabashedly reformist campaign focused on bold legislation to benefit the predominantly Black, female, and impoverished district of PA-03. The daughter of two teachers, Hunt noticed inequities between the inner city where she grew up and the suburban districts where she attended school. Hunt worked as a waitress and a stripper during her undergraduate years at the University of Richmond, and draws on this experience to advocate for the decriminalization of sex work. After earning her Master’s degree in Public Health from Drexel University, Hunt stayed in Philadelphia and began volunteering and organizing in the community in the wake of the COVID-19 pandemic. She decided to run for Congress while volunteering at a soup kitchen and watching a seemingly endless line of impoverished Philadelphians abandoned by their elected officials.

The current incumbent, Dwight Evans, was born and raised in Philadelphia and first elected to the Pennsylvania House of Representatives in 1980. Evans has voted in line with his party on most issues since his election to Congress in 2016, and has faced minimal opposition in 2018 and 2020. Evans has invested in oil and gas, drawing criticism from Hunt and other progressives arguing that this affects his action, or lack thereof, on climate change. Hunt, in her own reasoning, is running not because of any particular action of Evans, but a lack of bold action at the scale needed by his constituents. While Evans has supported and co-sponsored Medicare For All, when the bill came to a vote he failed to support it, citing timeline issues. Hunt aims to bring proactive and daring legislation to Congress, in contrast to the more Centre-leaning incumbent. However, it merits mention that PA-03 is the most Democratic district in the country, with 82% of the district registered Democratic. Thus, while Hunt and Evans certainly possess key differences in political orientation, the district is safely Democratic, rendering Hunt’s challenge aimed towards continuing to push the Democratic caucus as a whole to the Left, rather than a pragmatic and immediate concern to put forth a strong Democrat to face a Republican challenge.

On the other hand, the Cuellar-Cisneros race in Texas takes place in a Democratic-leaning district threatened by a rising tide of GOP turnout. Incumbent Democrat Cuellar won only 58% of the vote in 2020 against a GOP challenger, rendering him more vulnerable in 2022. Centrist Democrats argue that Cisneros is too liberal for the district, and if she were to win the Democratic nomination, the seat would go red in November. Cuellar is one of the most conservative Democrats in the House, opposing abortion rights and supporting immigration reforms that would quicken deportation of unaccompanied minors. Cisneros’ campaign contends that voters in the district support progressive policies, but don’t make it out to vote. National progressives, including Senator Elizabeth Warren and Progressive Caucus Chair Congresswoman Pramila Jayapal, have campaigned on Cisneros’ behalf in Texas. As a result of this national prominence, Cisneros has also become a lightning rod for criticism from centrists who blame leftist Democrats for driving away suburban swing voters with sweeping and expensive policies such as Medicare for All. In a district that could potentially go red in November, Cuellar argues that “far Left celebrities’” are out of touch with his constituents, and draws on national centrist rhetoric that focuses on “kitchen table” policies rather than larger social and redistributive reforms. The Cuellar-Cisneros contest, in contrast to the Hunt-Evans race, takes place in a more competitive partisan environment, and thus plays into centrist motivation to ensure that the seat remains blue, rather than allowing for intra-party ideological conflict without fear of losing a seat.

Shaping the context of both races is an influx of retirements by Democratic incumbents and newly redrawn districts following the 2020 census. Over 30 Democratic Congresspeople are retiring, a decision frequently made when one’s party expects to lose the majority, given that members of Congress often stick around for as long as they expect to hold the power to set the agenda and run committees. However, most of these retiring Democrats represent safely blue seats, eliminating uncertainty regarding the party of their replacement, but rather the intra-party ideological position of this replacement. Open seats often prove helpful to insurgent candidates on the Left, who no longer have to battle with the advantage of incumbency and can run on ideas and principles alone. Redrawn districts create new seats without incumbents, and that are often more balanced and less gerrymandered than the previous districts. Thus, in 2022, many on the Left hope to seize these openings within the caucus to elect leftists, even if the party as a whole is marginalized in the minority. While, according to this orientation, newly elected leftist Democrats may not have much power during their first term, ideally when the electoral tide lifts all Democratic boats and they return to the majority, these leftist members will have the benefit of incumbency and experience and can use this power to advance a progressive agenda. However, this process is likely to play out over the next few electoral cycles, and could very well result in dramatic losses for Democrats as a whole in 2022, which moderates are attempting to avoid by steering away from larger redistributive policies and towards working within existing policy frameworks to deliver some practical benefits to voters.
As demonstrated by leftists’ longer-term orientation and moderates’ more immediate focus on 2022, the midterm elections are a showdown not only ideologically, but strategically. Whereas moderates see incumbent retirements as a harbinger of poor midterm performance, leftists see these open seats as opportunities to lay the foundation for a progressive network in the future. Moderates are focused on staunching immediate losses, whereas progressives aim to take advantage of a lack of Democratic incumbents to elect members who may have limited power in the minority now, but will have the advantage of incumbency in future electoral cycles where Democrats may regain control. While all those under the Democratic umbrella desire power and influence for their party, in addition to ideological cleavages, the Centre and the Left possess fundamentally different temporal orientations and electoral priorities.

Photo by Solomon Freilich and obtained via Flickr under a Attribution 2.0 Generic (CC BY 2.0) License