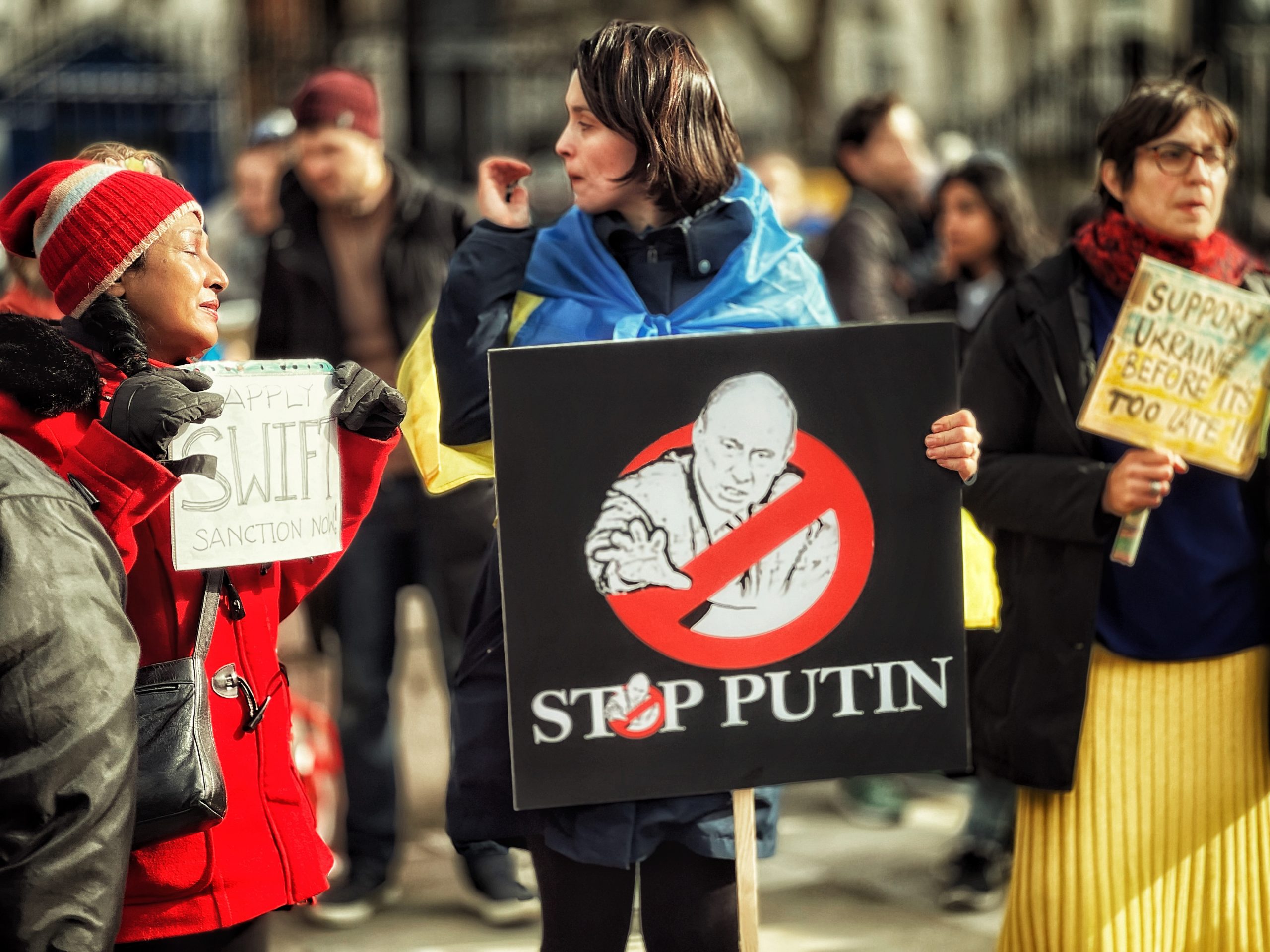 Since he came to power in 2000, Putin has dreamed of a world where Russia was on the global stage; to bring back the “triumphant” Soviet days. His goal appears to be for Russia to achieve global hegemony, retrieving the long-lost influence of the Soviet Union and overcoming Western dominance.  Perhaps most of all, Putin has sought to leave his mark in history — something he has achieved in the most destructive of ways, consolidating much of the world —  including a large proportion of the Russian population — against him. In fact, the war that Putin launched on Ukraine, in February of 2022 could constitute the beginning of the end of his regime.

The war on Ukraine was far from being a rational decision by Putin. The Russian president was planning a blitzkrieg — a rapid military takeover of the capital city Kyiv and the southern and left-bank of Ukraine. This initiative would seek to take the enemy by surprise without inflicting the massive costs on the Russian side that a normal ground war would. However, Putin’s expectations were not met, as he underestimated the resolve and the determination of the Ukrainian military and even that of Ukrainian citizens. They were prepared and armed with weapons distributed by NATO powers to face the invasion.

Consequently, both the Ukrainian army and civilians were able to slow and delay the Russian attacks. They were even capable of deteriorating the morale of Russian troops, killing thousands of them, according to Ukrainian president Volodymyr Zelensky. Moreover, the local Ukrainian population that had already experienced a similar invasive attack on a smaller scale of the Crimea in 2014 was materially prepared to face the enemy as videos on social media show civilians receiving firearms and preparing Molotov cocktails to defend their homes.

As a result of these factors, the blitzkrieg plan quickly went awry and Putin decided to further pursue his failed military operation by escalating the conflict and bombing major cities, including civilian areas — breaking international law rather than withdrawing and risking the appearance of weakness. With the pursuit of the operation and its expansion, massive unexpected costs are being inflicted on the Russian army, not only in terms of human losses, but in terms of the material costs of war. Russian troops are facing shortages in food and fuel provisions that are making it harder for them to pursue their military attacks and are constraining their capacity to expand their operations beyond Kyiv.

Towards a collapse of the Russian economy:

As soon as Russia’s invasion of Ukraine began, much of the international community propelled the imposition of economic sanctions on Russia, ranging from blocking Russian exports to freezing the assets of Russian billionaires and of Putin himself in international banks. As such, the Ukrainian war has left Russia in a worse and more isolated situation than it occupied before the war it started. In a globalized economy that largely relies on international trade, the Russian economy is at high risk.  In contrast  to Putin’s aspirations of hegemony and world leadership, Russia is currently suffering from the economic difficulties of a devastating war. This has denied Putin’s any remaining opportunities of support by large sectors of the Russian population on which the massive costs of war have been inflicted.

Who pays the cost of the war?

Putin also micalculated the Russian public’s reaction to the attacks on Ukraine. Although many Russians supported the Russian invasion of Crimea in 2014, today most Russians oppose the ongoing invasion of Ukraine. Not only are Russians not generally supportive of the Ukrainian war because of its much larger scale with higher stakes and severe economic consequences, but also because Ukraine was part of the Soviet Union — many Russians have family members in the country whose safety they fear for.

Moreover, even Russians who were supportive of Putin’s decision to attack Ukraine felt deceived by the rapid failure of the Russian blitzkrieg and the transformation of the conflict into costly ground warfare, with a death toll only getting higher on both sides. Although Russian media and officials attempt to obscure the real number of deaths in Russian troops, Ukrainian officials declared that it was in the thousands, an estimate that might have negatively affected the remaining support for the war.

However, perhaps the biggest cost that the Russian public has to pay is facing the hardships caused by the economic sanctions imposed on Russia. Many international companies have suspended their activities in Russia and the country’s export sector is collapsing. This is notably the case of natural gas exports which are one of the crucial pillars upon which stands the Russian economy. Its main importers are European countries looking for temporary alternative sources. Additionally, the United States imposed an embargo on Russian gas exports on March 8.

As a result of the blocking of Russian oil and gas exports, the Russian economy may contract by 14 per cent in 2022. Besides, earnings from the tourism sector have been disrupted as travel into Russia has become unauthorized by many countries, notably the United States. The ripple effects of the war, negatively impacting the main sectors of the Russian economy, have impeded the livelihood of many Russians that are dependent on these sectors for their survival.

The war is also a media war, in which the Russian population’s quasi-non-existent freedom of speech under Putin’s autocracy is being further repressed. In fact, Putin blocked Russians’ access to Facebook and enacted a law to punish those transmitting any narrative opposing the war on Ukraine under the pretext of halting the spread of “false information”. In addition, Putin ordered the bombings of the Ukrainian TV tower to block the transmission of news regarding the invasion and to cut Ukraine’s connection with the outside world. Despite the heavy repression, many Russians took to the streets in anti-war protests.

The decision to launch an attack on Ukraine was miscalculated as Putin’s closest allies, notably China and India, were not in favor this time of his decisions. Although neither state has admitted support for Ukraine, they have not explicitly declared support for the Russian position either. For example, China and India both abstained from voting on a United Nations General Assembly resolution that demanded the withdrawal of Russian troops from Ukraine instead of voting against it. Other than being supported by the regimes of North Korea, Eritrea, Syria, and Moscow’s puppet regime in Belarus, Russia’s traditional allies are not willing to demonstrate open support of the invasion to avoid entering into a conflict with Western states.

By backing Russian decisions, the North Korean regime will not be economically hurt as it has already been excluded from the international globalized system and it relies on its closed economy. Conversely, the importance of global trade and economic interdependence make such a stance particularly risky for nations like China and India. Thus, in the Ukrainian war, Russia is standing alone with no international support,a situation reminiscent of scenes of panic of the Cold War after Russia put its nuclear deterrence capacities on alert.

Last resort: Breaking the Nuclear TabooDenied both external and domestic support as well as facing a severe economic collapse, Putin has resorted to the “ultima ratio”  —the last hope— of nuclear escalation. Putin is considering any further sanctions on Russia as equivalent to a declaration of war against the country, which, alongside putting Russian nuclear deterrence capacities on alert, suggest the possibility of nuclear escalation. Putin’s statement, breaking the nuclear taboo that has existed since the Cuban missile crisis in 1962, highlights Putin’s weak position that made him prefer the threat of mutually assured destruction rather than admitting his failure by withdrawing his troops. In other words, for Putin, the stakes attached to a Russian withdrawal are higher than ever since he is now perceived as a war criminal, breaking international and humanitarian laws by bombarding civilians. As a way out of the crisis is still uncertain for Ukraine, and a nuclear crisis is not improbable, the world holds its breath.