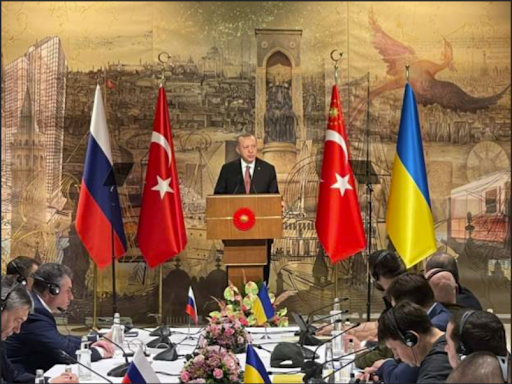 In light of the ongoing war in Ukraine, the Western world has sought unity in the face of Russian aggression. The European Union (EU) and the United States (US) chose to implement unprecedented sanctions to weaken Russia’s economy. The conflict has also inspired the revival of the North Atlantic Treaty Organization (NATO) which hopes to deter Russia from further aggression.

But while almost all of NATO’s thirty members agree with the strategy of fully supporting the Ukrainian government, Turkey, one of the alliance’s most powerful members, has not. Turkey has been the only member to not adopt sanctions agreed upon by the EU and the US, taking a more moderate position towards the conflict, and has been the only state consistently capable of bringing Russian and Ukrainian officials to the negotiating table. Yet, Turkey’s choice to stand back from NATO could considerably hinder the West’s strategy in resolving the conflict.

Maintaining communications with Russia while proving its commitment to NATO and Ukraine is a balancing act that Turkey has managed fairly well since the start of the conflict. To make this intermediary role work, Turkish President Recep Tayyip Erdogan has had to somewhat align his country with Ukraine and the Western coalition, even while opposing stronger measures against Russia, such as sanctions. As a result, Turkey voted in favor of a UN General Assembly resolution condemning Russia’s invasion, and, a month later, supported Russia’s exclusion from the UN Human Rights Council. Turkey also closed the Bosphorus strait to military vessels to promote de-escalation.

While Ukraine’s President Volodymyr Zelensky has praised Turkey’s actions, Erdogan has been cautious not to anger the Kremlin. Indeed, Turkey is currently NATO’s odd duck. Recently, it was the only member of the alliance to oppose the accession of Sweden and Finland to NATO, only giving a green light at the cost of political concessions by the applicant states. Turkey also did not economically sanction Russia and has left its airspace open for Russian flights. Even though Turkey’s reluctance to apply strong sanctions is partly caused by its energy and food dependency on Russia, the state’s careful approach also reflects domestic political concerns.

Turkey’s neutrality on the Russian invasion of Ukraine is part of the government’s renewed geopolitical strategy. Inspired by the precepts of the former Turkish foreign affairs minister Ahmet Davutoglu, this new approach is marked by the use of soft power and attempts to maintain cooperative and peaceful relations with its neighbors. In this light, Turkey has improved relations with long-time enemies such as the United Arab Emirates and Saudi Arabia. In March, Israel’s president visited Istanbul to demonstrate a renewed relationship after years of turbulence between the two countries. A few days later, he was followed by the Greek Prime Minister, which is notable due to continued tensions between Turkey and Greece over their shared border.

Domestic politics are a major reason for Erdogan’s diplomatic efforts. To unify his electorate in light of the presidential elections coming in 2023, Erdogan has had no choice but to play the card of peacebuilder over troublemaker. His strong commitment to diplomacy aims to restore his tarnished image which has been harmed by economic instability that lowered the Turks’ purchasing power. So far, these efforts seem to be succeeding, as the Turkish public opinion has overwhelmingly backed the government’s stance. Thus, it is clearly in Erdogan’s best interest to play a balancing role between NATO and the two parties at the heart of the conflict.

The clear commitment of Western countries in favor of Ukraine and the non-involvement of major emerging powers like India or Brazil has allowed Turkey to propel itself to the forefront of international discussions. The country’s role in recent negotiations has upstaged France, which was originally at the frontline to dissuade Russia from attacking before the conflict broke out. Indeed, French President Macron initially led European diplomatic efforts in numerous meetings with his Russian counterpart Vladimir Putin, but the introduced sanctions have propelled France onto Russia’s list of unfriendly countries, a list that does not feature Turkey’s name.

While Macron and Erdogan have adopted a more rational approach in their mediation efforts, other Western leaders have opted for a more radical position toward Russia. America’s President Biden is the best example of this, as the United States has adopted hard sanctions and abandoned diplomatic talks. The American president has been extremely critical of Putin in public speeches, calling him a butcher and stating that he should not remain in power. This certainly did not help de-escalation efforts, and it has even highlighted contradictions in the way the Western coalition responds to the crisis, with President Macron publicly urging the US president to show more restraint.

The Western response to Putin’s invasion, then, has been more fragmented than the coalition wanted the world to believe, paving the way for Turkey to play a prominent role in current negotiations and in a future peace settlement.

Towards a New World Order?

Historically, the US has often presented itself as the world’s policeman. However, the recent domestic troubles at home, best displayed by the storming of the US Capitol, have brought about cautiousness in American foreign policy. The EU is also experiencing hardships as post-Brexit unity is hard to maintain in the face of nationalist governments like Poland and Hungary causing internal strife. As dissatisfaction grows among developing countries regarding Western global governance, potential new powers like Turkey now have room to step up and play a more prominent role in international affairs.