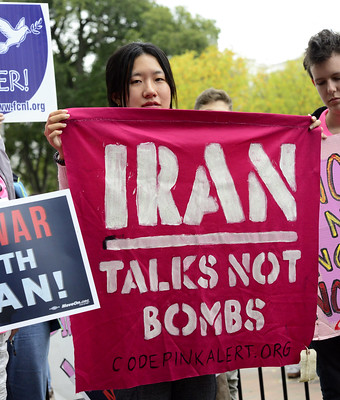 In 2015, Iran reached an agreement, known as the Joint Comprehensive Plan of Action (JCPOA), with major powers, including the United States, to ensure the civilian character of Iran’s nuclear program in exchange for easing sanctions against Tehran. Three years later, however, then President Donald Trump unilaterally withdrew the United States from the deal and reinstated economic sanctions against Iran. In retaliation, Iran has begun backtracking on its commitments dictated by this agreement. Negotiations began in April 2021 in Vienna between Iran and the major powers to reintegrate the United States into the agreement and bring Iran back to respecting its commitments in exchange for the lifting of American sanctions, but they are suspended since March 2022.

Indirect talks took place at the end of June in Doha between Washington and Tehran through the European Union, but again they did not show any progress. Tehran and Washington blame each other for the impasse. Iran has accused Washington of intervening in its internal affairs, an apparent allusion to a request by Tehran to remove the Revolutionary Guards, the ideological army of the Islamic Republic, from the list American terrorist organizations.

Attempting to stir up stagnant water, the European Union called for the resumption of the Vienna talks in August 2022 to settle remaining differences between the United States and Iran as part of international efforts to restore the JCPOA. The indirect American-Iranian talks in Vienna, led by the European Union, resulted in a “final” paper on August 8, 2022, upon which agreement is yet to be determined.

Although it is the United States that reneged and withdrew from the 2015 deal, reaching an agreement with Iran today would be in the Biden’s administration’s interest, especially in the midst of an environment of global uncertainty and crisis since the Russo-Ukrainian war.

Reaching a deal with Iran could help increase the popularity and the approval rate of President Biden and his administration, which have been decreasing since the latter came to office in 2020 because of the pandemic and the state of economic decline that the United States has been experiencing, notably because of the pandemic. Although reaching a deal with Iran would anger the Republicans, many Americans and the majority of Democrats have been waiting for the revival of negotiations with Iran and therefore the resumption of the 2015 deal, which Trump withdrew from in 2018.

By the same token, President Biden’s administration, in office since 2020, is expected not only by Americans but by major powers also, notably the European Union, to reach a deal and put an end to the stagnant negotiations when it comes to such a sensitive issue, in which the stakes are high and a nuclear war is not unthinkable.

Moreover, walking away from the negotiating table for the second time, after Trump pulled out of the 2015 deal, would alter the image of the United States as a world leader and a superpower. In other words, if the United States fails to reach agreement with Iran, the former’s credibility to maintain its commitments would be hindered. Consequently, one of Iran’s arguments-that the United States fails to maintain its commitments from one administration to another- would gain attire and thus would impact not only American credibility at the world stage but also that of the West in general in facing Russia at a time of global uncertainty and crisis caused by the Russo-Ukrainian war.

A world in crisis: avoid a new war

At a time of global uncertainty and crisis caused by the Russo-Ukrainian war and the Sino-Taiwanese rivalries, the United States as a superpower should avoid another regional war at any cost. In fact, failing to reach a deal with Iran through the “final offer”, the closed bid, proposed by the European Union, while continuing the imposition of sanctions on Tehran, would only be sowing the seeds of war in the region. Put differently, the failure of the deal would further encourage Iran to pursue the development of its nuclear program, which could threaten Israel and the latter could retaliate in self-defense.

However, the United States is a strategic partner of Israel, especially after the signing by President Biden and Israeli Prime Minister Yair Lapid of the “Jerusalem Declaration” on the strategic partnership between the United States and Israel, in July 2022. The two countries have thus formed a common front against Tehran to ensure that Iran never acquires nuclear weapons. The “Jerusalem Declaration” emphasizes that the United States pledges to preserve and enhance Israel’s ability to deter its enemies and defend itself against any threat. Hence, the United States would likely intervene militarily in the region if Israel, provoked by Iran, uses its right to self-defense. Thus, a regional war could rapidly erupt in the case of the failure of negotiations.

Although Iran has little chances of winning a war against the United States and its allies, the latter’s advanced ballistic missile capacity and proxies could cause many casualties for the United States and its allies. Moreover, the failure of past American military interventions in the region like in Iraq in 2003, that negatively impacted the American image and resulted in instability and tensions should work as a deterrent for a new American intervention. Hence it should be in the American interest to reach a deal in order to avoid another war at any cost.

On the other side, Trump’s “maximum pressure” strategy seems to have failed since the sanctions imposed on Iran have not prevented it from developing its atomic program and establishing partnerships with its allies. In fact, despite the resumption of sanctions on Iranian oil exports in 2018, China and India continue to buy Iranian oil, in addition to Russian support. Moreover, the reintroduction of Iranian oil in global markets would help reduce the high energy prices brought on by Russia’s invasion of Ukraine. Hence Iran holds leverage over the United States and the West in general. Therefore, since Iran has been able to get around the sanctions imposed by Washington, the latter has no interest in maintaining a failed strategy, but instead should opt to reach agreement to avoid a costly regional war.

A failure to return to the deal would further amplify the uncertainty about the Iranian nuclear capacities, impeding the initial goal of the deal which is the limiting of nuclear proliferation to guarantee peace and security in the region and avoid war. Already in June 2022, Iran informed the International Atomic Energy Agency (IAEA) that it would remove 27 surveillance cameras that monitor its nuclear sites, that were installed as part of the 2015 deal, to pressure its negotiators and impose its demands. The decision, described as a “fatal blow” by Rafael Grossi, the Director General of the IAEA, gives Iran a green light to pursue its nuclear project without surveillance, crossing the threshold and threatening its neighbors, which could be read as a signal of war by some, notably Israel and consequently its ally, the United States. All in all, in the eyes of the United States, and the West in general, Iran is a rogue state that should be dealt with with caution. After years of stagnant negotiations, maybe the time has come to make a decision. Failure to reach a deal with Iran would not be in the interest of the United States. Not only a failed deal would attract American criticism of the Biden Administration, but it would also drive the country into a costly regional war, in a region already torn by conflicts and a world in deep political and economic crises. Hence considering reaching a deal with Iran would likely be in the interest of not only the United States, but the whole world, as any alternative would be an “Iranian bomb or bombing Iran” as threatened  the International Crisis Group’s Iran Project Director Ali Vaez.

Featured Image by Stephen Melkisethian and obtained via Flickr under a Creative Commons Attribution 2.0 Generic license.