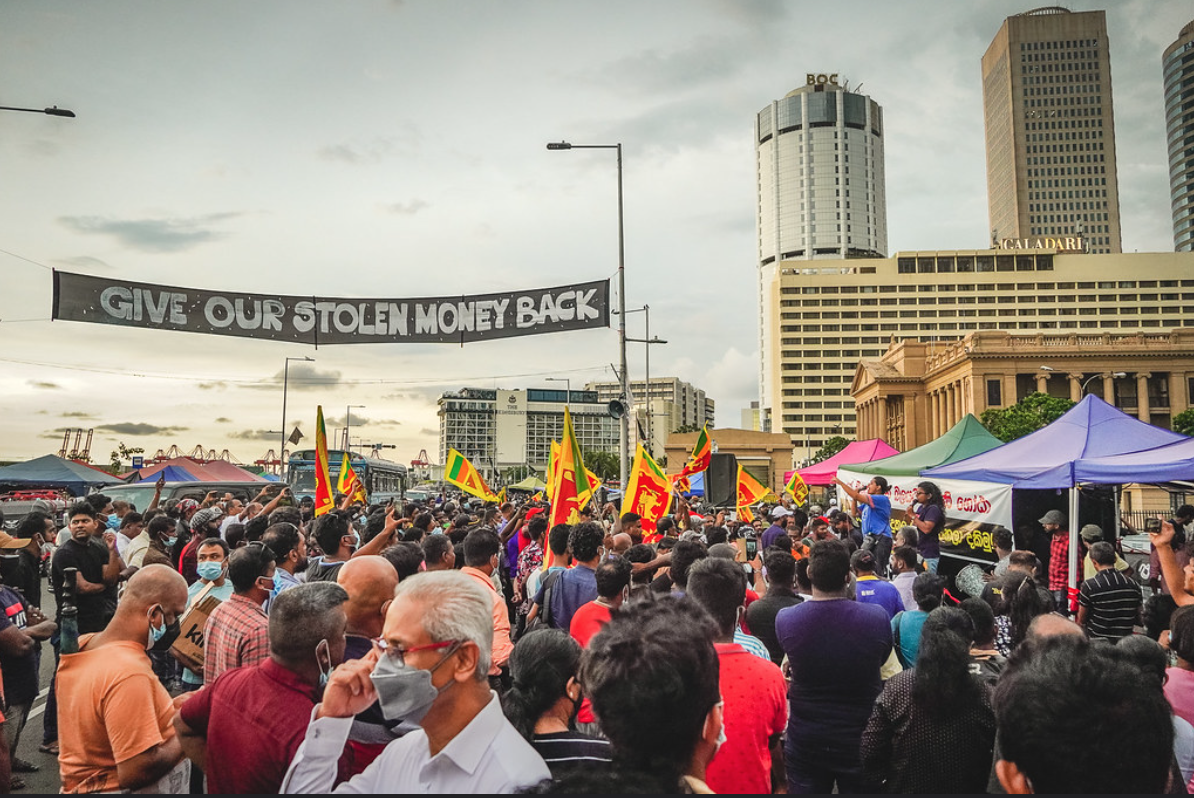 In 2022, Sri Lanka, an island nation of 22 million inhabitants to the south of India, suffered its worst crisis since its independence in 1947. Months of mass protests culminated in the storming of the Presidential residence in early July, forcing President Gotabaya Rajapaksa to resign and flee abroad. A sitting president being ousted by street protests is unprecedented in Sri Lanka’s post-independence history and the country now finds itself at a crossroads.

The crisis originated from long-lasting public finance mismanagements by successive governments. When Rajapaksa came to power in 2019, he enacted significant tax cuts, a popular reform in the short-run but that eventually decreased government revenue. When the COVID pandemic struck months later, Sri Lanka’s sources of revenue, such as remittances and tourism, were wiped out. The crisis then began to affect the public, with frequent blackouts, medicine shortages, and endless queues at oil stations which are now controlled by the army. Inflation in June 2022 even reached 54.6%. To avoid bankruptcy, Rajapaksa knocked on the doors of China and India, two world powers competing for hegemony on the regional scale.

Historically, the bilateral relations between China and India were peaceful and marked by a common front against the West. India even was the first non-communist Asian country to establish diplomatic relations with the People’s Republic of China. However, tensions arose from border disputes in the Himalayas that culminated in a war in 1962. India remains bitter about the humiliating defeat it suffered, and tensions still persist at the heavily militarized border. Today, as the two most populous countries and respectively the world’s 2nd and 5th largest GDPs, China and India wage a war of influence to assert their regional hegemony.

India has therefore moved away from China as it is now a close ally of Japan, with which the Middle Kingdom seems irreconcilable, and a member of the Quad, a US-led Pacific coalition to contain China’s regional influence.

For its part, China has pursued a strategy to isolate India on its own. The New Silk Road, unveiled by Xi Jinping in 2013, is a mammoth project to develop land and sea infrastructures to connect with Europe through Africa and Central Asia. The aim is economic, facilitating commercial exchanges with those regions, but also diplomatic, as the project has been designed to wilfully include or exclude some countries. Thus, rather than going through India, China has set up a circumvention strategy, the “string of pearls”, with a road avoiding it to the North by Pakistan and a sea route bypassing it to the South by… Sri Lanka. The strategic importance of this island is thus obvious in the eyes of Beijing.

Still, China is aware that this effort is astonishingly costly and that most countries from Africa and Central Asia do not have the funds to finance these infrastructure projects. Thus, the initiative induces massive loans to those countries that are used to pay the Chinese construction firms that Beijing sends on site. Then, if a government defaults, China finds other ways to collect those debts, often by taking control of the site. In Sri Lanka in 2015, this “debt trap diplomacy” allowed China to take control of the main commercial port of the country for the next 99 years, a port initially built thanks to a Chinese loan that the Sri Lankan government was no longer able to repay.

So, for China, the further $1.5 billion granted to Sri Lanka in late 2021 is a means to ensure the country’s viability because the “string of pearls” is threatened. On the other hand, New Delhi’s support of up to $3.5 billion in 2022 is meant to regain influence on the island to curb the Chinese strategy.

A Dreadful Fear of the IMF

Yet, another path was possible for Sri Lanka: going to the IMF. Created in 1944, this international organization is a lender of last resort for countries whose economy is adrift. But seeking the help of the IMF implies accepting austerity policies by cutting social benefits and public services. Rajapaksa was not willing to suffer the political costs of such unpopular reforms.

Moreover, Sri Lanka has a troubled history with the IMF. Between 1965 and 2000, the country entered into 16 economic stabilization programs. The macroeconomic management of the country has been under IMF programs for most of its recent history, but only 9 of those 16 programs were completed. Like many other developing countries, Sri Lanka has thus a negative view of the IMF whose name is associated with Western imperialism. That is why, to break with this tumultuous past, President Rajapaksa preferred to seek financial support from neighboring China and India.

Given his country’s strategic location, the fear that one will take advantage of the other was enough to prompt the two behemoths of the region to provide financial support. However, the government was playing a dangerous game. By signing strategic deals with both countries, Sri Lanka managed to obtain short-term financial assistance, but they were insufficient to recover the $51 billion national debt, and Rajapsaka put the island at risk of finding itself at the epicenter of a direct confrontation between the two powers in the Indian Ocean.

To date, Rajapsaka has been driven out of the country and former prime minister Ranil Wickremesinghe has been elected president by the Parliament. One of the first things he did was to declare a state of emergency and initiate talks with the IMF to release emergency aid. While the country is still in the grip of important social unrest, the new political class will have to do much better than the previous one to avoid a total breakdown.

Featured image by Nazly Ahmed, obtained via Flickr under an Attribution-NonCommercial-ShareAlike 2.0 Generic License.