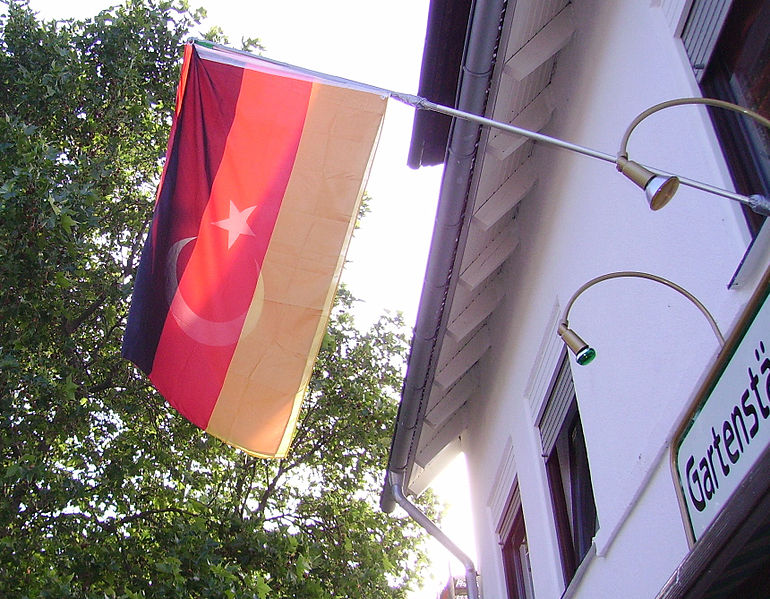 Turkish President Recep Erdoğan landed in Berlin on last Thursday to kick off a 3 day state visit to Germany. This is the first of its kind since Erdoğan became president in 2014. Before Erdoğan’s plane even landed, the German capital had begun protesting against the Turkish president’s presence.

In recent years Erdoğan has strengthened his grip over Turkish government leaning more and more towards authoritarian control since the attempted coup d’état in 2016. In particular, German Die Welt reporter, Deniz Yücel was jailed for a year without trial for his criticism of Erdoğan’s regime.

While dissent against the Turkish President’s visit was wide-spread through the streets, the German state has taken a more moderate approach to welcoming their military ally. Erdoğan was greeted with a red carpet and full military honours by German President Frank-Walter Steinmeier as he disembarked his plane. An official dinner was held between the two heads of states, though Merkel was not in attendance; an apparent show of tepidness from the chancellor. Despite this, Merkel was scheduled to meet with Erdoğan on three occasions over the span of the visit. The expected reaction to Merkel’s willingness to engage with the increasingly authoritarian leader will likely amplify her government’s growing unpopularity, since its formation last March.

According to Deutsche Welle, last Saturday morning Merkel and Erdoğan met over breakfast. Their discussions included enhancing inter-state “economic cooperation”, the EU-Turkey migration pact, and the conflict in Syria.

Over the past 2 years, ties between the two countries have been riddled with disagreement and denunciation. Their relationship continues to grow contentious – owing to Turkey’s almost failed bid to join the EU, recognition of the Armenian genocide, and diametrically opposite foreign policy goals. Most recently, Erdoğan accused Germany of harboring terrorists, making reference to the supporters of the ‘Fethullah Gülen movement’-  who fled to Germany following their failed attempt at a coup.

While Turkey and Germany have shared their differences in recent history, Erdoğan is likely to have shifted lenses on his ally to the west. Turkey now finds itself in a precarious economic situation, with a struggling private sector, a free falling currency and dwindling confidence from international investors. The economic situation leaves Turkey in need of financial supporters – regardless of where they come from, even if that means reneging on claims made in the past. Turkey is in dire of need of economic allies to secure the provision of important financial capital and to ensure the economic prosperity of the Turkish people. The present economic context has certainly led led to an asymmetry in how Turkey approaches their allies to the west.

Recently, Turkey also achieved the seemingly unachievable in the U.S. legislature. Now, in times of severe political polarization, a rare moment of bipartisanship led US Congress to impose sanctions on certain Turkish ministers for their refusal to release the jailed American pastor Andrew Brunson. Brunson was jailed by Turkish authorities on the basis of his affiliation with organizers of the attempted coup.

Erdoğan has exacted a particularly strong grip over political criticism since the attempted coup in 2016, imprisoning journalists and limiting the power of opposition political parties. The brazenly illiberal trend of policies adopted by Turkey have led their fellow NATO allies in the west to cast a wary eye over the integrity of their governance.

So what did Erdoğan expect out of his time spent in Germany? The most likely answer is that he is testing the waters to see whether he can find a more potent economic ally in Germany to aid in Turkey’s economic recovery. Turkey is one of Germany’s most prominent non-EU trading partners and it holds a key geopolitical position in managing conflict and migration in the middle east. The EU-Turkey Migration Pact leads to billions of Euros in payments to Turkey for their cooperation in providing asylum to refugees from Syria. While Turkey sees a key economic ally in the EU, the political will of key decision-makers to assist Turkey, is not as salient as Erdoğan might hope.

As aforementioned, Merkel has taken a characteristically skeptical approach to relations with Turkey thus far. In other German political circles, appetite for supporting Turkey is even lower. The SPD, the social democratic party in Merkel’s ‘Groko’ has expressed its wariness over further financial support of Turkey. Until the SPD is also won-over by Erdoğan’s messages, new legislation supporting Turkey will not pass through the Bundestag.

One item Merkel and Erdoğan may find common ground on is the upcoming intensification of US sanctions on Iranian oil exports. On November 4th, the US is set to unilaterally impose an embargo on all Iranian oil. Moreover, President Trump has promised to create new trade barriers for countries and blocs that continue to trade with Iran.

Meanwhile, the EU has made themselves a conspicuous candidate for Trump’s threats by recently announcing that it intends to build an international payments system independent of the ‘SWIFT’ system controlled by the US treasury.

This will facilitate purchase of Iranian products for European firms, without facing the financial pressure of US banks. Turkey has also declared it will continue to allow imports of Iranian oil after the embargo is imposed. In this sense, each party shares a mutual interest to avoid strong-arming by the US. It is possible that this common trade woes may become the basis for future economic cooperation between the EU and Turkey.

If Erdoğan wishes to pull Turkey out of the economic mess it’s ended up in, he must win the favour of Western political forces. In recent years, the Turkish president has made a bad case to Europe, unable to convince the European powers to cuddle up to their eastern neighbour. Jailing foreign civilians without trial, flirting with authoritarianism, and accusing Europe’s largest economy of “nazi practices” are are unlikely candidates for  winning over the hearts of European leaders. At the same time, given the US’ retreat from multilateral engagement and Turkey’s key geopolitical position for Europe, Erdoğan’s latest trip may be the beginning of a renewed relationship between Turkey and the EU.