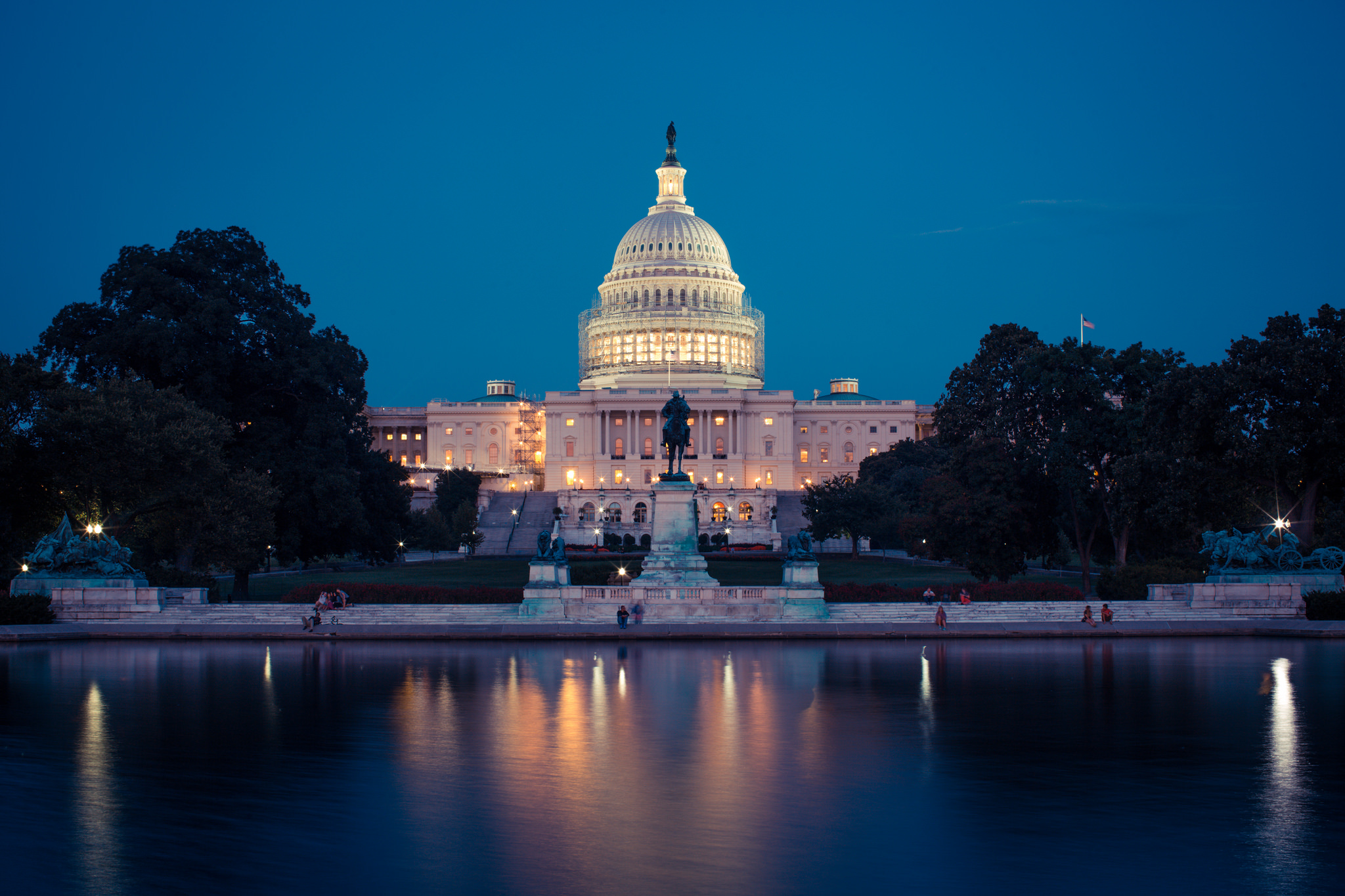 Yesterday, Americans went to the polls to elect a new Congress. All 435 seats of the House of Representatives and 35 Senate seats were up. Since Donald Trump’s election two years ago, pundits predicted a  “blue wave,” a scenario in which Democrats win the majority in the House and the Senate. How did this pan out yesterday? And what impact will the makeup of the new Congress have on Donald Trump’s presidency?

Before the election, the GOP held majorities in both houses. As of this morning, they have kept the majority in the Senate. The Republicans now hold 51 seats and the Democrats 45 (including two Independents who caucus with them). As of this morning, four races remain  too close to call: Arizona, Montana, Florida, and Mississippi. Given the rules in Mississippi, the two top candidates will head to a run off later this year, which means that the full make-up of the Senate won’t be known for a few weeks. Four incumbents lost their seats: Heidi Heitkamp (D-ND), Claire McCaskill (D-MO), Joe Donnelly (D-IN), and Dean Heller (R-NV). These losses were expected, since Donald Trump won North Dakota, Missouri, and Indiana in 2016, while Hillary Clinton won Nevada.

For the first time since 2010, the Democrats will have the House majority, and Nancy Pelosi is likely to regain her role of Speaker of the House. For the Democrats, the magic number last night was 23: they needed to flip 23 GOP-held seats to take back the House, which they did. As of this morning, the Democrats hold 219 seats, and the Republicans hold 193. A few races have not been called yet.

For the first time in his presidency, Donald Trump will face a divided government. He does not seem to worried for now, as he tweeted last night: “Tremendous success tonight. Thank you to all!” However, he might not feel this way when he will have to negotiate with Democrats over issues like immigration and tax cuts.

Here are some takeaways on the midterms, and what to expect next from a Blue House, Red Senate.

The Blue Wave Is Real

Yes, the Democrats lost a few seats in the Senate, and will not have an overwhelming majority in the House. But this does not mean that the so-called blue wave was overhyped. Democrats made substantial gains everywhere in the country.

There are many factors that could explain this difference, but many have pointed to gerrymandering. Gerrymandering has been used by Republican state legislatures to draw electoral maps that favor the GOP. Pennsylvania was one of the states where the map heavily favored the Republicans, to the point that the state Supreme Court ordered the map to be tossed out. Before the election, 13 of the state’s 18 seats in the House were held by the GOP.

As of this morning, only 9 are held by Republicans. In North Carolina, where a heavily gerrymandered map is used, the Democrats won 51% and the Republicans 48% of the popular vote for House races. However, the Democrats only won 3 out of 13 seats. A gerrymandered map prevented the blue wave from translating into a large number of seats, slowing it to a seeming trickle.

Despite the results, Democrats also won the popular vote in the Senate. Estimates show that 44 million Americans voted for a Democratic Senate candidate, while 33 million voted for a GOP candidate. As stated above, the Senate will remain controlled by the Republicans. This is not due to a “red wall” stopping the blue wave, but rather the Senate’s overrepresentation of smaller, redder states. Therefore, it isn’t fair to claim the blue wave did not happen. The popular vote last night was heavily in favor of Democrats; it was  the institutional nature of the Senate that prevented these votes from converting to seats.

Women Belong in the House (of Representatives)

For the first time, 100 women were elected to the House of Representatives. 65 female incumbents were reelected, 33 were elected for the first time, and two races that have not been called yet have two women competing against the other. This beats the previous record, which was 85. While the House has obviously not reached gender parity (this would call for more than 200 female representatives), last night’s results are encouraging for women around the country.

There were many other historic firsts last night. Democrats Sharice Davids and Deb Haaland became the first two Native American women to be elected to the House. Davids is also the first LGBTQ representative elected from Kansas. Democrats Rashida Tlaib and Ilhan Omar will become the first two Muslim women in the House. At 29, Alexandria Ocasio-Cortez will become the youngest female Congresswoman ever. Texas sent its first two Hispanic women to the House, Veronica Escobar (who won Beto O’Rourke’s seat) and Sylvia Garcia. Marsha Blackburn, a Republican, will become the first female Senator from Tennessee. Arizona will also send a woman to the Senate for the first time, but it is not yet clear if it will be Martha McSally or Kyrsten Sinema.

It is also important to note another historic first, this time for a male. Jared Polis, a Democrat elected Governor of Colorado, will become the first openly gay governor elected in the history of the United States. This is a major achievement for the LGBTQ community, and in his acceptance speech, Polis highlighted this historic achievement when he thanked his long time partner: “I want to thank … my personal support network — first and foremost, of course, my amazing partner, and the first ‘first man’ in the history of Colorado, Marlon Reis.”

This historic night of firsts is promising towards achieving a more representative Congress, where straight white males continue to be vastly overrepresented.

Democrats knew that if they wanted to take back the House of Representatives, they had to win over suburban districts filled with moderate independents and Republicans tired of Trump’s rhetoric. That is exactly what happened.

In order to flip seats won by Republicans when Trump was elected in 2016, Democratic candidates followed a script. They emphasized the GOP’s tax cuts and their attempts at repealing Obamacare, and the importance of a Democratic House to check and balance in the government. Trump’s last message before the midterms was that a caravan full of immigrants would invade the United States through Mexico. This seemed to have sealed the deal in some suburban districts, filled with moderates looking for civility. Former Rep. Tom Davis describes the shift away from suburbia: “The GOP base ‘has migrated from the country club to the country’.”

The GOP had hoped it could keep many suburban seats because most of the Republican representatives were moderates, and hoped  voters would distinguish the local candidate from national politics. However, this was not the case last night. Districts lost by the GOP include some in suburbian Virginia, Florida, Illinois, and Colorado. Even New York’s 11th district, which is seen as the GOP’s last stronghold in New York City, elected Democrat Max Rose over incumbent Dan Donovan. Donovan had voted against the GOP tax cuts and repeal of Obamacare, but still lost his seat. Suburban voters were ready to rebuke Trump, and it led to many moderate Republicans losing last night.

What Comes Next: Subpoenas in the House, Conservative Judges in the Senate

While the Democrats have not formally voted on the next Speaker of the House, it is likely to be Nancy Pelosi. She served as Speaker the last time Democrats held the House, and even if some members of the party have said they will not vote for her, no credible alternative has emerged. Pelosi and the Democrats will have their work cut out for them in the House.

The Democrats will now be able to investigate Cabinet members and the White House. Rep. Elijah Cummings, who is poised to be the chairman of the House Oversight and Government Reform Committee, has stated that the House will now serve as a check on the executive. The Democrats already have a list of 64 subpoenas to vote on.

President Trump is expecting Democrats to launch investigations, and promised to strike back in a tweet this morning: “If the Democrats think they are going to waste Taxpayer Money investigating us at the House level, then we will likewise be forced to consider investigating them for all of the leaks of Classified Information, and much else, at the Senate level. Two can play that game!”

The Senate, still held by the GOP, will be to continue to confirm conservative judges. Before the midterms, Senate Majority Leader Mitch McConnell said that confirming judges is his top priority. With his majority intact, he will be able to keep pursuing this path. he Senate has already confirmed 29 Trump appointees to federal benches since 2017, and this is likely to continue.

Furthermore, many liberal justices are aging: Ruth Bader Ginsburg is 85 years old, and Stephen Breyer is 80. If one of them were to retire or die in the next two years, the Senate would likely confirm a conservative Supreme Court judge, which could impact years of judicial decisions. Yesterday’s results might have an impact on the Supreme Court and federal courts for decades to come.

Divided government usually leads to gridlock, which results in little to no policy changes. However, yesterday’s results provide something that has been missing in the past two years: checks and balances. President Trump, in a press conference earlier today, stated that he would collaborate with Nancy Pelosi. Mitch McConnell expressed similar sentiments. Whether Republicans and Democrats can find common ground in polarized Washington remains to be seen.