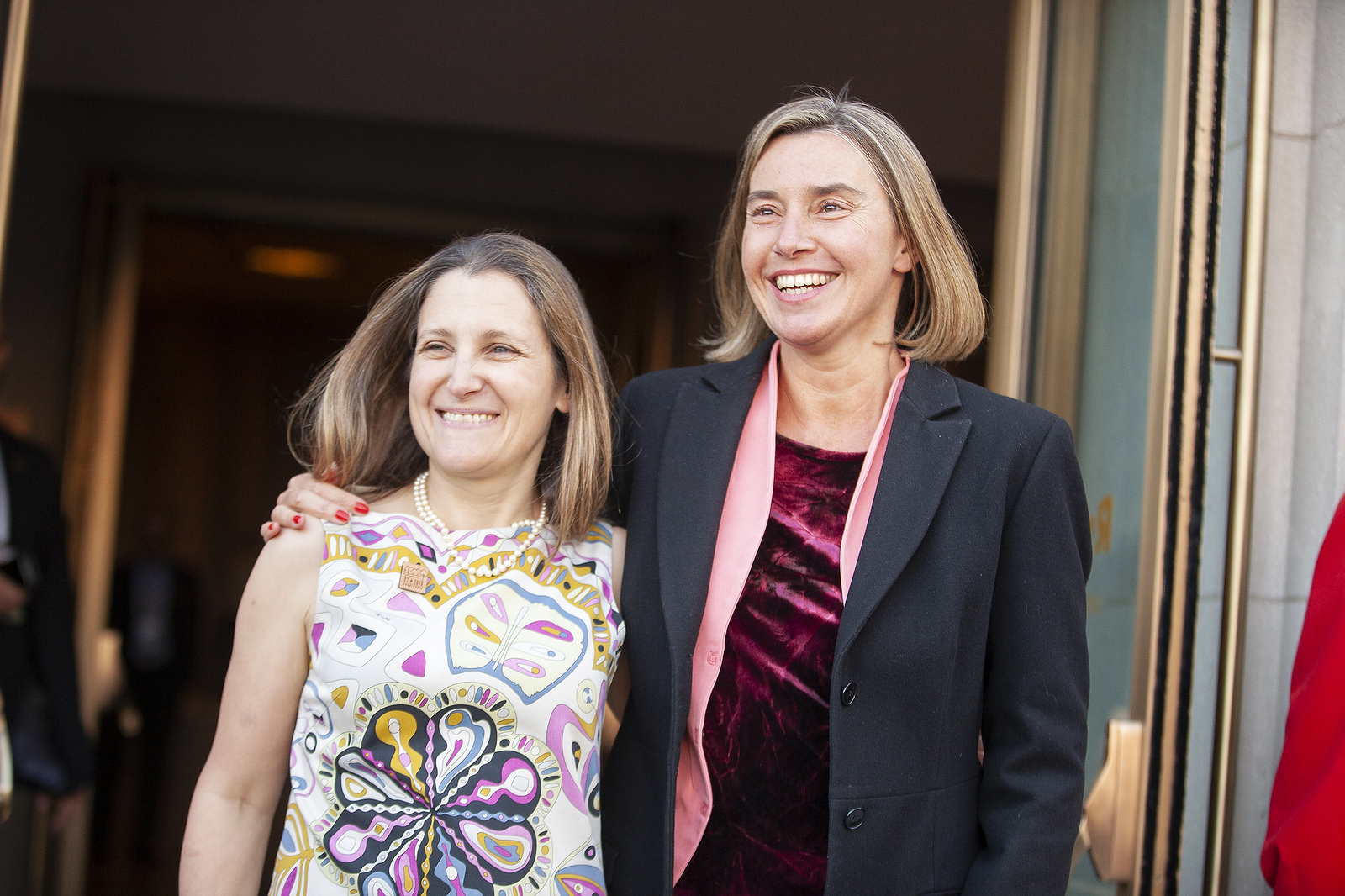 Yesterday, a public event at McGill University featured Canadian Foreign Minister Chrystia Freeland and the High Representative of the European Union, Frederica Mogherini. The event was titled “Navigating Uncharted Waters: the EU and Canada Closer Than Ever.”

In her opening speech, Mogherini objected mildly to the title, and said, she would rather just go with “the EU and Canada closer than ever.” Public speeches by such foreign dignitaries are often as much about the things left unsaid or the phrasing of answers, as much as they are about the actual substantive comments.

Anybody listening to Freeland and Mogherini’s rhetoric, would agree that “navigating uncharted waters” is as appropriate a title as one could have asked for. With increased focus on the EU-Canadian bilateral relationship, the “uncharted waters” not only represent a new chapter for this bilateral relationship, but also the state of the very global order that is compelling these two entities to forge closer ties.

Mogherini and Freeland put up a united front, and stressed their joint commitment towards liberal democracy, free trade, value of diversity, a rules-based world order, and most importantly, multilateralism.

The Canadian-EU relationship has recently undergone a massive shift with the Canada-European Union: Comprehensive Economic and Trade Agreement (CETA). Stressing the importance of free trade, Mogherini remarked how CETA is  a “one of a kind” trade deal. She argued that, while the deal liberalized trade between Canada and the EU, it also harmonized the standards between the two entities.

Freeland was asked how the EU’s producers have benefited more from CETA than the Canadian manufacturers thus far. Fascinatingly, her answer was music to any free-marketer. She said if that were the case, then Canadian producers “just need to hustle more … and ensure their products find their way to European markets.” As the global economy wrestles with rising protectionism, such rhetoric is a pleasant welcome.

When asked about Russian and Chinese relations with the EU, Mogherini’s answers were somewhat similar. She stated that the EU has some fundamental disagreements with Russia and China. With respect to Russia, there is a clear divergence in how Brussels and Moscow assess Ukraine and Syria. In terms of China, Beijing and Brussels’ views don’t exactly converge on the idea of liberal democracy and human rights. But that said, Mogherini remarked that the  EU continues to work with both China and Russia on several other issues.

Discussing the increasing salience of the nuclear question and non-proliferation in global politics, Freeland provided a refreshingly honest insight. Regarding the present state of Ukraine, she reminded the audience about the “Budapest Memorandum” of 1994, and how Ukraine undertook  the unprecedented task of giving up its nuclear weapons. She argued that the West had not kept up with its side of the deal of security guarantees given to Ukraine back then.

For a public event, the two leaders were more informal than one would expect, but the simmering underlying realities were hard to miss. Three instances help highlight that.

First, the term ‘liberal democracy’ was mentioned a staggering 10 times in a span of less than 60 minutes. This would have been highly unusual five years ago. Second, Freeland remarked that the core foreign policy goal of Canada is to diversify its trading relationship. Again, five years ago, no one would have anticipated that statement from the foreign minister of US’ Northern neighbour.

Third, for an event featuring two foreign ministers, nearly the entire discussion passed without either of them mentioning the United States. And when it finally came up during the question-answer session, the way both Freeland and Mogherini chose to address it was deeply insightful. They both separately remarked that Ottawa and Brussels agree with Washington on several issues but there are clear areas of disagreements. Interestingly, that is exactly how Mogherini chose to categorize EU’s relationship with Russia and China.

Who would have thought five years ago that the EU’s High Representative would categorize the EU-US relationship as similar to the EU-Russia relationship?

Towards the end of the event, without mentioning the US, both leaders emphatically said that it was time for the EU and Canada to step up and provide global leadership. They emphasized that liberal democracy is at the heart of the Western order and agreed that they need to work towards saving it.

We live in a crumbling world order with new, patchy relationships and agreements. Multilateral regimes such as the WTO and NPT, which ensure the rules-based order, are losing resilience. And global powers are willing to work with each other only on an issue-by-issue basis.

Going ahead, we will see more and more of the non-US transatlantic states come together in an effort to anchor the rules-based order. It is only over the due course we will learn whether these patchy, regional arrangements can help carry the world order through this turbulent phase.