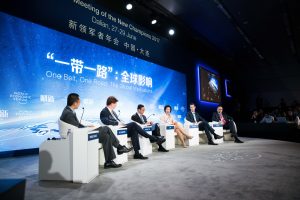 Not far from Colombo, a docked ship sways in the warm waters of the Indian Ocean. Further west, a passenger train departs Mombasa to cut across rough Kenyan terrain towards Nairobi. To the north, a freight train passes through large expanses of Kazakh steppe on its way to Finland. These are among dozens of other projects throughout Africa, Eurasia, and Oceania, that fall under China’s President Xi Jinping’s main foreign policy doctrine, the “Belt and Road Initiative” (BRI) – a modernized revival of the ancient Silk Road.

First pursued by the Han Dynasty, the ancient Silk Road was a vast network of trade routes interlocking China’s economy with cities across Eurasia. Today, President Xi is reviving the ethos of the ancient Silk Road and its culture of trade and commerce. The modernized Silk Road has been dubbed the Belt and Road Initiative and it vastly eclipses its predecessor in both scale and ambition. President Xi first announced the BRI in 2013 in Astana, Kazakhstan and spoke of closer economic cooperation between China and Central Asia.

However, the BRI is a much more ambitious project than Sino-Central Asian cooperation. President Xi announced the Belt and Road Initiative within the context of economic destitution in rural China, a search for an alternative import route to the vulnerable Malacca Strait, and the desire to export Chinese economic and political influence. The ultimate goal behind the BRI is to secure China’s economic interests and to challenge US economic and political influence over Africa and Eurasia.

What is the BRI?

The Belt and Road Initiative is the Chinese government’s development strategy that invests in infrastructure in Asian, African and European countries to strengthen infrastructure, trade ties and investment links between China and recipient countries. The BRI network consists of 70 countries. China has already spent approximately $300bn on infrastructure, transport, and energy projects. Within the next decade, China plans to spend another $1 trillion dollars. The extent of the initiative is staggering.

The “Belt” aspect of the initiative refers to several weaving inland routes that flow from the urban centers of Beijing and Shanghai, traversing Eurasia and Africa to the edge of Western Europe. The “Road” refers to a maritime route that begins in the South China Sea and crosses through ports in Oceania and the Indian Ocean, continuing onwards through the Suez Canal and arriving on the shores of Europe via the Mediterranean.

China’s ambition in investment projects has garnered a more positive response from developing rather than developed countries due to the fact that investment from Western Institutions is often restricted and regulated. Conditional investment pushes developing countries, especially those with authoritarian governments, to favour Chinese over Western investment. This is because the BRI emphasizes a no-strings attached, mutually beneficial, non-interference system of funding – or so it seems. Two caveats of the investment are that the loans are so large that the receiving nations are at serious risk of not being able to pay back it back and most of the construction contractors are Chinese companies.

The BRI in Action

As a result of the sizeable loans issued by the Chinese government, several BRI projects in recipient countries have lost their autonomy to China. The cases vary, but ultimately it entails Chinese control over the BRI projects using debt-trap diplomacy – a strategy to seize foreign assets. To begin the process of debt trap diplomacy, a generous loan from a creditor country (China) is issued to a recipient country with the intent that it will never be paid back financially. Instead, the debt will be paid by leasing the very investment the loan was used for, giving China leverage over the recipient countries.

In 2017, the Sri Lankan government leased the strategic port of Hambantota for 99 years to China after having trouble paying its debts. Construction of the port was mostly financed by a Chinese loan and the China Harbor Engineering Company. Pakistan has leased its Gwadar port to China Overseas Port Holding Company for 40 years due to debt troubles.

These land-leasing agreements have drawn regional attention and a more suspicious outlook on Chinese investments. Such is the atmosphere in Myanmar, which has scaled back the extent of the planned development of its south-eastern Kyaukpyu port over fears of being too heavily indebted to China. The aura of debt-trap diplomacy is encompassing several planned BRI projects, which threaten Chinese geopolitical goals in the region.

Economic Incentives Behind the BRI

The incentive for China to control the port of Gwadar in Pakistan or Kyaukpyu in Myanmar is that these ports, among other projects, offer an alternative passage of trade to China. Most foreign trade and resources to the Chinese mainland flow through the Strait of Malacca, a maritime choke point between Indonesian Sumatra and Malaysia.

This critical passageway, along with several other passageways stretching from Indonesia to the Philippines and Japan, are controlled by US allies. The archipelago geographically surrounds and encloses the Chinese mainland from outer waters, meaning that in the event of a war, the US would have the ability to effectively enforce a maritime embargo on China.

To mitigate the threat, China is forging economic and infrastructure agreements with countries that can offer strategic ports outside the Malacca strait. Both Pakistan and Myanmar offer direct passages from their shores to China, able to deliver crucial oil and natural gas imports. They also serve as exit points alternatives for China’s export-dependent economy.

Supplementing China’s maritime alternatives are overland routes weaving West across Central Asia towards Europe. One such project is the railway linking the Chinese city of Xi’an to the Finnish city of Kouvola, completed in 2017. The railway carries cargo to and from China with exports arriving in Finland within 10 to 12 days, much quicker than the eight weeks it would require shipping cargo by sea.

Finland plans to extend the railway to Norway and Sweden. Other railways linking China to Europe include the “New Eurasia Land Bridge Economic Corridor” extending from Lianyungang in Eastern China to Rotterdam in Holland. It also links to cities in Croatia, Poland, Belarus, and Germany. In total there are six overland economic corridors linking Eurasia to China.

These corridors pass through the interior areas of China, much of which suffers from economic destitution. The BRI has domestically targeted 15 provinces within China to stimulate their economic growth by establishing economic zones and finance centers, as well as rail lines to facilitate trade and investment. China’s success at cementing overland trade links both domestically and internationally proves a strategically valuable alternative to vulnerable maritime routes.

Military Incentives Behind the BRI

These developments have produced a geopolitical theory known as the “String of Pearls,” which speculates that there is a potential Chinese intention to dominate the waters of the Indian Ocean via a web of strategic naval bases and commercial ports. These “pearls” include naval facilities in Thailand, Myanmar, Bangladesh, Sri Lanka, the Maldives, Pakistan, Kenya, and Sudan. The presence of naval facilities at these locations warrants a substantial Chinese naval presence both at the locations themselves and between them.

This is demonstrated by the opening of a Chinese military naval facility in Djibouti in 2017, rendering Chinese military presence between the South China Sea and East Africa a plausible reality. Such circumstances legitimize the Chinese navy in navigating these waters and protecting critical trade routes, setting in place the opportunity to dominate the South China Sea. Most importantly, it gives China the strategic military capability to defend the Strait of Malacca – its current oil-import lifeline.

On top of military strategy, several of these “pearls” are commercial ports which China can expropriate using debt trap diplomacy. Following the logic of the String of Pearls Theory, it is possible for China to militarize these ports to further consolidate its control across the Indian Ocean and the South China Sea, its trade routes, and influence throughout the area.

Taking a step back, concluding whether or not the BRI will be successful in tying the economy of China to its recipient countries remains unclear. The BRI is a long-term project, as are its goals. However, despite the risks, Chinese loans remain seductive to many developing countries.

Increasing Chinese presence along the coasts of Southern Asia and East Africa makes control over its export and import maritime routes more of a reality. It has a significant presence within the economies of Eurasia and Africa, and in the process poses a challenge to US economic and political influence in these regions.