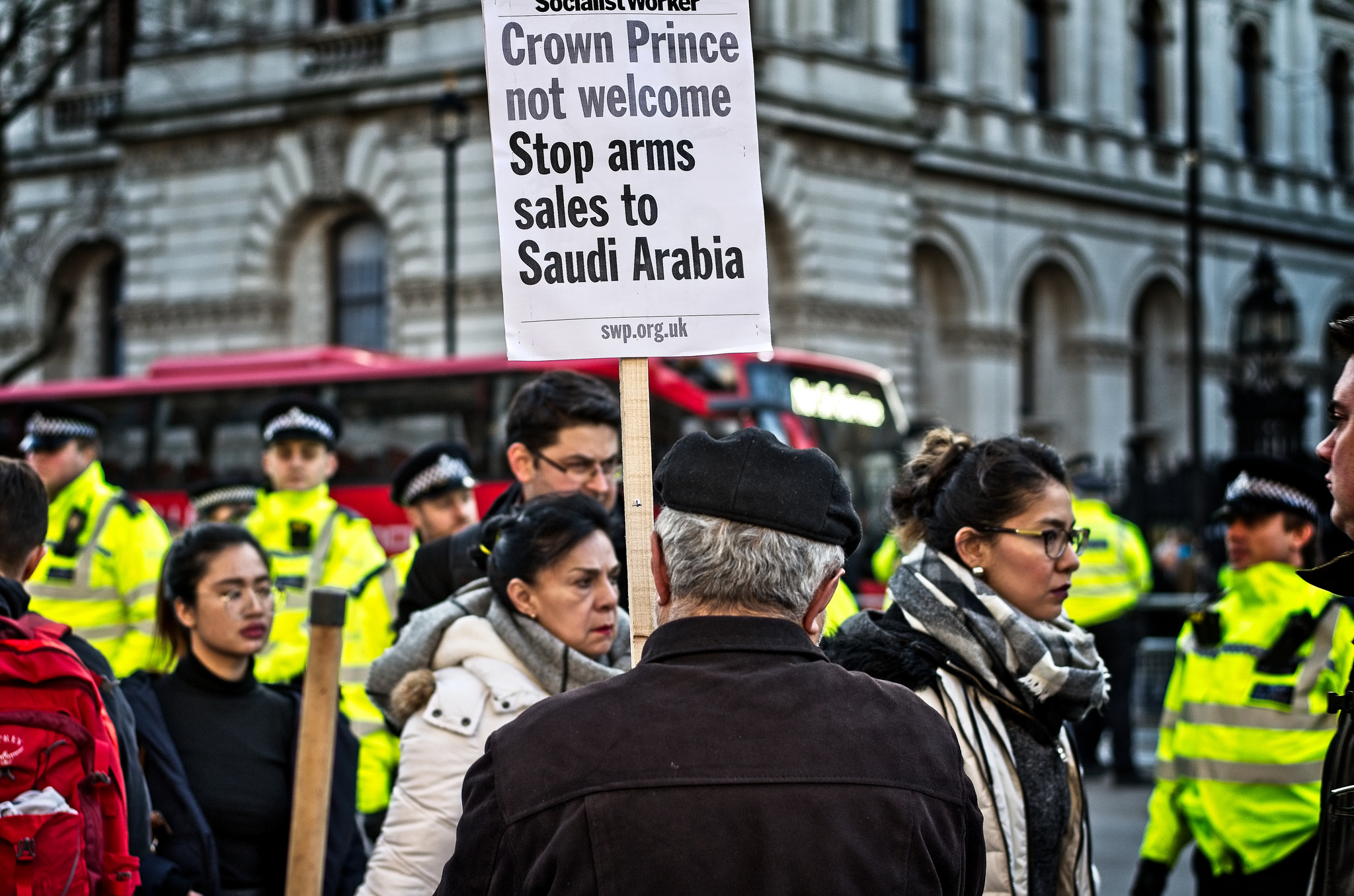 The recent killing of the Saudi Arabian dissident journalist Jamal Khashoggi inside the Saudi Consulate in Istanbul has attracted international coverage and fierce condemnation. The assassination of one man has caused greater outrage concerning the Kingdom’s violations of human rights than the war in Yemen and corresponding humanitarian crisis ever have. This is in part due to the many circumstances around Khashoggi’s murder, such as the location and the journalist’s relationships with many Saudi political elites.

Whether or not the story of one man deserved more attention than the 10 000 lives lost since the start of the Saudi-led coalition in Yemen, the reaction to the Khashoggi Affair has provided the international community a pivotal moment to scrutinize the Kingdom and hold it accountable for human rights violations. However, given  the interests at stake for countries allied to the Kingdom, and the set precedents of gained momentums by particular events concerning Saudi’s human rights abuses which have caused few subsequent international initiatives, even such a possibility remains slim.

In March 2015, Arab countries united to launch a Saudi-led coalition in Yemen, in which Riyadh’s goal has been to restore President Abd Rabbuh Mansour Hadi to power and defeat the Iran-allied Houthi uprising. Due to the Kingdom’s perceived threat of Iranian influence in Yemen through the Houthi movement, it is unlikely that the Saudis will relinquish their quest to shape Yemen’s future until they are guaranteed a future in which Houthis play a lesser role.

Nonetheless, hopes of stability were expressed by the international community after President Ali Abdullah Saleh’s stepped down in the Arab Spring, and the subsequent coming of power of the then-Vice President Hadi – the only candidate in the elections. But Hadi’s inheritance of a deeply fractured society and general instability has given way for many aggrieved parties to follow their goals.

The civil war, although rooted in a local conflict between the Hadi regime and its opponents, is fueled by international interventions, creating a never-ending stalemate that keeps worsening. Civil wars normally end when one side loses or surrenders having exhausted its military capacities.  However, the involvement of foreign powers alters this reality. Both the military and opposition groups are supplied by foreign powers, thus creating a scenario in which arms never fall short and run out.

For its part, the UK has licensed over £4.6 billion worth of arms to Saudi Arabia since the start of the campaign. Such weapons include warplanes and missiles, but also grenades, bombs and guns which are ideal for insurgent groups. The British government has admitted to not tracking the use of these as they stated, “We do not have a full picture of which specific items have been used in Yemen.”

In March, the Trump administration celebrated as the Senate failed to pass a resolution to terminate logistical support by the U.S to the Arab coalition against the Houthi rebellion. During his speech in front of the United Nations General Assembly on September 25th, Trump deplored Yemen’s “horrible, horrific civil war”, arguing that Saudi Arabia and the UAE were promising millions of dollars to help Yemen civilians and working towards ending the conflict.

Furthermore, a recent investigation by the Associated Press established that militias in Yemen backed by the Saudi-led coalition, supported in arm trades by the US and UK, have recruited hundreds of al-Qaeda fighters to combat Houthi forces. So while the US, under Trump, claims to be fighting terrorism in Yemen and has increased drones strikes against AQAP targets, its siding against the Houthis has positioned it on the same side as al-Qaeda fighters.

France is no different with its arms sales to Saudi Arabia and the UAE, violating systematically the Arms Trade Treaty (ATT) and the EU Common Position. In 2017, the majority of arms deals in France were with the Middle East, in particular Saudi Arabia, which has been the beneficiary of guns, armoured vehicles, missiles, ships, and more sophisticated weaponry produced in French factories for a number of years. The French arms industry creates 160 000 jobs and depends on exports to make the equipment more affordable for French armies themselves.

The international response to the bus attack in Dahyan failed to generate more than condemnation and small gestures to silence global outrage. The attack was condemned by the UN Secretary General  António Guterres, who called for “an independent and prompt investigation.” The UK’s response to the bus attack was limited to a tweet posted by Alistair Burt, the Foreign Office minister for the Middle East, who stated being “deeply concerned” about the toll of children’s deaths while failing to mention the Saudi-led coalition’s responsibility in this tragedy.

A congressional bill signed by President Trump on August 13th requires from then-on the secretary of state, Mike Pompeo, to guarantee that the two leaders of the coalition, Saudi Arabia and the UAE, are making efforts at preventing civilian casualties, without which the US would cease to supply Saudi warplanes employed in the campaign. Beyond condemnations, however, the US and the UK remain the two greatest arms sellers to Saudi Arabia. One can infer from these small gestures that their primary concern, therefore, is not Yemeni lives, but rather, it is to dissociate their arms supplies to Riyadh from the Saudi-inflicted casualties on civilians – a rhetoric that isn’t convincing many.

On the other hand, the list of countries which have either paused or blocked arms sales to the coalition has been steadily increasing. Last June, while failing to establish a complete moratorium on arms sales, the Conseil d’État of Belgium suspended six arms licenses destined to Saudi Arabia. Norway suspended arms sales to the Kingdom in January after having carried out “comprehensive assessment of the situation in Yemen”, and the Netherlands and Sweden have also limited their weapon sales.

However, a drop in these countries’ arms exports will by no means make a difference for the lives of Yemeni people, so long as the largest arms suppliers stop reinforcing and fueling the cycle of violence. In terms of worth of sales since 2014, the largest arms suppliers to Riyadh are the U.S, the U.K and France. These countries’ governments have shown little to no interest in forfeiting or backtracking on their lucrative deals with oil-rich Saudi Arabia, despite activism and fierce opposition by civil society groups and NGOs.

If neither the international uproar caused by the Khashoggi affair and the bombing of a school bus in August were sufficient to make these countries flinch and rescind their deal with the Saudis, then it suffices to say that, most likely, nothing will. Under these circumstances, the only hope for a change of status quo is a change of government less in favor of arms trade with the Saudis.

The previous Obama administration did react to international pressure following an aerial raid that cost the lives of 140 people in October 2016, during a funeral ceremony in Sanaa, through partially halting the sale of laser bombs to Saudi Arabia in December 2016. But Donald Trump’s new administration reversed this decision following his election and has overall strengthened US ties with the Kingdom. In the UK, Labour Party leader Jeremy Corbyn has pledged that if he gets into government, he will terminate weapons sales to Saudi Arabia.

So long as such foreign powers do not rescind their role in the war, the fate of Yemenis will continue to be shaped by actors other than themselves. While continuously being left out at the negotiation tables, Yemenis will continue to ultimately bear the brunt of the agreements foreign powers much benefit from. But it seems as though the international outrage caused by one man’s death will not be enough to turn the tide in Yemenis’ favour.

Not even the full-scale attack on the port of Hodeidah in Yemen this June was enough to do that. Neither was the death of 10 000 Yemenis, nor the naming of the conflict as the “worst humanitarian crisis” in the world by the UN, nor the displacement of 8 million people who now depend on international aid, were sufficient to do just that.  An independent monitoring group, the Yemen Data Project, suggested that the attack on the school bus inscribed itself among 55 other airstrikes against civilian vehicles and buses since the start of 2018.  Coalition air strikes have been the major cause of the 17 223 civilian casualties reported by the UN.

While it is true the international coverage surrounding this event was significant enough to potentially alter the status quo, it seems the benefits of maintaining the current state of affairs offset the harm that actions involving more than condemnations could induce on arm-supplying countries to Riyadh.