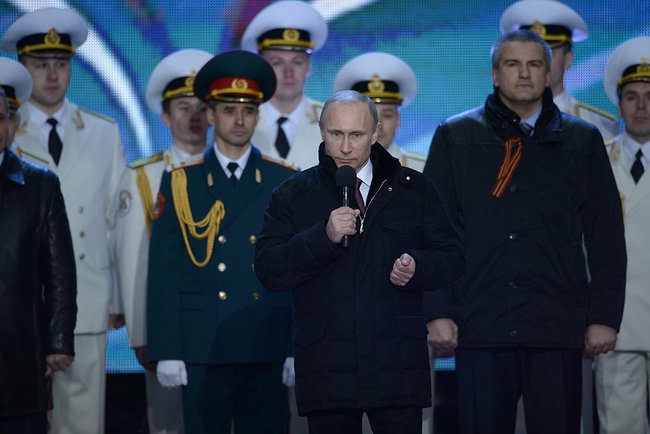 Five years ago, Russian forces annexed the Crimean peninsula after a controversial referendum. NATO and the EU strongly condemned Russia’s actions, and the move shook the post-cold war global order.

International law aside, the Crimean operation was successful for Putin domestically. Prior to the Crimean annexation, Russia’s regime had been rocked by widespread protests. Between 2011 and 2014, public demonstrations became common; many took to the streets in Moscow to protest Putin’s return to power in an apparently illegitimate Presidential election. On top of this, the Russian economy was stagnating. Putin’s public approval rating was at a record low of 66%.

This all changed with the Crimean takeover. Although the move resulted in the deterioration of Russia’s relationship with the West, the annexation was praised domestically. Many backed the re-assertion of Russia’s great-power status; Putin’s approval ratings soared to 86%.

Partaking in foreign campaigns to distract from domestic problems is a time-honoured move for state leaders. Argentina arguably launched The Falklands War to divert focus from a failing economy and establish national unity.  The US decision to invade Iraq can also be seen as a diversionary war; it was partly motivated by the desire to unify the country post 9/11 and increase support for the incumbent government.

At the outbreak of the Russo-Japanese war in 1904 a Russian Minister stated: “We need a little, victorious war to stem the tide of revolution.” Due to the short-sighted nature of diversionary warfare, this was ultimately unsuccessful.

Yet, the Crimean annexation is not an irregularity. Rather, it is consistent with a larger pattern in Russian foreign policy. The government’s response to domestic instability is to lash out internationally.

Leading up to Putin’s first term as President in 1999, Russia was experiencing political and economic turmoil. Five different prime ministers had been appointed over the course of 16 months, and the country had defaulted on its debt. During this time, Putin cultivated his public persona by advocating for a military crackdown in separatist Chechnya. The Second Chechen War established Putin as a strong leader in the public eye. Despite being relatively unknown prior to the conflict, his public approval rating was above 70%.

Putin’s dependency on public approval polls certainly makes military ventures that rally public patriotism appealing. The annexation of Crimea directly mirrored the strategic behaviour of 2008, when Putin successfully diverted focus from the financial crisis by going to war with Georgia. Even when Russia’s GDP dropped by 8%, his public favourability rating rose to 88%.

However, there is the issue of cause and effect. Although Russia’s foreign operations do result in increased patriotism and support for the government, it is difficult to ascertain that the “rally-around-the-flag” effect is the government’s primary reason for acting.

In the case of Crimea, multiple factors outside of the Kremlin’s control contributed to Russia’s decision to pursue military action. Yet, the pattern of behaviour is undeniable. As the culmination of one conflict leaves space for citizens to express their concerns, another foreign venture commences, and public approval returns to pre-conflict levels.

As the Crimean annexation reaches the five-year mark, Russia has come full circle. Valery Fadeev, a member of Russia’s public chamber stated: “The mood has changed, Crimea has become a part of everyday life and has stopped being political”. Although Russia’s dubious claims to the area arguably make the region political, it is true that the news cycle moves on as wars end, allowing citizens to set their focus elsewhere.

Diversionary wars are an unsustainable quick-fix to Russia’s deep-rooted problems. As soon as the dust settles, domestic issues are yet again brought to the public forefront. The country has seen an upsurge in protests in the past year, motivated by wide-ranging domestic concerns. Putin’s re-election in 2018 resulted in a public outcry, much like it did in 2012. Demonstrators have demanded free and fair elections with legitimate options, and an end to corruption.

Putin’s power vertical is reliant upon a direct line of contact between the government and its constituents. Focusing solely on a foreign-policy agenda and ignoring public demands for change creates a disconnect. As stated by analyst Tatyana Stanuvaya of The Moscow Times: “Crimea rallied Russians behind Putin — but Putin no longer listened to them.”

Military excursions are costly, and international sanctions are taking their toll on the Russian economy. With a population already unhappy with the status-quo, spending money on foreign adventures rather than investing it back into national projects is likely to trigger public resentment in the long term.