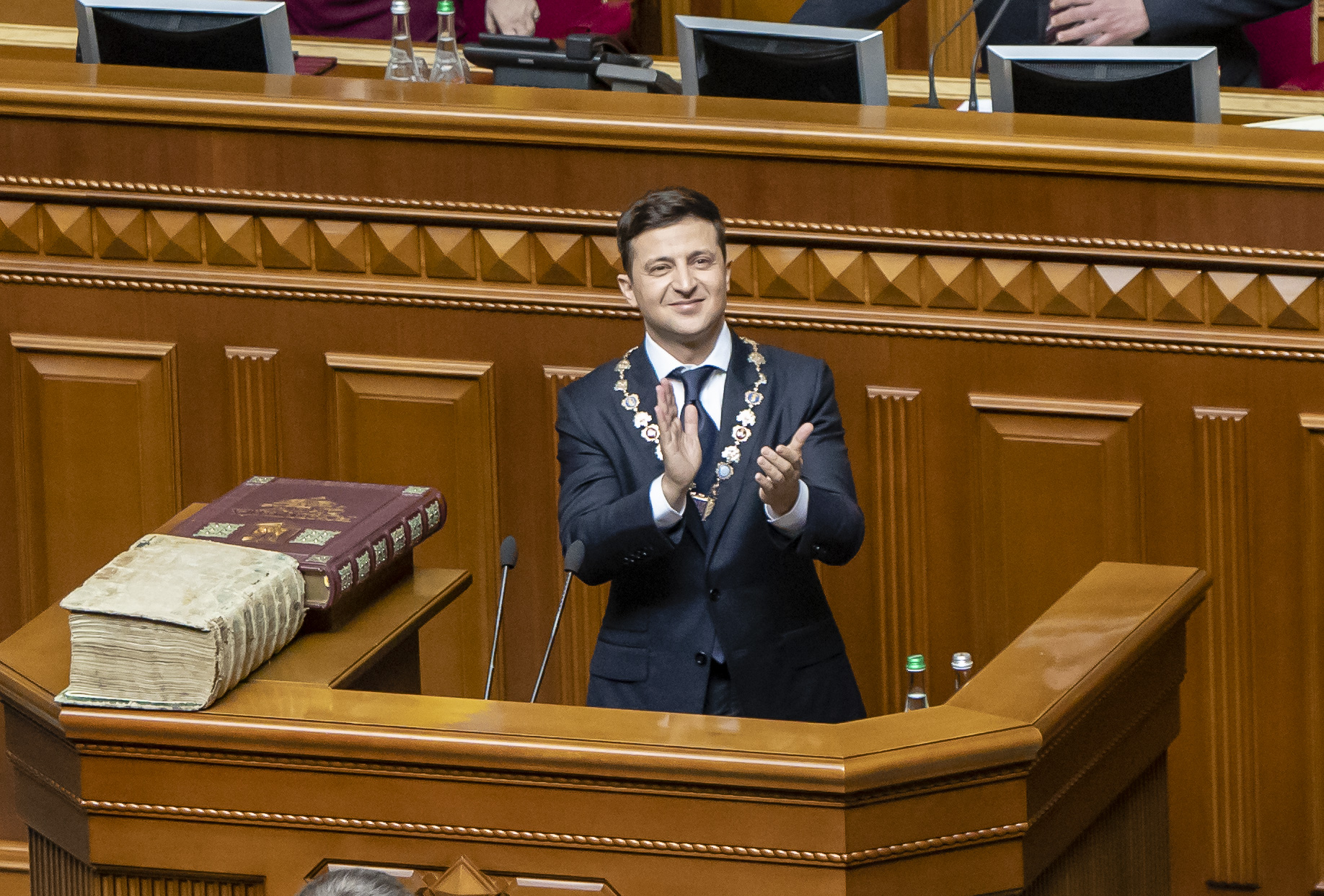 At the end of April 2019, Ukraine elected Volodymyr Zelensky as the country’s new president in a landslide victory against incumbent Petro Poroshenko. Zelensky’s election and the support for his populist rhetoric is largely perceived as a reaction against Poroshenko’s reluctance to implement reform in Ukraine. In the months leading to Zelensky’s victory, the newly-elected president ran on an anti-corruption platform with the goal of re-establishing faith in Ukraine’s formal institutions.

In his time as an actor in a popular Ukrainian comedy television series, Servant of the People, Zelensky played a high-school teacher who became president of Ukraine following a video being published regarding his dissatisfaction with the Ukrainian government. The former comedian and celebrity spent much of his career mocking politicians, leading many Ukrainians to distance Zelensky from his elite and upper-class status and put their trust into his outsider status instead. The parallels between Zelensky’s campaign and the plot of his television series have led many observers to point to a ‘life imitates art’ effect.

Zelensky’s electoral majority has been described by analysts as a product of his “informal style” and promise to “clean up” Ukraine. In winning approximately 73% of the vote in an election with an over 60% turnout rate, Zelensky’s presidential win is a true representation of a country whose populace is disillusioned and discouraged with the future of Ukraine.

April 2019 saw the five-year mark of Ukraine’s ongoing conflict with Russia, following Russia’s annexation of Crimea in eastern Ukraine. The conflict has claimed more than 13,000 lives, and there is no end in sight. The spirit of the Ukrainian people has been shattered following the start of the conflict. As the Donbas Desk of Radio Free Europe / Radio Liberty’s Ukrainian Service reports, feelings of “fading hope” have been expressed by those living under separatist rule in Eastern Ukraine, with the fear that “things are only getting darker.” Since the start of the conflict, more than three million Ukrainians have been living in self-declared (but unrecognized) states in Donetsk and Luhansk. As the United Nations Assistant Secretary-General for Humanitarian Affairs, Ursulla Mueller, has stated regarding the conflict: “They have lost their livelihoods and their limited resources have been exhausted by now. They rely on humanitarian assistance to meet their most basic needs.”

Zelensky’s campaign platform did not outright express his position on relations with Russia, leaving many to question if the newly-elected president would embrace Poroshenko’s policy as being a “party of war,” or reboot relations with Russia. Following the Kerch Strait incident in late 2018, Poroshenko reaffirmed his harsh stance on Russia, declaring that “[he doesn’t] want anyone to think this is fun and games’’ and that “Ukraine is under threat of full-scale war with Russia.” Zelensky’s actions since the election have pointed to his desire to end the conflict in the Donbas, where the oblasts of Donetsk and Luhansk are situated.

In the days following Zelensky’s presidential win, Russian President Vladimir Putin began to offer Russian passports specifically in the Luhansk People’s Republic of Eastern Ukraine. Such actions by the Russian Federation have been viewed by the Ukrainian government as legitimizing Russia’s territorial claims in Ukraine. In addition, Dmitry Peskov, spokesperson of the Kremlin, announced how it was far “too early to talk about any congratulatory wishes from President Putin” regarding Zelensky’s win. With this being said, Russian Prime Minister Dmitry Medvedev has stated that “there are chances to improve Ukraine’s interaction with [Russia],” but that this can only be “judge[d] … on the basis of actual deeds by Zelensky.” Poroshenko has expressed that the Kremlin’s openness to potentially work with Ukraine could allow for the inexperienced Ukrainian president to quickly return Ukraine “to Russia’s orbit of influence.”

With the future of a better Ukraine now lying in the hands of Zelensky, the President’s relations with Ukrainian oligarch Ihor Kolomoisky will be the true test of his campaign promises to fight corruption in Ukraine. Kolomoisky worked with Zelensky on Servant of the People, and later left Ukraine after former President Poroshenko accused Kolomoisky of involvement in a bank looting. With Kolomoisky’s return to Ukraine following the recent election, Zelensky’s claims could lose their credibility if he decides to give Kolomoisky a clean slate and appoint him in government.

Despite the multitude of risks and potential outcomes the newly-elected Zelensky government presents, Zelensky’s inaugural address in late-May affirmed to the Ukrainian people and the world that Zelensky’s government would not be on the side of Russia. He stated: “Our very first task is to make the fire stop in the Donbas,” adding how among Ukrainians, “each of us has died in the Donbas. Every day we lose one of us.”

On May 27, Zelensky himself made a visit to the war’s frontlines in eastern Ukraine, speaking to soldiers about their living conditions. Prior to Zelensky’s visit in Eastern Ukraine, Zelensky encouraged officials at Washington to increase sanctions against the Russian Federation, stating that Ukraine “will not be able to overcome Russian aggression in Donbass and Crimea alone.” Peskov spoke against Ukraine’s actions, saying that Zelensky’s rhetoric “is the rhetoric that will not help Ukraine to sort out the problem of the southeast.”

It appears that Zelensky’s government is ready to embrace a risky and challenging relationship with Russia. With the interests of the Ukrainian people at heart, Zelensky has stated his ultimate goal of achieving a ceasefire with Russia. As said during Zelensky’s inaugural address, the new president-elect “will be doing everything” for Ukrainians “not to cry.” With the recent five-year mark of the conflict of Crimea, Zelensky’s future actions will be crucial in determining if a dialogue and ceasefire with Russia can be achieved.

Feature image by the U.S. Embassy in Ukraine via Flickr Creative Commons