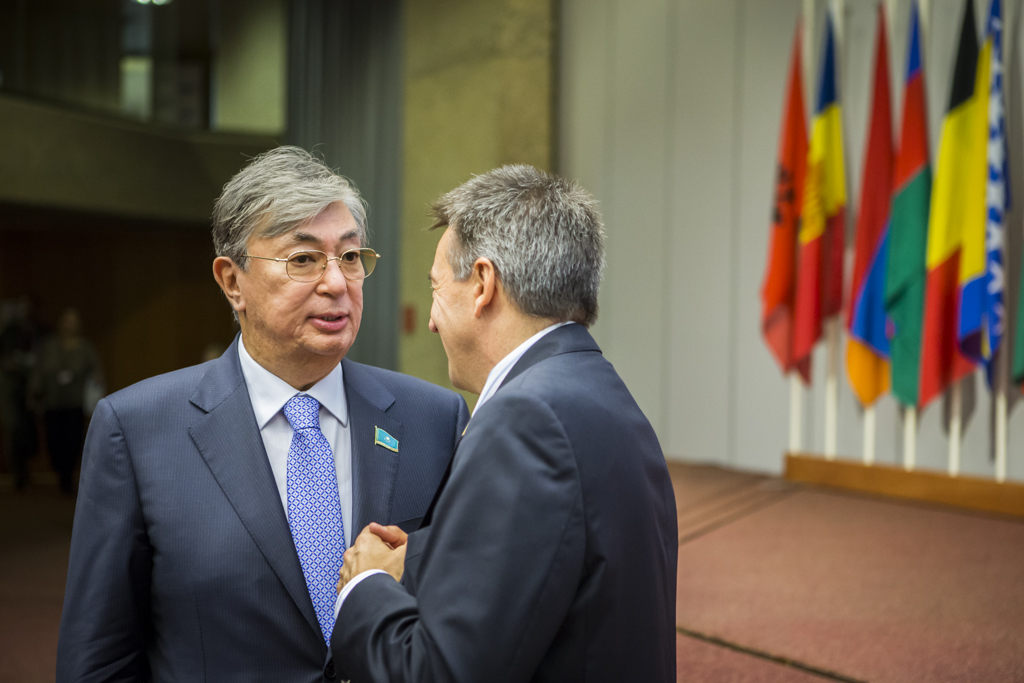 On June 9, 2019 the Republic of Kazakhstan elected Kassym-Jomart Tokayev as the country’s new President. Tokayev’s election follows the resignation of Kazakhstan’s presidential incumbent, Nursultan Nazarbayev, who led the country since the fall of the Soviet Union in 1991.

For most citizens, the recent elections were the first time Nazarbayev was not featured on the ballot. Nazarbayev stepped down from the presidency in mid-March 2019, appointing Tokayev, the speaker of the upper-house of Parliament, as the country’s interim leader. Leading up to the presidential elections, which had a total of seven candidates running for the position, Tokayev maintained the position that voting for Kazakhstan’s new leader was “absolutely needed” to further guarantee “continuity, predictability, and stability” in the country.

With approximately 71 percent of total votes, Tokayev was elected as leader of Kazakhstan, defeating his six opponents.

Tokayev’s political history in Kazakhstan is extensive, serving as Prime Minister of Kazakhstan from October 1999 to January 2002, and Chairman of the Senate for several years preceding his Prime Ministership, among other roles. Tokayev’s prominence in Kazakh politics has led him to serve under Nazarbayev for the entirety of his political career.

Referred to as “the political child” of Nazarbayev, many view Tokayev’s leadership as hand-picked, with election results being predetermined. This belief  led to a massive wave of demonstrations on election day, where 500 protestors were detained by police forces. The protests against Tokayev’s win occurred for two more days, with nearly 1000 protestors detained.

The protests are a sign of a Kazakh people frustrated with the policies of their government — namely those which routinely crack down on freedom of expression, leading to a Kazakh people’s inability to express any sort of government criticism or opposition.

Most police arrests report the use of force against the peaceful protestors. However, Kazakh police have stated that several protestors were trying to prevent citizens from reaching their polling stations. Their actions were described by police as “radical,” with the goal to “destabilize society.”

Expressed in the viral #QazaqKoktemi and #MenOyandim (translated to‘Kazakh spring’ and ‘I woke up’) hashtags on Twitter, the protest message is clear: the democratic transition in Kazakhstan is deceiving, with the need for more substantive change. Pro-democracy activist Dimash Alzhanov discussed the desire “for profound political reforms in Kazakhstan” days prior to the protest, adding that “great powers concentrated in one person’s hands lead to the usurpation of power,” with reference to Toyakev’s election.

While Tokayev is indeed the leader of the country, it is believed that no true change will occur under his administration. As a matter of fact, despite Nazarbayev’s resignation from the presidency, he still maintains the title as the head of Kazakhstan’s Security Council, and is the chairman of Nur-Otan, the country’s ruling party in Parliament. In addition, Tokayev changed Kazakhstan’s capital name from Astana to Nur-Sultan, in an effort to honor the outgoing President. Following Tokayev’s appointment to the Presidency in March, he has stated that Nazarbayev would be consulted for any key political decisions to be made in the country’s future.

The Organisation for Security and Co-operation in Europe (OSCE) has stated that the recent Kazakh elections presented “clear violations of fundamental freedoms.” This position was voiced by the OSCE after 300 observers affiliated to the organization supervised the elections.

The OSCE  reported incidents of ballot box stuffing and lazy vote counting. Election runner-up, Amirzhan Kasanov expressed that protestors could have been individuals from Kazakhstan’s “foreign-based opposition,” who pressed citizens away from participating in the elections.

In an interview with Euronews, Tokayev acknowledged the protests and stated that “[his] job is to analyze [protestors’] demands. To listen to the people who have taken to the streets.” Tokayev has also stated that the criticism regarding his election is just an “opinion,” and that “[his] opinion is that, generally, the elections were fair.”

While accusations of election fraud persist, it is to be noted that Kazakhstan’s democratic transition away from Nazarbayev, who led for nearly thirty years, is extremely significant for the country. Aleksei Borodavkin, the Russian Ambassador to Kazakhstan remarked: “a truly historical event happened in Kazakhstan — a president has been elected.”

The Russian Ambassador went on to say that the recent election “marked a new stage of Kazakhstan’s development.”  Some observers of the election outside the OSCE have broadly supported Tokayev’s win, citing the importance his role will play “to continue [Kazakhstan’s] democratic transition and keep the economy stable.”

Beibut Atamkulov, the Kazakh Foreign Minister noted how the recent elections are a test to the “maturity of [Kazakhstan’s] democracy.” If successful, Kazakhstan’s growth as a nation will be essential for the country’s international ties and political alliances. Kazakhstan’s economy has been steadily growing since the fall of the Soviet Union, providing an optimal environment for business and foreign investment in the country.

In addition, Kazakhstan’s oil, mineral and uranium reserves, as well as their carbon stocks, place them as a serious economic contender in the region. Following the election, Russian President Vladimir Putin congratulated Tokayev, mentioning his victory as a reason for which Kazakhstan could continue to expand their bilateral ties with the Russian Federation. Furthermore, Kazakhstan’s geopolitical relations in the East are integral to the advancement of China’s Silk Road Project.

With growing economic interests in the East, Kazakhstan still maintains a significant relationship with the West. In addition to being a member of the OSCE, Kazakhstan held a seat on the United Nations Security Council from 2017-2018, and pledged to the European Union’s Enhanced Cooperation and Partnership Agreement in 2015. The country’s positive relations with Eastern and Western allies helps define Kazakhstan as an emerging political actor in Central Asia. As such, the preservation of Kazakhstan’s international partners is essential under the new administration.

With this in consideration, Tokayev’s role in helping soothe the democratic transition and prevent backsliding is crucial to Kazakhstan’s advancement and stability in the social, political, and economic realms. Kazakhstan’s post-Soviet history has established the country’s foreign policy as neutral, with the country maintaining significant relations with Russia, China, and the United States. Kazakhstan’s economic relations are therefore multi-vectored. As such, Kazakhstan’s efforts to implement democratic reforms are seen as a positive way in which the country can advance its economic diplomacy on all fronts.

In post-Soviet Kazakhstan, where the previous generation was occupied with preserving stability following the fall of Communism, striving towards democratic ideals was not of utmost priority.  The tide in Kazakhstan is now changing. With the new presidential transition taking place, youth are now ready to dismantle the authoritarian tendencies of their government. The recent protests point to a post-Nazarbayev political world in Kazakhstan where there is not only longing for more political freedom, but the mentality that more freedom can actually be achieved.  It is with this awakening among the youth that true change can be implemented.